When Caroline Hartnell asked me to write an article about the process of putting together, and subsequently working with, the group of people who fund and support the Elders, she asked me to be sure to include all the nitty-gritty – the downsides as well as the upsides. But to be honest there really wasn’t much nitty-gritty to write about.

The process has been extraordinary from the very beginning. One reason is certainly the people who have been involved and a second is undoubtedly that we had already learned some key lessons from our earlier experiences of partnerships.

When we started Virgin Unite about six years ago, we spent months listening to frontline organizations to find out what they wanted from the Virgin Group. One of their overwhelming responses was marketing and communications skills. To respond to these needs, we posted a job ad for someone to join us with strong marketing and communications experience to leverage these skills from across the Virgin Group to support frontline non-profit organizations. Within a couple of hours of posting this role there were over 1,000 emails in my mailbox linked to a raging debate among social sector professionals about whether it was appropriate for Virgin Unite to be hiring a marketing/communications specialist and vilifying us for bringing someone with strong business skills into a charitable organization.

As the emails continued to flood in, we realized the great need for a revolution in the way that the business, government and social sector work together if we were ever going to truly drive the scale of the change we need in the world. In doing our bit to help foment such a revolution, we’ve learned a number of lessons.

Of these, probably the first is the importance of shared values. We always look through an entrepreneurial lens that focuses on how we can create new approaches to age-old issues, and we’ve found that some organizations are just not wired that way, so now we try and really define a shared set of values and clear vision at the start. The trick is finding others that are willing to think big and be persistent in the inevitable face of disbelievers. A partnership should never be about ownership and branding, but instead about the best way to make the whole better than the parts and go to scale with the change you are trying to make. Sometimes we’ve got carried away with the excitement of an idea and the passion of the people behind it and rushed into partnerships without analysing deeply enough whether they were the best fit.

Having said that, we’ve found that some of our best partnerships have been with organizations that are radically different from ours, as each brings to the party unique skills – as long as the shared values are there as a foundation.

But a shared vision of the future potential may not be enough. It’s always worth taking the time to map out clear roles and responsibilities and agree impact measures – and we’ve found this works far better when outlined at the start of the relationship.

If, despite all this, it isn’t working, don’t be afraid to walk away in an ethical manner. In the past we’ve stayed in relationships far too long and caused needless stress on both sides.

Working with the Elders

These principles have led to some unlikely but fruitful marriages. Probably one of the best examples is the group that came together to support the Elders initiative. When Peter Gabriel, Richard Branson and Nelson Mandela came up with the idea of the Elders a number of years ago, one of the elements they identified as central to its success was the creation of ‘an engine’ that would not only provide the group with financial support but also help them to leverage their work further and bring to the table a range of experience and resources. We wanted to build this engine from a select group of 10 to12 partners who would join forces with the Elders and guarantee them the independence that they needed in order to succeed. It needed to be a true partnership rather than a typical donor/grantee relationship.

As the Virgin Unite team tried to assemble this group, the initial meetings with potential partners were challenging. Some people looked at us in disbelief when we described the scale of the vision for the Elders. But slowly we started to build a small group of ‘believers’. Kathy Calvin and Michael Madnick from the UN Foundation were among the first. Pam Omidyar and Randy Newcomb from Humanity United and Ray Chambers also came on board at an early stage. From that nucleus, the idea started to blossom and the potential partners meetings got easier.

By May 2007, the project was gaining pace. An initial group of Elders had accepted the invitation from Nelson Mandela and Graça Machel to join and they convened their first meeting. At this meeting, they decided to launch the Elders publicly on Nelson Mandela’s 89th birthday, 18 July 2007. With less than six weeks’ lead time, and as yet no management team in place, a frantic scramble began to bring on board the rest of the partners.

Others joined over the next few weeks – and miraculously we reached our goal to raise $18 million for core funding before the launch. More importantly, we had put together the group of organizations and individuals that would form the Advisory Council to provide ongoing support to the Elders.

One fundamental reason the partnership between the Elders and the Advisory Council works is a strong shared set of core values and sense of purpose. These core values include being open, transparent and honest in all we do; assuming the essential goodness and interdependence of all humankind; willingness to tackle complex and difficult issues; dedication to peaceful conflict resolution; leadership through wisdom; and always remaining humble.

Another key factor is respect for the Elders’ independence. The Advisory Council remains closely engaged in discussion with the Elders about their activities, but when it comes to decision making, the Elders set their agenda, and the dedicated management team led by CEO Mabel van Oranje implements it.

Something we learned early on was the importance of making sure that there is always an ongoing dialogue among ourselves so that everyone feels connected and we can leverage the skills, assets and connections of Advisory Council members to support the Elders in their work. This is done through a combination of regular calls, online updates and face-to-face meetings. There have of course been the inevitable ups and downs as there are in any start-up or partnership. We certainly could have done a better job of formalizing roles and responsibilities at the start, and created more frameworks for engagement … the list goes on.

Any strong, healthy relationship takes time to build. Listening and understanding the needs of each partner is critical to getting the most from the relationship, as is just spending time and having fun together. Over the last three years, trust has grown and strong relationships have been built among Advisory Council members, management team and the Elders themselves. Much has already been achieved, as Ray Chambers describes, and the potential for this group to do more to serve humanity is great. 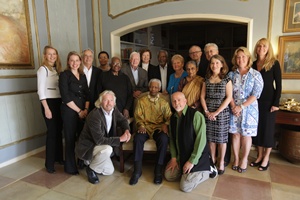 Founded in July 2007, the Elders is an independent group of global leaders who offer their collective influence and experience to support peace-building, help address major causes of human suffering, and protect the interests of ordinary people around the world. Nelson Mandela and his wife Graça Machel are the founders of the Elders and Archbishop Tutu chairs the group. Mandela has now retired and is an honorary Elder, as is Aung San Suu Kyi, recently released after 15 years under house arrest in Burma.