How can we raise our game? 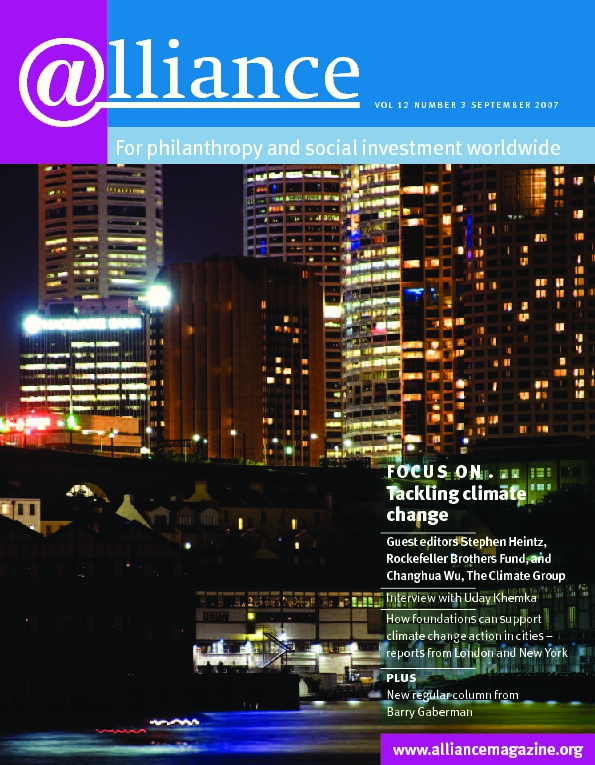 Despite high levels of media coverage of climate change, there are few signs of significant changes in public behaviour. Public concern about climate change is growing everywhere. In the UK, for example, more than 70 per cent say they are worried about the issue and most accept that it has a human cause, yet only 7 per cent of people believe they can do anything signficicant to arrest it.

By 2005 just 212,000 people in the UK (under 1 per cent of households) had switched to green electricity tariffs, while just 2.5 per cent of lightbulbs sold each year are energy-efficient. With more and more NGOs developing campaigns to try and directly influence public behaviour, how can funders help?

Learning from our mistakes

First, they can demand that their grantees take up the findings from research into the barriers to environmental behaviour change. Think-tanks, specialist communications consultancies, university departments, consumer organizations and government departments are all active in this sphere, and their recommendations often overlap. Yet little of this expertise seems to find its way on to the ‘shop floor’ of the environment movement, or indeed into government-backed campaigns. For example, the recent Live Earth concerts could have benefited hugely from lessons learned regarding the difference between information and motivation.

Most of us give little conscious thought to many of our everyday activities, which means that communications based on the idea that we are rational beings who carefully evaluate the cost of each choice may be mistaken. We have a strong tendency to discount the future and any delayed benefits from change, worrying much more about what we perceive as immediate losses. Social norms and peer pressure are also vital, and stories about ‘real’ people taking action are compelling.

Findings from communications research can help organizations address common challenges in environmental communication, including the provision of some kind of reward for good deeds, whether social kudos or cash prizes. Recycling lotteries, for example, where members of the public put their name on cartons they recycle and these are then entered into a lottery. Other challenges include the ‘I will if you will’ factor, in which enthusiasm to take action is greatly increased if there is an expectation that other people will join in.

Questions of social status and aspiration are also fundamental. For most people in the UK, high social status is attached to driving upmarket cars and flying frequently, while improving the energy efficiency of their homes brings little or no increase in status. For many people, environmental behaviour change continues to be associated with deprivation, hardship, rationing, guilt and self-sacrifice.

Funding innovation in this field

A second practical way in which funders can help address these problems is by supporting cutting-edge work and experimentation. This includes the use of tools such as Values Modes, a way of dividing up the public within a given country into 12 groups based on their fundamental psychological needs and motivations. Different groups may need entirely different messages (and messengers) in order to take the same action, depending on the values and motivations that matter to them.[1]

Further analysis of the way in which climate change is ‘framed’ in the media is also vital. Innovative work in the US, funded by the Turner Foundation, revealed that many of the ‘frames’ used in climate change stories were immobilizing and disempowering members of the public, with a disconnect between the cataclysmic language used (including by many NGOs) and the steps the public are being encouraged to take to address it, such as changing their lightbulbs. The Institute for Public Policy Research in London has been at the forefront of analysing the framing of climate change in the UK in recent years.

Finally, grantmakers could and should collaborate and pool their knowledge on these issues, as well as encouraging greater discussion among grantees. Work on values systems, motivation, and the framing of issues is directly relevant to social change on many issues besides global warming. We have the means to raise our game. Let’s do it.

1 Chris Rose of http://www.campaignstrategy.org has been at the forefront of using Values Modes research in relation to climate change.

For more information
Go to the climate change resources paper at http://www.alliancemagazine.org or the resources section of http://www.greenfunders.org