Nourishing the grassroots to fight inequality

Current media coverage of Brazil shows a country that is emerging as a major international player, propelled by strong economic growth and a charismatic president. The financial crisis did not affect the BRIC economies with the same intensity as it did the main developed economies. Over the last years, social income transfer policies have removed a great number of the country’s people from poverty and misery. All these factors have contributed to an image of a country that is rapidly overcoming social injustice by democratic means. Despite this positive image, grave inequalities remain part of the fabric of Brazilian life. It is to these inequalities and those groups that fight against them that the Brazil Fund for Human Rights addresses itself.

Brazil remains one of the most unequal countries in the world, a product of a history of labour exploitation, including slave labour, and the restriction of rights to a minority of the population. Democracy does not automatically wipe out injustice. A democratic government is not in itself sufficient to promote human rights. In Brazil, political life is tainted by corruption while the state remains in the hands of private interests. The richest 10 per cent of the population appropriate approximately half the country’s total revenue, while the poorest 50 per cent, the majority of whom are of African descent, get only a tenth of it. Over half of Brazil’s population owns less than 3 per cent of its rural property; 46,000 proprietors, in a population of 190 million people, own half of the land in a country where the rights of Indigenous peoples and traditional populations[1] are often seen as an obstacle to the demands of the rich and powerful. Mass media are in the hands of a few wealthy families and defend a status quo from which those families profit.

A movement of small groups

Ever since the period of the struggle to overthrow the dictatorship (1964-83), Brazil has seen an intense mobilization of civil society organizations − social and popular movements, women’s groups from the peripheries, urban and rural unions, small-scale farmers’ organizations, organizations that fight against discrimination on the basis of race, gender and sexual orientation. In short, they represent a diverse and complementary set of interests that aim to construct a more just and democratic country that respects human rights and promotes sustainable development. They are also active internationally, where Brazil has become increasingly prominent, for example through the World Social Forum, which began in Brazil in 2001.

While these organizations are not sufficient to bring about profound change themselves, they are essential to define the meaning and nature of a process of national transformation, since they tackle the root causes of social violence rather than the symptoms, and play an active part in pushing the country to overcome various forms of discrimination.

The problem of funding

Brazil’s human rights movement is made up of small local groups with scant access to resources. There are few native sources of human rights funding, and funding from international donors − traditionally the mainstay of Brazilian CSOs − has dwindled as the country’s economy prospers and donors move elsewhere. As a result, the future of the movement is under threat, especially small organizations and grassroots movements that represent the weakest in society.

Traditional Brazilian charity, which is often based on religious values or institutions, alleviates the suffering of the impoverished but also frequently reinforces the unjust structures of Brazilian society because it is non-political and does not deal with the causes of injustice.

It is in this context that the Brazil Fund for Human Rights was established in 2005. Activists in the field of human rights, concerned with the maintenance and encouragement of small grassroots organizations fighting for the rights of those who have been denied the fruits of development, decided to set up an organization to raise funds to support these initiatives. The objective of the Brazil Fund is to stimulate the growth of a healthy and efficient human rights community that is capable of acting at all levels of Brazilian society. The focus of our work is to combat violations of the rights of socially vulnerable groups, such as children and adolescents, women, blacks, indigenous peoples and traditional populations. During its first years of operation, priority has been given to projects combating institutional violence (any form of human rights violation practised by official institutions or companies) and discrimination, especially where related to race and gender. If there is a lack of available funds for the promotion of human rights in the country generally, it is in this area that it is most keenly felt.

The Brazil Fund received its first resources from the Ford Foundation, which helped establish the project, provided an initial endowment, and enabled it to distribute the first grants. From this point, we have sought new funds, investing particularly in building a local constituency, so as to expand its operating capacity. 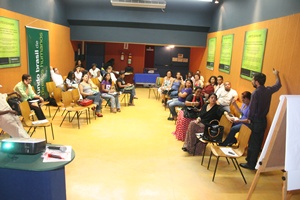 In order to accomplish its goals, the Brazil Fund has chosen first to support small organizations and individuals, especially those with little or no access to other sources of funding. The purpose is to strengthen them by creating local funding mechanisms to guarantee their sustainability and to help ensure their autonomy. We select projects by means of annual calls for proposals, and we also provide small grants for emergency needs. We offer training and capacity-building sessions (pictured), convening grantees at annual meetings to reflect on cross-cutting issues in the human rights field, and providing them with networking opportunities. In only four years of operation, we have received some 2,900 proposals and made 108 grants, which represent approximately US$1.5 million for project support.

The importance of project selection

Project selection is the key activity for the Brazil Fund, involving the staff, members of the board, trustees and an independent committee of experts from the human rights community. The involvement of activists and professionals with in-depth knowledge of the human rights field allows us to identify creative and innovative proposals that answer the real needs of the people or communities in question. Geographical and thematic diversity are also fundamental for reaching some of the country’s most vulnerable social groups.

Among other examples, the Brazil Fund has supported a campaign against the killing of black youths in the state of Espírito Santo, based on statistics showing that young blacks in the state suffer a disproportionate degree of violence and murder. We have also attempted to empower strategic initiatives like the anti-racist movement, the drive against homophobia, the fight against sexual exploitation and trafficking of girls and women, and the struggle for the rights of landless people, in both urban and rural areas. We seek to embrace a broad range of fundamental human rights, aiming specifically at the most invisible segments of our society, including informal workers, prostitutes, adolescents in juvenile detention, ethnic minorities such as gypsy women, and refugees.

Several factors lie behind the decisions the Brazil Fund has taken about the directions it will take: the unjust and unequal situation of whole sections of society in spite of the improvements over the last years; the existence of structural forces that consolidate such unjust conditions; the withdrawal of international resources; and, most of all, the importance of the existence of grassroots initiatives consisting of the victims of these injustices. In order to respond to these needs, we intend to raise more domestic funds, devoting more energy to approaching corporate and individual donors as well as governmental institutions. The goal is to expand our capacity to support those who have been denied the benefits of the development process, helping them in their efforts to be the protagonists in the transformation of a society that produces and reproduces injustice and marginalization.

1 Indigenous peoples are native peoples with specific rights. Traditional populations are local communities living under traditional lifestyles, with intrinsic links to and special knowledge of the environment and natural resources, such as rubber tapper communities or traditional fishermen communities.

Ana Valéria Araujo is the executive director of the Brazil Human Rights Fund and Sérgio Haddad is president of the board of directors. Emails avaraujo@fundodireitoshumanos.org.br and sergiohaddad@terra.com.br