Private actors in the public arena

‘The Gates Foundation just does so much good. Who are we to criticize them?’

‘What do you mean, they’ve done good? Who are they to think they know anything about schools? Bill Gates is not an educator!’

My students were debating a case study on the role of the Gates Foundation in influencing education policy. On the board, I’d written a question – ‘Bill Gates: US Superintendent of Schools?’ – and asked the class to discuss how much influence a private philanthropic foundation should have on public policy. While I knew that the topic might be provocative, I was caught off guard by the strong feelings the students showed, ranging from acclaim for the Gates Foundation’s ‘good work’ to antipathy about its ‘arrogance’.

This debate is not new. Such questioning, however, has not arisen in any substantive form since the late 1960s, and certainly not in the context of mega-foundations such as Gates. Gates has followed the path of other large foundations in the US that engage in efforts to influence government policy four times more frequently than their smaller peers.

Intrigued by what I saw in the classroom, I began exploring the range of views about what foundations should be able to do politically, and the positives and negatives of constraining vs enabling their actions within public policy arenas. In interviews with nearly 40 people – foundation presidents, policy officers and pundits – several themes have consistently emerged.

The central tension in perceptions is whether foundations are ‘undemocratic’ institutions that assert private preferences for social order without accountability to the public or whether their unconstrained nature is a public asset because it allows them to catalyse innovation and to take risks and experiment with social programmes in ways that the state cannot – actions ultimately beneficial rather than detrimental to democracy.

This tension points to an important debate about the role of foundations as policy actors. This debate is not unique to Gates, but rather Gates’ sheer size and influence brings the debate into sharp relief. Since 2008, Gates’ payout requirement has increased to approximately $3 billion per year, or $8 million a day, and its priorities have also shifted heavily towards influencing public policy as a central value. One Gates official’s description of the foundation as a ‘1,600 pound gorilla’ (twice the size of the idiomatic gorilla) is apt.

Criticisms of Gates centre on field-wide convergence around its preferred priority areas, and its potential to privately determine policy agendas due to its size and influence. One interviewee summarized this concern: ‘Anybody who cares to look would find very quickly that all of these organizations suddenly singing from the same hymn book are all getting money from [the Gates Foundation] … it doesn’t seem to generate much scandal, which is just a frightening thing to me.’ This convergence is also viewed as positive, however, as Gates is praised for its ability to accelerate policy debates and catalyse government action, using what one informant called its ‘big, booming, resonant voice’ towards the public good. ‘Their voices should be at the table, bringing evidence about the extent of the need in a particular area and how that need can be effectively addressed. That is a very important role for philanthropy…. I think it’s about time that [the voiceless] had big champions like Gates to be able to stand up for them.’ 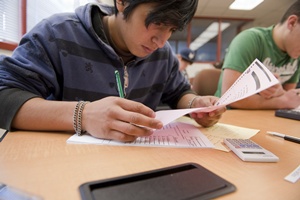 Ultimately, the role of Gates as a major policy actor may be overstated in a historical context. One estimate states that Bill Gates and Warren Buffett would have to give away their entire fortunes 30 times over in order to equal Andrew Carnegie’s and John D Rockefeller’s contributions relative to government spending in their respective eras, and a number of interviewees described the foundation’s resources as a ‘drop in the bucket’. As one Gates official put it: ‘Public education spending in America is about $500 billion a year, and education philanthropy is about $1.5 billion, and we’re about a third of that.’ Additionally, as Bill Gates himself has argued, ‘the education system is always decided politically’. Indeed, in the Gates Foundation’s home state of Washington (pictured: Gateway to College students taking their final maths exam at Lake Washington Technical College, Kirkland WA) charter schools are not authorized by law, despite being a Gates priority. Why, then, should any concern exist about Gates as a political actor?

Private actors in the public arena

The real debate, I argue, is not about the Gates Foundation and its vision and goals, but about more fundamental questions regarding the appropriate role of foundations as private actors in the public arena. Foundations tend to be associated with normative conceptions of ‘good’ – who can argue with providing schools for poor children, or vaccinations in developing countries, or investing in libraries in urban communities? And even if some of these reforms fail, isn’t it worth the risk to potentially discover a major innovation with broad impact? The problem, at its core, lies with the few institutional controls that might keep foundations accountable to what is ‘good’ and responsible to those whom they fail.

The controls that do exist are primarily bureaucratic in nature and therefore do not do much to address the critique of an ‘undemocratic’ institution. Foundations are prohibited from lobbying and directly influencing legislation, but beyond these limited mechanisms, they can still exercise policy leverage well within the limits of the law – which rationalizes calls to limit their influence, whether you agree with them or not. Are there steps that Gates and other large foundations could take that would guard against lack of accountability without shackling foundations to public whim or bureaucratic ossification?

In order to maximize the benefits that foundations like Gates can bring to democracy – including innovation, elevating discussion and resource agility – there are a number of ‘soft norms’ that they could, but don’t often, employ. Many foundations still do not engage communities and grassroots organizations in their reform efforts. Governing boards typically do not include representatives from funded organizations or from affected communities. Heightening the concern about the Gates Foundation in particular is that its board is composed of just four people (Bill Gates, Melinda Gates, William Gates, Sr and Warren Buffett). Furthermore, many foundations – including Gates – remain relatively inaccessible to the average citizen, from accepting only solicited grant proposals to not sharing staff members’ contact information (probably due to the sheer magnitude of the workload, rather than an intentional desire to limit access). Including grantees in governing decisions, engaging affected communities to a greater extent, and increasing accessibility are all plausible democratic mechanisms of input and dialogue that would help address critiques regarding their effect on democracy.

Finally, foundations could more proactively embrace discussion and debate of their role in democratic societies and the decisions they make. Many foundations are loath to expose themselves to critique from government and the public, but this has resulted in a ‘culture of diffidence’, according to Duke University’s Joel Fleischman, where dissent and critique are discouraged and those who raise such questions – whether journalists, grantees or scholars – are blacklisted. But questioning the central role that foundations play in developing and institutionalizing policy reforms is crucial in order to enable the American public to be more critical consumers of reform measures and policies that affect them – positive or negative.

It’s possible that the greatest impact the Gates Foundation will have is fostering a debate on appropriate policy for foundations in a democratic society – for the first time in decades.