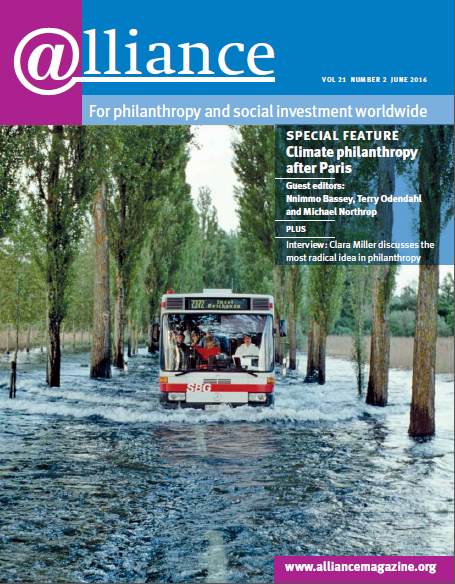 Writer William Gibson is quoted as saying, ‘The future is already here, it’s just not evenly distributed.’ When asked about the quote, he replied: ‘I’m not trying to predict the future. I’m trying to let us see the present.’ So it is today with climate change. The world must reach zero fossil fuel CO2 emissions by 2050. We already have the tools and technology to see the present and solve the problem of greenhouse gas (GHG) emissions, but they aren’t evenly distributed. When it comes to the built environment, philanthropy can help with that distribution.

Since cities are responsible for over 70 per cent of global energy consumption and CO2 emissions, mostly from buildings, this will only be possible by dramatically reducing citywide building sector energy demand and emissions. The opportunity to do that is here: over the next two decades, a staggering 82 billion square meters (883 billion square feet), an area roughly equal to 60 per cent of the total building stock of the world, is projected to be built, and rebuilt, in cities worldwide.

‘Over the next two decades, a staggering 82 billion square meters (883 billion square feet), an area roughly equal to 60 per cent of the total building stock of the world, is projected to be built, and rebuilt, in cities worldwide.’

The majority of worldwide urban development over the next two decades is projected to take place in China (38 per cent), North America (15 per cent) and India (9 per cent), followed by Southeast Asia, Latin America and Africa. A number of cities have committed to cut their GHG emissions by 80 to 100 per cent by mid-century. A group of these cities mostly from North America – Vancouver, Seattle, New York City, Boston, Washington DC, San Francisco, Boulder, Cambridge MA, Palo Alto, Austin, Burlington VT, and Phoenix – along with London and two states (New York State and California), recently came together to map out how these targets could be met. Steps include:

And by 2050, cities must renovate their entire existing building stock to high-performance standards by mandating energy efficiency upgrades, meeting advanced energy codes at critical building intervention points (for example, zoning or building use changes and point-of-sale), and providing appropriate incentives to do so.

‘By 2050, cities must renovate their entire existing building stock to high-performance standards by mandating energy efficiency upgrades, meeting advanced energy codes, and providing appropriate incentives to do so.’

Their success will depend on the ability to scale ZNEm to urban areas worldwide. This will include effectively distributing current sustainable planning and building design strategies and tools, advanced code development and information, and renewable energy technologies – especially in areas mentioned above where the largest amount of construction will take place over the next few decades.

Philanthropists can help achieve ZERO by focusing on the development of advanced and ZNEm building energy standards and codes. They can enable targeted emissions reductions campaigns and support programmes for the built environment in these countries and leading-edge cities.

For example, the development of advanced and ZNEm building energy standards and voluntary codes in the US by a coalition of organizations ­– Architecture 2030, New Buildings Institute and the American Council for an Energy Efficient Economy – is under way with federal assistance and with the guidance and financial support of foundations such as the Rockefeller Brothers Fund and the Energy Foundation.

The infrastructure developed around ZNEm campaigns will provide other benefits as well, such as urban planning and building design for climate resilience. Providing the appropriate financial assistance to develop implementation strategies, training, tools and monitoring will be critical to success. It is the perfect present investment for the future of our planet.