How to set up a university centre with foundation money

EFC – EFC continues to be active in convening role

Effect to focus on diversity

Reflections of an Alliance magazine Intern

Funding a university centre is a risky endeavour for all parties. Donors usually have less control over the results than in other cases and the university takes the risk that future costs will have to be covered through its own budget. The creation of the Center for Philanthropy Studies (CEPS) at the University of Basel offers some insights on how to create, and plan for the sustainable existence of, an institute with initial funds from foundations.

In 2007, SwissFoundations, the Swiss association of grantmaking foundations, sent a request for proposals to four Swiss universities, inviting them to apply for funding to set up a centre for foundations and philanthropy.

The idea was to create a central institution for interdisciplinary research on philanthropy that would encourage and increase both the gathering of knowledge and putting into practice. The initial grant was CHF2.5 million for five years, allowing for the financing of a professor and two assistant positions. Six foundations, all members of SwissFoundations, participated in the funding. The universities were selected on the basis of previous research and teaching activities in the field of philanthropy.

The idea was to create a central institution for interdisciplinary research on philanthropy that would encourage and increase both the gathering of knowledge and putting into practice.

After six months, two universities provided a submission with a business plan, research agenda and the commitments they were prepared to make. A jury of foundation representatives selected the University of Basel. 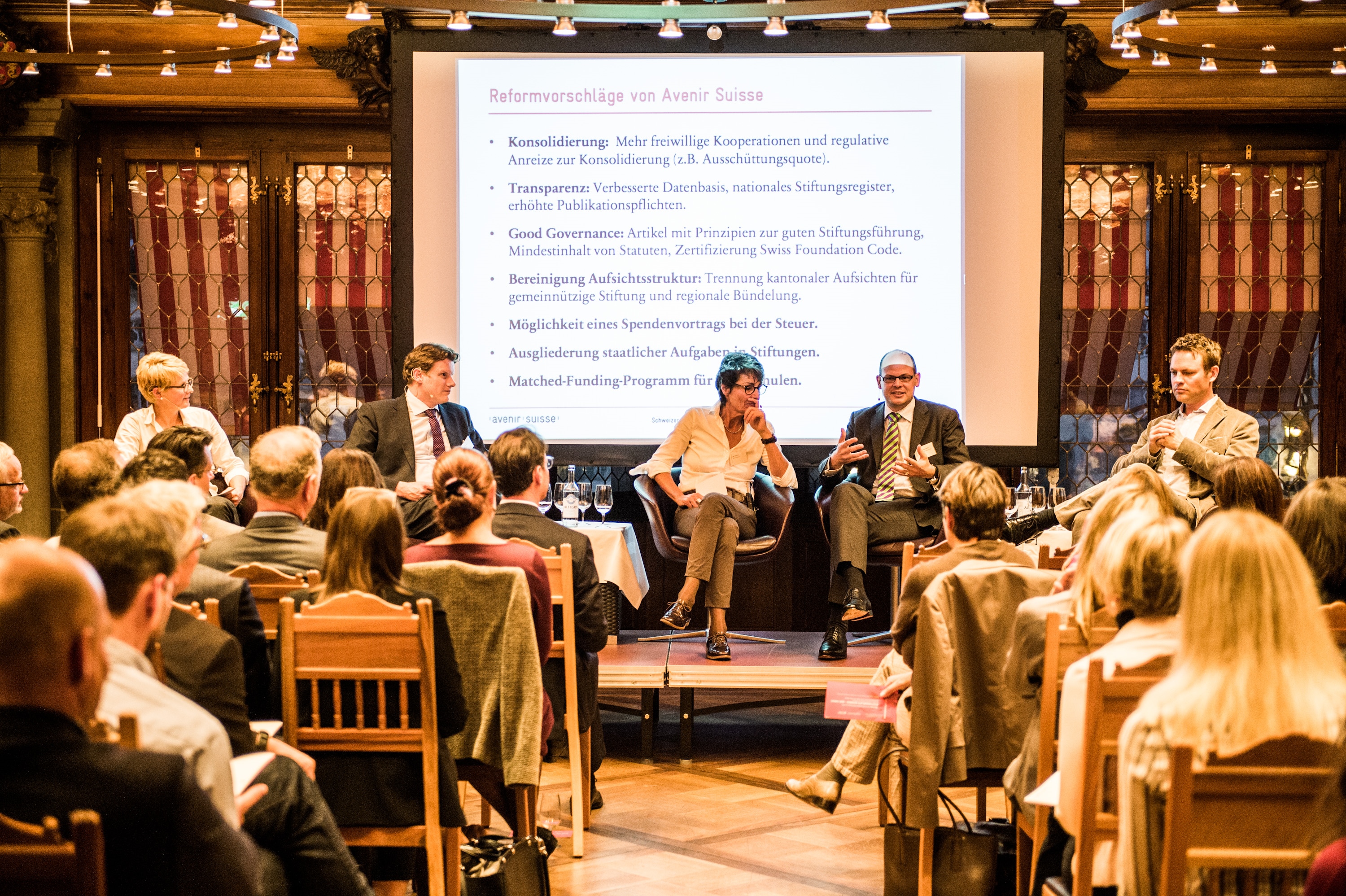 Beate Eckhardt and Georg von Schnurbein at the opening ceremony of CEPS becoming a university institute of the University of Basel in 2014.

In November 2008, CEPS was officially inaugurated as part of the faculty of business and economics and started with an assistant professor and two collaborators. The donors and the university agreed to conduct an evaluation after two years based on university standard procedures.

As a result of this evaluation, the university decided to create a chair on foundation management for the director position of the centre. Additionally, SwissFoundations organized a second consortium of nine foundations for a second grant of CHF2.5 million for another five years.

Currently, 15 collaborators work in fields of research, lectures, executive training and coaching. CEPS has increased the understanding and operations of the philanthropic sector in Switzerland through publications such as the Swiss Foundation Report – together with University of Zurich and SwissFoundations – and earned a high reputation in both research and practice.

Looking back, many factors in the selection and organization contributed to this success. First of all, the fact that SwissFoundations took the lead brought a lot of convening power to the initiative and opened the doors to the future funders and supporters of CEPS.

The request for proposals opened up a competition between different models. Instead of addressing one university, SwissFoundations demanded a primary commitment through the deans of the universities to participate in the pitch. Two universities declined the request.

In addition, from the application documents, the foundations got a good idea about the research agenda, the organizational structure and the network involved. Finally, the period of selection gave all parties involved enough time to get prepared. At the time of the inauguration, CEPS was ready to work. The first one-week executive training started only four months later.

The request for proposals opened up a competition between different models.

Additionally, representatives of SwissFoundations and funding foundations were included in an advisory board. This arrangement allowed for a clear separation of roles, while different feedback options, regular reports and the evaluations served as trust building activity.

Altogether, establishing CEPS was a major step in the short history of SwissFoundations and also served as a model of collaboration for foundations beyond the field of research. Aspects of competition, clear separation of roles, guarantee of academic freedom, and a long-term commitment served as major success factors.

I read with interest the process described in a dialogue between foundations and a University, at the former's initiative. The more so because I am in the midst of establishing a Chair in African Philanthropy at the Wits Business School with a continent-wide mandate. The journey so far can be traced back to a meeting in Jinja, Uganda in 2004. The Chair and its post-graduate degree programme should be operational next year. It may be a suitable moment to convene a get together of those involved with the recent expansion of centres for philanthropy within the academy - Edinburgh, London, Basel, Haryana, Johannesburg - as well as those already well experienced to compare lessons and notes. Would foundations be interested in such an idea? Alan Fowler (Prof.)

Studying philanthropy in Canada: from benevolence to impact