Supporting civil society – a dogma for our time? 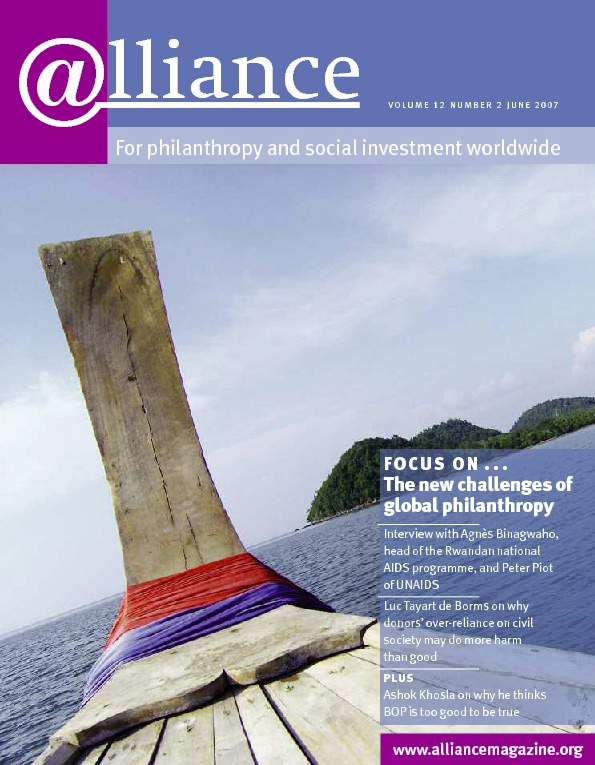 The inordinate power of programme officers

Philanthropic peace and beyond

As today’s foundation leaders grapple with how to effect meaningful change, they must answer two questions: what are the best means to pursue and who are the most effective agents of the change they seek? Civil society organizations have been increasingly lauded as the sole agents of change, but focusing on civil society alone can do more harm than good.

Foundations play many roles in today’s complex societies. They engage in charity, disaster relief, service delivery, redistribution; they foster pluralism and play a complementary role to governments. Some act as convenors, bringing together different stakeholders in a neutral forum to recommend action, thus acting as a catalyst of policy and social change.

But whatever their role, the objective is – or should be – to create public benefit by bringing about real social change. How can they do this in the most effective way possible, bearing in mind their responsibility to society due to their tax-privileged status and their limited public accountability?

As the foundation community comes to realize that throwing money at a problem does not solve it, foundations are increasingly focusing on trying to tackle the root causes of societal problems. The methods used vary depending on the social context and the communities they work in. Some believe they can effect policy change by funding social or scientific research. Venture philanthropists are being lauded as modern-day superheroes as they try to apply market models to complex challenges such as disease and poverty. Some foundations work closely with a broad range of stakeholders with the aim of formulating policy recommendations. Sometimes these approaches work; sometimes they don’t.

Some foundations are taking on a more controversial advocacy role. To resolve the dilemma of representation – aren’t foundations supposed to be politically neutral? – they engage civil society in developing the ‘case’ being advocated by the foundation’s leadership. By doing so, foundations are in effect subcontracting advocacy.

However, in embracing this approach, many foundations are taking a myopic view of real problem-solving. In some instances, this engagement may backfire and do more harm than good.

Subcontracting advocacy is only one aspect of funders’ over-reliance on civil society – this ‘new superpower’, as former UN Secretary General Kofi Annan once called it. In fact, civil society participation can be seen as the new dogma of the 21st century. Many funders believe that if they support civil society the world will change for the better as civil society pushes for – and effects – change both in developed countries and in emerging market economies.

But does such participation wield enough leverage to effect policy change? Evidence points to the contrary. In fact, in some instances, focusing solely on civil society might do more harm than good, particularly in developing countries.

Heidy Rombouts, in a discussion paper prepared for the University of Antwerp’s Institute of Development Policy and Management,[1] argues that in LICUS (Low Income Countries Under Stress) and post-conflict situations, civil society, rather than the state, is considered as an important catalyst for social reconstruction, more because of the lack of a good government than because of any demonstrated contribution by civil society.

A simplistic approach on all fronts

Relying exclusively on civil society participation does not work in developed countries either, where complex problems such as poverty, social exclusion, discrimination, drug policy and healthcare require multidimensional solutions. The levers of meaningful change do not rest in the hands of one particular group and to effect such change requires a more strategic philanthropic approach, involving a diverse range of methodologies – including meaningful multi-stakeholder engagement.

The same is true in emerging market economies, where civil society is usually lauded for going beyond service provision to being a conduit for creating a foundation for stronger democracies built on citizen participation, the rule of law, respect for human rights and transparency. This view is both simplistic and somewhat naive. If civil society holds true to its commonly held definition, it is composed of a patchwork of special interest groups, each armed with its own agenda, each advocating its specific cause, and each representing diverse constituencies.

Rombouts cites four assumptions about the ‘participation model’ that, when absent, contribute to the failure of civil society to deliver. She is talking principally about developing countries, particularly those in conflict or post-conflict situations, but the assumptions can be applied to any country that is struggling with multiculturalism or fragmented societies – and which country is not grappling with these issues?

Further, Rombouts reminds readers that most civil society organizations are not themselves politically neutral. In emerging market economies, LICUS, fragile states, conflict zones and regions such as Central and Eastern Europe, civil society organizations are not always a bridge over troubled waters. By their very nature, many reinforce exclusiveness; their efforts towards building an inclusive society may be skewed towards serving their own interests at the expense of others.

She warns: ‘Donors should be aware of the many risks that civil society participation in these environments may bring about. Yet there is a gap between the studies highlighting the risks and donor practices that largely deny the problematic aspects of civil society involvement.’

Rombouts points out that effective civil society participation requires a government that is willing and able to bring it about. Governments – in all countries – need the capacity and the commitment to make trade-offs and decisions concerning the varying and competing interests of their citizens. However, this precondition is not always fulfilled. ‘In this way, participation may lead to a downward spiral of frustration, intolerance and even conflict. Instead of contributing to democracy … flawed participation may undermine the support for these processes.’

The irony of this is that well-intentioned donors, aiming to support ‘drivers of change’, often select civil society organizations without a proper analysis of the socio-political context. Handpicking, or playing favourites, can be a risky business in all countries.

The solution to this donor dilemma lies not in withdrawing support for civil society organizations, but in better integrating the concept of pluralism into the philanthropic dialogue and choosing the right methodologies, taking care to create a multi-pronged approach that is as inclusive as possible. For example, by bringing different actors around a table, foundations act as ‘convenors’ of interests rather than champions for a select few. Perhaps in this way, foundations can strike the right balance.

There are no guidelines or benchmarks on the best way forward. The balance struck depends on a foundation’s theory of change and the role it envisions for the civil society organizations it engages with. Some foundations view NGOs both as the real actors at grassroots level and as pressure groups at a higher level and so believe that funding civil society is the way forward. Others are sceptical about the sector’s credibility and capacity and prefer to do the work themselves. The jury is still out. Pending its verdict, it might be worth heeding the precautionary note Rombouts and other authors have sounded.