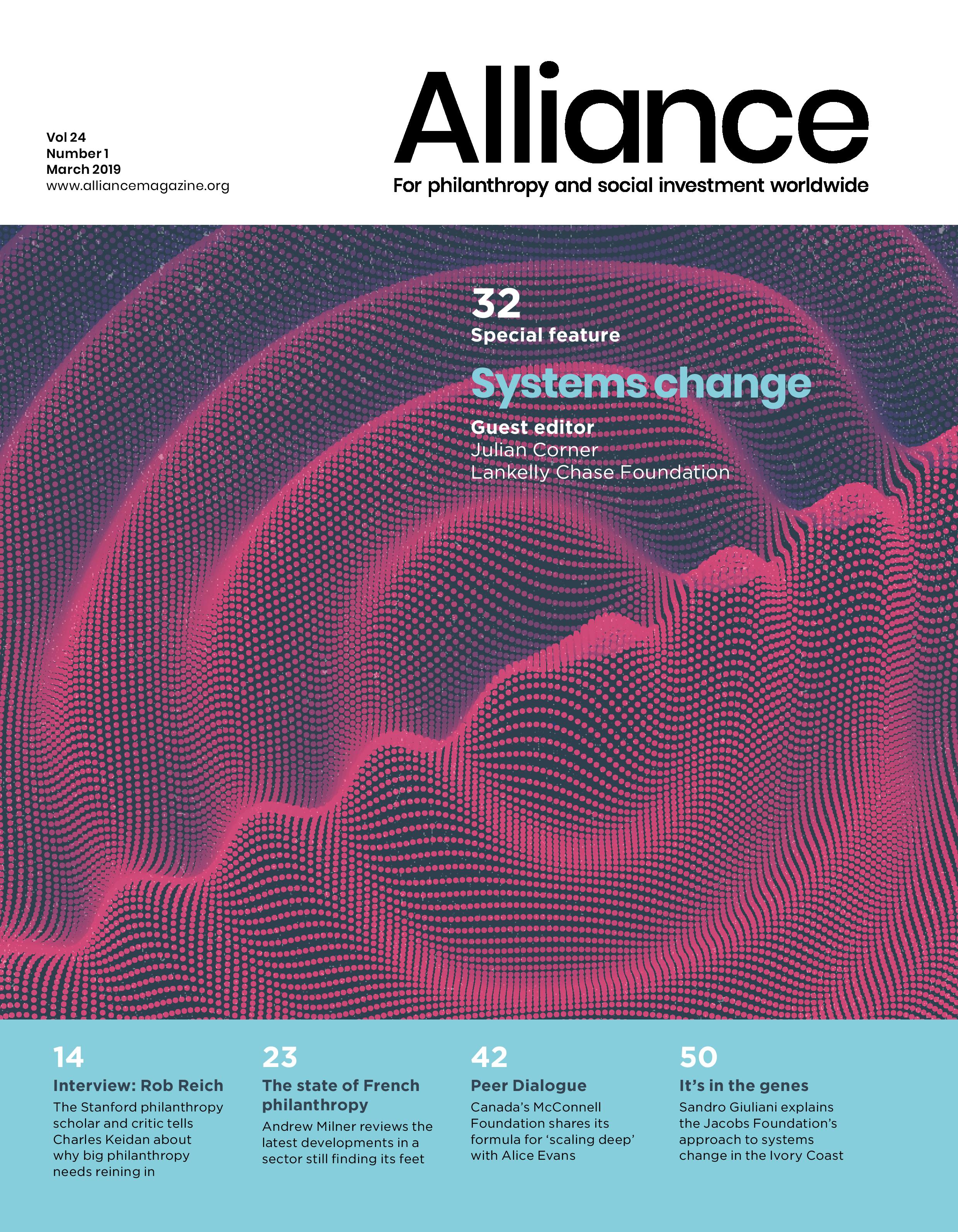 Half of UK foundations reducing grantmaking but philanthropists barely affected

Giving in the Recession

This special feature explores a growing aspiration in philanthropy to achieve system-level change. It looks at the potential and pitfalls by profiling a number of approaches adopted by different foundations.

Where to begin? This is a perennial question when working with systems. If everything is interconnected, there is rarely an obvious point from which to start. So I will kick off with my own journey, if only because while exploring systems I have learned that micro-level characteristics often have strong macro-level parallels.

I became CEO of the UK’s Lankelly Chase Foundation in 2011. I surprised myself by applying, because I’d come to view foundations as quite conservative and often clumsy with power. However, I sensed that things could be about to change.

Over the previous decade, I’d worked in government and the not-for-profit sector. Increasingly I’d felt uneasy about the widespread assumption that social outcomes could be specified, commissioned and delivered. My experience suggested that the effectiveness of evidence-based interventions depended on local context, that the business models of not-for-profit organisations contributed to siloed behaviour, and that programmes lacked the flexibility to respond to change. It was a method that led to frontline staff feeling boxed-in and to already-marginalised citizens experiencing further stigma and exclusion.

By 2011 fiscal austerity – cuts to government welfare and service provision budgets – was beginning to take hold in the UK. It seemed certain that the shortcomings of existing systems would start to be cruelly exposed once they were put under ever greater stress. This was both a real risk to the lives of our most disadvantaged citizens, and a painful opportunity. Without the money to soften the worst outcomes of the systems we’d created, we’d be forced to explore fundamental alternatives.

Looking back we can see that the financial crisis helped bring about a collective awakening both to the complexity, scale and profundity of the issues we now face, and to the extent to which these were outstripping the mechanistic approaches previously beloved of foundations.

I wanted to work in philanthropy because foundations possessed exactly the right qualities to do the work that now needed to be done: independence, flexibility and longevity. I argued that if foundations wanted to play a historic role in turning a crisis into an opportunity, they would need to stop rescuing current systems, and by extension those who were their victims.

It quickly became apparent that others were reaching similar conclusions. We noticed the term ‘system change’ showing up elsewhere, most notably among foundations in the US and Canada. A mantra was emerging of moving from symptoms and needs to causes and drivers. Looking back we can see that the financial crisis helped bring about a collective awakening both to the complexity, scale and profundity of the issues we now face, and to the extent to which these were outstripping the mechanistic approaches previously beloved of foundations.

This awakening had its origins in the field of climate change, and was now spreading to other fields such as inequality, discrimination and political polarisation. All of these phenomena started to look highly interconnected in ways that weren’t so obvious before, casting our need to categorise and control into quite a different light, surfacing new questions about power and oppression.

Unlike other actors, foundations can make independent choices about the parts of a system they consider relevant to their purpose, and by investing in those parts they still do not become wedded to them.

My own impulse to dig deeper into systems long predated my awareness that there was a discipline called ‘systems thinking’. It was only when I realised I didn’t have the competence to deal with the issues emerging through my work that I googled ‘systems’. For quite a while, therefore, Lankelly Chase was talking and thinking about systems without any formal systems thinking expertise.

Many organisations feel no need to move beyond this point. There are plenty of ways of trying to shift a system that do not draw on systems thinking explicitly. However, the idea that there are systems to be shifted, and that the problems we seek to solve are created by interdependent factors and dynamics, is thanks to the systems-thinking discipline, whether or not this is consciously acknowledged.

As we dug further, we discovered that ideas and paradoxes we could barely articulate had been given masterly shape decades earlier by system thinkers such as Russ Ackoff, Donella Meadows, Peter Senge and Margaret Wheatley. And again, we were not alone. Looking around, we saw a fresh wave of actors from different fields discovering systems thinking as if it were newly minted for 21st century challenges.

Compatible, yes, but productive?
While the fortunes of systems thinking have ebbed and flowed over the decades, it has mainly occurred on the margins of organisations. This time something different seems to be happening, at least in terms of philanthropy. A number of major foundations are embracing systems approaches as a core methodology. How should we understand this?

Foundations do seem particularly well-placed to undertake systems work. Their freedom allows them to make choices about entering and exiting systems, and about the role they wish to adopt in relation to them. Unlike other actors, foundations can make independent choices about the parts of a system they consider relevant to their purpose, and by investing in those parts they still do not become wedded to them. They can also adopt many different modes of working in a system, such as fostering innovation and disruption, building consensus, amplifying unheard voices, creating institutions, growing grassroots, investing capital, reframing arguments. No one else enjoys this combination of manoeuvrability and meaningful resources.

We have sought to model the behaviours of healthier systems, including delegated decision-making, mutual accountability, trust-based relationships, promoting equality of voice. By aiming for congruence between means and ends, we and our peers contend that effective practice and ethical practice become the same.

Philanthropy and systems approaches therefore seem an obvious coupling. Like any relationship though, it is not clear what kind of couple they will make. Can a philanthropic foundation, with all its power and privilege, become a good practitioner of a marginal discipline like systems thinking? Can systems thinking survive the embrace of foundations? Will foundations allow themselves to be changed by systems thinking?

The future of this relationship hinges on a single question: what do foundations understand by a systems approach? Behind the language of ‘systems change’ are very different ideas about ‘systems’ both between foundations and within them. Some of these are exemplified in this special feature: GAPA has brought together multiple stakeholders to change the policing system in one city; EDGE Funders  sees one overriding system determining all the problems we seek to address, and which we can either choose to perpetuate or disrupt; and Hivos has changed its own system of philanthropy in order to avoid contributing to neo-colonial power structures.

I detect at least four broad approaches or attitudes to systems in foundations’ work, all of which have been at play in Lankelly Chase’s work at different points:

1.The system as a unit of intervention
Many foundations are trying to take in a broader canvas, recognising that both problems and solutions are generated by the interplay of multiple variables. They hope to find leverage points among these variables, so that their investment can unlock so-called system-level change. Some of their strategies include: working for policy changes, scaling disruptive innovations, supporting advocacy for people’s rights, and improving the evidence base used by system actors. These approaches seem to work best when there is common agreement on an identifiable system, such as the criminal justice system, which can be mapped and acted on.

2.Messy contested systems
Some foundations find they are drawn deeper into complexity. They unearth conflicting perspectives on the nature of the problem, especially when there is a power inequality between those defining it and those experiencing it. As greater interconnection emerges, the frame put around the canvas is shown to be arbitrary and the hope of identifying leverage points begins to look reductive. One person’s solution turns out to be another’s problem. Unable to predict how change might occur, foundations shift towards more exploratory and inquiring approaches. Rather than funding programmes or institutions, they seek to influence the conditions of change, focusing on collaborations, place-based approaches, collective impact, amplifying lesser heard voices, building skills and capacities, and reframing the narratives people hold. 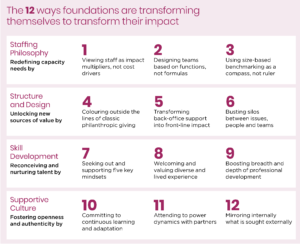 3.Seeing yourself in the system
As appreciation of interconnection deepens, the way foundations earn money, how they make decisions, the people they choose to include in (and exclude from) their work, how they specify success, all come into play as parts of the system that need to change. These foundations realise that they aren’t just looking at a canvas, they are part of it. At Lankelly Chase, we now view our position as fundamentally paradoxical, given that we are seeking to tackle inequality by holding accumulated wealth. We have sought to model the behaviours of healthier systems, including delegated decision-making, mutual accountability, trust-based relationships, promoting equality of voice. By aiming for congruence between means and ends, we and our peers contend that effective practice and ethical practice become the same.

4.Beyond systems
There comes a point when the idea of systems itself can feel reductive. Different values are invoked, those of kindness and solidarity. The basis on which humans relate to each other becomes the core concern. Inspiration is sought in other histories and forms of spiritualty, as suppressed narratives are surfaced. The frame of philanthropy itself is no longer a given, with mutuality and even reparation becoming the basis of an alternative paradigm. 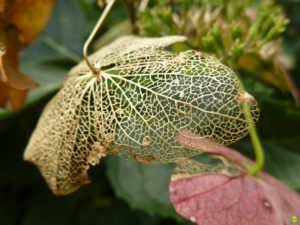 In setting these out sequentially, I don’t intend to suggest a hierarchy. My sense is that a foundation’s effectiveness must depend on how consciously and meaningfully it aligns its purpose with its attitude to systems. Foundations aiming for radical paradigm shifts can still find themselves tackling ‘The System’ with spanners and wrenches. As we have found at Lankelly Chase, it is very easy to slide between these four attitudes, or to hold more than one at the same time. The discipline of any systems approach is in part therefore the ability to come clearly from one attitude to systems while acknowledging that you hold others.

Foundations can be viewed as both ‘of’ and ‘outside’ any system. This is a tension that isn’t resolvable, but if handled with sufficient self-awareness could make foundations powerful systems practitioners.

Ultimately, there are significant implications here for the role and shape of foundations that are only just starting to come fully into view. There is a particular question of how a governing body assures itself of impact while holding the space for uncertainty, difference and ethical ambiguity. My prediction is that the more foundations pursue systems-level change, the more these implications will need to be understood and addressed. I hope this special feature will make a helpful contribution to that task.

An excellent overview of how systems thinking can and should be a part of the understanding of how the public sector works, and how it can redesign itself to be what its purpose actually is. Maybe we can finally move away from successive governments attempts at tweaking top down well meaning initiatives, and focus on the whole. The way that systemsm thinking is introduced in this article, using plain language, is welcome.