In the wake of the current financial crisis, all institutions, from banks to non-profits, are re-evaluating their risk management systems, resulting in a much reduced appetite for risk. This has made it increasingly difficult for private businesses and entrepreneurs to finance higher-risk investments exactly at the time when maverick capital is needed to reverse the global recession. Philanthropic capital has always been potentially the highest-risk-taking capital in a society, but it has not always fulfilled this role. Now, more than ever, it should do so.

Through demonstrating the viability of early-stage ventures that can create systemic change but are still too risky for commercial markets, philanthropic capital can lift the clouds of doubt preventing new concepts from securing the necessary funding to achieve scale.

In theory, philanthropic capital and commercial capital lie on the same funding continuum. However, there is a risk threshold above which the market simply cannot invest because it is believed that the risk, real or perceived, wipes out any potential financial gains. This presents an abundant opportunity for philanthropic investors that do not face the same financial return hurdles. Through investing time and money in early-stage social ventures, philanthropic capital can significantly reduce their risk, enabling them to gain access to the commercial markets in later funding rounds.

In addition, the resulting demonstration effect lowers the perceived risk for similar projects. Once the proof of concept exists, commercial investors can begin providing seed capital for replications of these ventures, rather than waiting for philanthropists to finance the first round.

An excellent example of this theory lies in the development of the global microfinance industry. When the commercial microfinance movement started during the late 1980s, no financial institution was willing to bet that the poor were capable of repaying small loans with accrued interest. Hence, most microfinance banks were started with philanthropic backing from institutions that were able to risk the financial capital in order to achieve potentially huge social returns. Once the myths surrounding the poor’s repayment rates were dispelled and microcredit was proven as a viable business model, commercial investors began to provide seed capital for new microfinance institutions across the globe. In other words, philanthropic capital played an important role in demonstrating that microfinance can deliver above-market returns at acceptable levels of risk for the commercial markets.

Such was the case of Compartamos. Its first round of financing in 1999 was funded mostly by philanthropic capital. Years later and especially after the Compartamos IPO (initial public offering) in 2007, when commercial capital realized that microfinance in Mexico was a viable and promising business, many commercial investors entered the space. Today, there are many early-stage microfinance institutions in Mexico that are being funded by commercial capital, something that was simply impossible only a decade ago.

At IGNIA, a Mexican venture capital firm investing in high-growth social enterprises, we believe that the same factors that allowed for the creation of successful commercial microfinance institutions are replicated in other areas of high social impact, such as healthcare, housing, education and basic services. In the course of our work, we have evaluated several other for-profit social businesses that received initial grant funding to demonstrate their proof of concept. 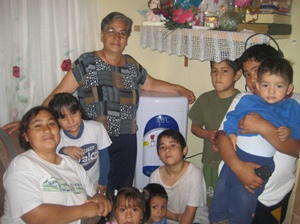 Radian, a telecommunications start-up that developed a low-cost technology to provide affordable internet, phone and cable, was initially funded through grants from the Mexican National Council of Science and Technology. The Water Initiative (TWI), which designs point-of-use water purification devices that are marketed and distributed through local entrepreneurs, received a grant from the Inter-American Development Bank’s Multilateral Investment Fund.

So far, philanthropy has provided Radian and TWI with grants only for their prototypes and pilots, leading to some success in commercial fundraising. However, there are more opportunities for philanthropy to help – for example, by guaranteeing loans or lease agreements with commercial institutions in order to bring down the interest rates at which they will finance their equipment roll-out and buy computers and water purifiers for clients at the base of the socioeconomic pyramid. Currently, Radian and TWI are looking to raise subsequent rounds of financing from both social and commercial investors. A philanthropic loan guarantee would make these businesses more attractive to commercial investors.

The barriers to risk-taking

Although it is clear that philanthropic and commercial capital are part of the same funding curve, these two sectors have seen little collaboration. The current pipeline of deals flowing from foundations to the commercial markets is still small because several factors thwart risk-taking at philanthropic institutions:

First, the risks and rewards are unfairly allocated between philanthropic and commercial capital. Philanthropy bears the highest risk with no prospect of reward, given that no grant capital is returned. In contrast, financial investors incur much lower risk but capture all of the upside. Second, the culture of most foundations makes it easier to reject rather than champion new opportunities. Often, executive committees or donors actively avoid controversy or risk. Third, the critical spotlight of the media, which interprets every failure as a demonstration of weakness rather than as a stepping stone to success, feeds risk aversion as the modus operandi.

There is also a lack of awareness among commercial investors of viable businesses that have been funded by philanthropic capital. With today’s attention span from the investor community, you a need big ‘bang’ like the Compartamos IPO to attract attention. But there are many success stories like the ones produced by E+Co (Energy Through Enterprise) in energy delivery in Central America that have not received the deserved attention and therefore commercial capital has not been attracted.

We now have an opportunity to fix this situation by rebalancing the risks and returns accruing to each type of capital. Although philanthropic capital will continue to take on more risk than commercial investors, it can begin to capture the rewards of successful ventures by structuring grants in exchange for equity. If the project fails, there is no obligation to pay back the grant. But if the project is successful, the resulting share of its profit can help foundations finance new, experimental, system-changing ventures.

Profit-sharing will require the development of new funding vehicles at philanthropic organizations. For example, ACCION International and Acumen Fund have set up funds that allow them to recover capital and capture the upside from successful ventures and reinvest it in other promising but risky initiatives that cannot yet access the markets. More importantly, profit-sharing will require a change in philanthropy’s attitude to risk. A few notable organizations like the Gates Foundation have recognized failure as a prerequisite to innovation and social progress. We need more of this kind of thinking.

To conclude, today’s financial crisis has highlighted the opportunity for collaboration between philanthropy and business. With scarce capital and tighter risk controls in the private sector, philanthropic capital must bear the early-stage risks of demonstrating the viability of new business models that produce positive systemic change. Given philanthropy’s ability to take on above-market risk for lower probabilities of success, foundations and governments can partner with commercial capital to solve some of the most pressing social challenges.

Álvaro Rodríguez Arregui is co-founder and managing partner of IGNIA Fund, the first social venture fund in the Americas investing in businesses that serve the base of the pyramid. Email ara@ignia.com.mx

The Buckminster Fuller Institute (BFI) has created an Idea Index, a database of entries submitted to the Buckminster Fuller Challenge, an annual $100,000 prize to support the development and implementation of a strategy that has significant potential to solve humanity’s most pressing problems. The Idea Index will ‘serve as a tool to educate, network, and help solve problems’, says BFI’s website. The Idea Index is a fully searchable database of socially responsible initiatives, in all stages of development, in need of further funding and support. It also allows site visitors to contact the project leader of an entry they find interesting, leave a comment (requires site registration) or offer a suggestion to improve a project, or contact BFI to find out more about a project. The Index has 286 entries.