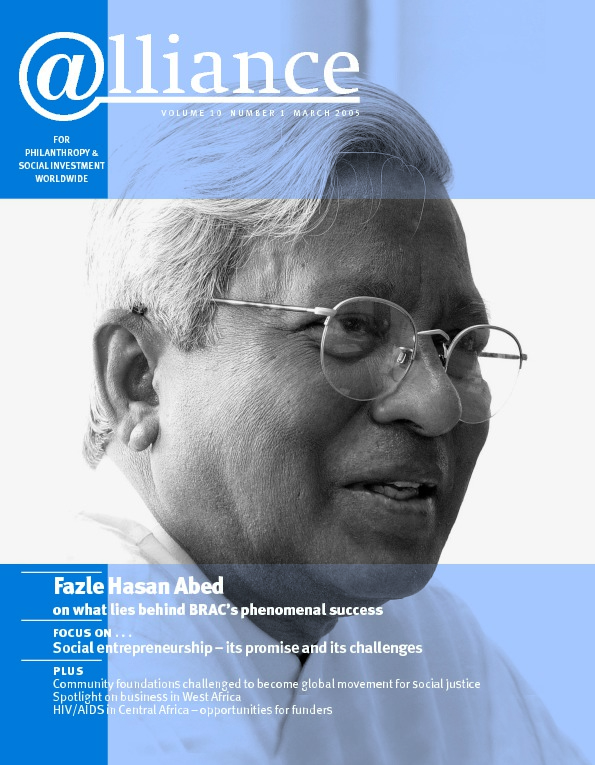 You could sum up Gram Vikas’s achievement by saying that they had an innovative idea and the ability to put it to work in the face of considerable odds. When founded in the 1970s in Orissa, India, Gram Vikas (meaning ‘village development’) was among the earliest non-missionary, non-Gandhian organizations to work formally and sustainably towards improving quality of life in poor and marginalized communities.

At the time, there were no established donors. The government was not involved, having yet to recognize such entities and establish ways to include them in development processes. Without sanction from the ‘establishment’, Gram Vikas’s greatest challenge, and one that persists today, was to maintain a balance between ‘activism’ and ‘constructive development’.

Sceptics have often branded Gram Vikas’s workers as communists or naxalites,[1] complicating efforts to quell bureaucratic suspicion of social purpose organizations and making it more difficult for Gram Vikas to build trust. The challenges continue, as the communities Gram Vikas has worked to mobilize question the role and efficacy of the government, standing up to politicians and questioning the exploitative middlemen and contractors who often work hand in hand with market and government agencies.

The core aim of Gram Vikas is to harness the physical, natural, social and human capital in every village through convergent community action. Their work is rooted in the belief that (a) the poor can and will pay for services that they believe will benefit them and (b) rural infrastructure and services are entitlements, not subsidies, just as in urban areas.

To achieve this, Gram Vikas aims to augment local resources, while simultaneously leveraging assistance from government agencies, private institutions and donors for ‘seed capital’ to trigger development processes in villages. Over the years, they have made a conscious effort to integrate successful experiments and demonstrations with compatible mainstream developments by creating a sustainable resource profile, a mix of loans and grants. Gram Vikas aims to integrate government initiatives where possible, to demonstrate the potential of public funds and resources.

From our experience thus far, we realize that we must work simultaneously at both the tangible and intangible levels. While the tangibles, such as community infrastructure developments, are important for improving the general quality of life, to have full impact they must be accompanied by sound processes of human and institutional development, the intangibles.

The core principle underlying Gram Vikas’s work is the notion that a village community should engage fully to determine its course of development. Village general bodies are encouraged to strengthen democratic processes through a process of learning by doing, while simultaneously building the community funds that increase self-reliance and enhancing their bargaining capacities by allowing engagement with state and market agencies.

In most villages, the first experience with collective action comes when individual families build their own toilets and bathing rooms, establishing community water supply systems to deliver piped water to all in the village. While there are tangible gains in this, the real benefit is less obvious – as the experience of working together energizes communities to tackling other issues of common concern.

Gram Vikas believes that credibility is fostered in several ways. Primarily, it is generated by the ‘agents of change’ themselves, the workers who identify with the people they are working with and the change they are attempting to trigger. But these agents must remember that control ultimately rests with the community, making its own choices and arriving at internal consensus.

Credibility also depends on impact. One of the reasons for the success of Gram Vikas’s community-based work is that its results are clear and visible, and non-exclusive. All families have the same basic level of facilities. The poorest woman is on equal footing with the richest; her voice is heard and she can influence decisions.

The critical function of any development initiative is that it delivers the technology or development solution best suited to the situation, not simply the cheapest available option. Initiatives should be cost-effective, not just low-cost. Affordability is obviously an added advantage, but it should not be the precondition for adoption. It is remarkable how a few simple interventions can produce life-changing improvements for the rural poor, inspiring and empowering communities for the future.

1 A term used to refer to groups waging a violent struggle on behalf of landless labourers and tribal people against landlords and others.

Joe Madiath and Jayapadma RV work with Gram Vikas, an NGO in Orissa, India. They can be contacted at info@gramvikas.org