‘The project is politically a bit dangerous … It was a risk for JRCT too, because it was open-ended and we were going into uncharted territory.’

Established in November 2010, the High Pay Commission is an independent inquiry into high pay and boardroom pay across the public and private sectors in the UK. It was established by Compass, an influential ideas and action-based pressure group, with the support of the Joseph Rowntree Charitable Trust (JRCT). The Commission’s interim report was published in May 2011 and its final report in November. Why was the Commission established, what will its final report say, and what has it been like having a philanthropic funder, Caroline Hartnell asked Commission chair Deborah Hargreaves.

Why was the High Pay Commission established, and how is it going?

Top pay is something that’s been talked about and written about in the press for some time. There was a growing public disaffection that grew out of the financial crisis, and the squeeze on middle incomes has made running the Commission this year very topical. There’s a sense of ‘them and us’, that the highly paid elite has not suffered in the same way as the rest of the population.

We’ve been going for a year, and our work has been picked up by two of the political parties. Ed Miliband said in his speech at the Labour Party conference that he is very concerned about top pay; Vince Cable also mentioned in his speech at the Liberal Democrat conference a consultation paper looking at runaway pay at the top. We’ve been briefing both of them. We are talking to the Conservatives as well, though it’s not typical policy territory for them. So from a political take-up point of view, we couldn’t have hoped for more success in a year. We’ve had a lot of media attention as well. 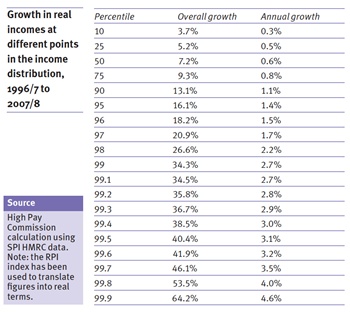 And what does the final report say?

The main recommendations are for a voted-for worker representative on the pay committee of each company; pay simplification, as the complexity surrounding pay has made it difficult for shareholders to understand; and getting back to a basic salary for top executives plus one performance award of shares, which have to be held for the long term. We’re also suggesting that companies should issue a fair pay report each year, and we’re looking at different ways in which companies can report on pay. We hope to retain political contacts and carry on campaigning on some of those issues so that some of them can become hard policy.

Does the report include findings on the effects of high pay and increasing levels of inequality?

Yes. There have been a lot of studies showing that the more unequal a society is, the more it suffers from a whole range of social ills, from crime to higher rates of mortality. The corporate elite doesn’t really understand the concerns of its wider workforce, and because they are able to buy a whole range of private services, they don’t have to engage with the public sector. That creates a very deep gulf between the top of society and the rest, and it builds a distrust of businesses. That’s not a good way for society to be structured. I think business plays an important role in society, and we need to be able to understand and hold it to account. Business leaders need a greater understanding of their responsibilities towards society.

What has it been like having a philanthropic funder?

The project is politically a bit dangerous – politicians aren’t really sure which way it will go and which way the public will go, so they would have been wary of funding something like this. It was a risk for JRCT too, because it was open-ended and we were going into uncharted territory.

From a philanthropic point of view, JRCT is looking at the equality angle – they’ve done a lot on low pay and now they’re working at the other end of the spectrum. So for them it was filling in not just a gap in public policy terms but also a gap in their own interest. We were aware of their interest in equality and social justice, so we kept that in mind. But we would have had an equality focus anyway because that is part of what high pay is about. So the fit was very good.

My background is in journalism so I have no experience of working like this, but from my point of view it’s been fantastic. They’ve been extremely benign funders. Obviously we’ve kept in touch with them about what we’re doing, our conclusions, and where we’re going with it, but they’ve put no pressure on us at all. Their support is a mark of great confidence in the project.

Why JRCT is supporting the High Pay Commission

It is not often that the Joseph Rowntree Charitable Trust (JRCT) is associated with a bestseller. In 2008 though, Richard Wilkinson and Kate Pickett approached us to ask if we would help them raise the profile of their research findings into inequality and assist with the dissemination process. Their book The Spirit Level was published by Penguin in 2009 and has since sold around 200,000 copies and been translated into 20 languages.

The important message of The Spirit Level is that in western developed countries, a smaller gap between rich and poor means a happier, healthier and more successful population. So for the UK, Wilkinson and Pickett’s research suggests that if we were able to halve income inequality:

And it’s not just poor people who would do better. The evidence suggests that in more equal societies everyone benefits, although it’s true that the poorest would gain the most.

Poverty and low pay have been issues on which JRCT has worked for most of its 107-year existence. This work is still desperately needed, but what has become evident in recent years is that low pay is not the only issue: high pay is a growing cause of inequality. The exponential rise in top pay for senior company executives and directors is widening the gap between rich and poor and hence adding to the burden of social problems.

High pay might lead to more philanthropy, but what is it doing for society as a whole?

The JRCT trustees felt challenged by this issue, but when trying to explore it further it became evident that there is almost no information available on high pay. The need for an independent enquiry into high pay and boardroom pay across the public and private sectors in the UK was clearly evident.

Working with Compass, the High Pay Commission was established in November 2010. It is a totally independent body with the Commissioners drawn from business, trade unions and civil society.

‘If leaders of big companies seem to occupy a different galaxy from the rest of the community, they risk being treated as aliens,’ said Richard Lambert in 2010 when head of the UK Confederation of British Industry. No doubt all of those protesting around the world about the injustices of our current economic system would agree.

So what can we do about it? We eagerly await the findings of the High Pay Commission when it reports in November 2011 with detailed policy proposals.

For more information
To download the interim report and the final report, go to http://www.highpaycommission.co.uk