No resolution to question of PCNC’s accreditation status

In November 2009, a group of 16 donors from around the world travelled to China for a module of The Philanthropy Workshop, the Institute for Philanthropy’s international donor education programme. Following the week-long module, one of the participants – Hugh Davidson, from the UK – shared his thoughts with the Institute on the funding challenges and opportunities that he saw in China.

How did China help you to reflect upon your funding strategy?

I think it helped me to understand the importance of involving government when you’ve got a one-party style. Some people said that in many ways China and Vietnam are capitalist societies with one party rather than a number of parties. One big lesson – which applies to Vietnam as well, where we’re funding a project – is the importance of trying to find areas where you’ve got a consensus with government, rather than focusing on areas of conflict. I would say that, on 70 per cent of discussion points, one would agree with them: helping poor people, greater equality, health and education. Donors should focus on those things, get involved with the government on a local, provincial and national level very, very early on, and build good networks. Unless you’ve got networking and support from government, you’re unlikely to make much of an impact.

What would your concerns be about funding in China?

When I went there, my big question was the sustainability of the regime. Looking at the next 30 years, if it carries on growing at the present rate, probably in 25 years’ time it will have overtaken the American economy. The big question for me was ‘will it blow up or not? Is it a model that can continue long-term?’ One of the people we talked to told us, on average, there are about 100,000 riots every year in China, mainly in the country areas.

My conclusion is there’s a 70 to 80 per cent probability that they are sustainable, because they are changing rapidly, they look like they’re eager to get growth, and as long as they achieve growth and improve living standards, they will probably be able to achieve the broad harmony that they keep talking about. Whenever you talk to government people, the first thing you need to talk about is ‘is this going to improve harmony?’ If it doesn’t improve harmony, it’s off strategy.

Of the four topics that you examined during the visit – advocacy, migration, microfinance and the environment – where did you see the greatest opportunities and challenges for grantmaking?

I think the biggest opportunity in China is internal migration. Nobody quite knows how many migrants there are – the estimate is that there could be 150-250 million people – and they’re mainly going to the east from the rural areas in the west. They are very much an engine of the economic success of China, but they are treated as second-class citizens. They’re better off than if they’d stayed in the rural areas, but they get discriminated against in terms of job opportunities and so on in the urban areas where they are. But we saw a number of very interesting programmes that look like they’ve got a good chance of dramatic progress on that front. So I say migration, because there are probably more migrants in China than anywhere else.

I think that the big challenges in China are the health system – because public health is very, very underdeveloped; things like pensions – there really isn’t much of a state system; and reasonable safety nets that western countries take for granted. They are doing a very effective job of building the economy, but there are still 200 million people in China earning less than a dollar a day. So I think that the big challenge is continuing growth, and seeing that economic success is shared more equally, particularly with people in the country, many of whom still suffer great hardship and low incomes.

What comparisons would you draw between the UK and Chinese social sectors?

There’s obviously a great deal more freedom in a place like the UK because we’ve a multi-party system with universal suffrage. In China, if you are critical of the government, especially on issues they think are really important, and undermine harmony, then you will have a pretty hard time; whereas in the UK there’s a long tradition of freedom of speech and so on.

One of the advantages of the one-party system, though – and I noticed this in both China and Vietnam – is that if you can get well networked with the people there, and you can come up with really good, clever projects that are well evaluated, and if you can convince them, they can move a lot faster than the UK government could. We saw one project where an NGO that we’d talked to had done a small pilot test on drug injections for hepatitis B, and they were able to use this as a demonstration project; they got the provincial government to scale it up, and the provincial government then went along to the national government, which started to apply it on a national scale. And all this happened within 18 months. You just can’t imagine that speed of movement in a western country.

What comparisons would you draw between funding in China and funding in Vietnam?

They’re both one-party states, but I think the Vietnamese are more comfortable in their own skin, and they’ve a rather more flexible one-party system. The Chinese do tend to be rather more rigid and bureaucratic. On the other hand, China’s income level per capita is still quite a lot higher than Vietnam’s; Vietnam’s economy is probably some years behind China’s. I think they’ve both got improving education systems – the education system in China is more effective than India’s, and literacy is much higher in China than India – and I think they’ve both got a lot of work to do in health and in helping people who are very poor at the bottom of the pile. 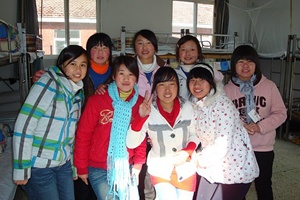 What was the most impressive NGO you saw in China, and why?

The one I liked best was the learning centre for rural women (pictured). The reason I liked it so much was that it has a philosophy of empowerment. So step number one is building empowerment and self-reliance. Having done that, they teach the women skills in hairdressing, computers and sewing and make them into beauticians. It is a very efficient organization; the typical woman is there for three months and the cost is only £240 per head; teachers work extremely hard, six days a week, 11 months a year; and they seem to be highly effective in building confidence and skills for these rural women, and laying a foundation for their opportunities in the long term. So from the point of view of each person there, it did seem to be very sustainable.

What did you take from the learning strategy session?

I think I got a reasonably good idea, as did others, as to what the key factors for success were for an NGO in China; and I think my summary theme would be: ‘Change is feasible; it requires hard work, but it can be quick and low-cost.’ Nearly all the NGOs we saw had an annual revenue of between $100,000 and $1 million, and many of them were having a very big impact. So compared to countries in the West, for a given amount of money, you can get a great deal more impact in China.

I think another thing I learned in China was that, wherever possible, you’ve got to work with government. That doesn’t mean to say you compromise your beliefs or principles, because there’s a lot of common ground with the Chinese government, and you’ve got to link any activity to their objective, which is stability and harmony.

For more information
To download IfP’s related reports on China’s social sector, Exploring China and One Generation Plants the Trees, Another Gets the Shade, go to
http://www.instituteforphilanthropy.org/content/Papers-Articles