Philanthropy out of the family office

Actor Jet Li is one of the world’s most famous martial arts experts. He was born in Beijing, the old Beijing, with dusty hutongs and hardly any cars on the streets, in 1963, when Mao was still in power. He says he knows what poverty is, first hand. As a child he quickly excelled in martial arts; aged 11, he took part in a performance for Richard Nixon and Henry Kissinger on the White House lawn. He has featured in over 38 films, starting his film career in Hong Kong before moving to Hollywood. One of his most famous films is Hero, a story about a medieval Chinese warrior. Five years ago, as he explained to Olga Alexeeva, he and his family nearly fell victim to the tsunami. Thereafter, he decided to take a break from his film career and devote his energy and his passion to philanthropy. So, the Jet Li One Foundation was born.

I first met Jet Li over a year ago at the UBS Philanthropy Forum in Singapore where he spoke with passion about the One Foundation, his philanthropy, and his vision for China. We also talked about how Charities Aid Foundation and the Jet Li One Foundation might work together.

We stayed in touch and I was invited to speak at the first One Foundation Philanthropy Forum in Beijing in November 2008. It was a major event, with representatives of the Chinese business community – like Jack Ma, who created the ‘Ali Baba’ online trading site for small businesses – and of the Chinese NGO sector. I remember my surprise that such a star as Jet Li, revered in China and the whole of Asia, did not take either a populist or an establishment line, but focused on China’s emerging charities and NGOs that were marginalized and fragile, operating in a very unfriendly legal environment, supporting them with annual grant awards and other help. 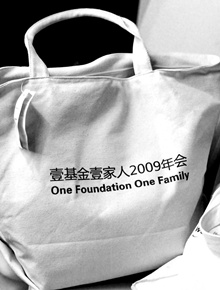 The One Foundation has come a long way since that first forum. This November we met again at their annual meeting where – again unusually for China – the foundation reported publicly on what it has achieved. Jet said that while his dream is to see every Chinese contribute one yuan a month for charity, so far only around 0.1 per cent have done so. I made a rough calculation: 1.4 billion people, 1.4 million donors gained in a year … not bad at all!

The beginnings of his philanthropy

Until 2004, Jet Li thought only of his movie career and very little, if at all, about philanthropy. Everything changed the day when he and his family, on holiday in South Asia, were caught up in the 2004 tsunami and nearly died. Jet told me how they struggled up to their chins in wild water and how he saw his daughter being carried away by the flood. She was saved by others but the help they got that day and the experience they lived through left its mark on him.

‘The experience of surviving the chaos and witnessing the devastation caused by this natural disaster has changed me forever,’ he says. ‘During the recovery period in the Maldives, I was deeply moved to see that everyone who was able to help willingly pitched in. Never once did anyone ask “Where are you from?” or “What nationality are you?” I wondered: was it possible to keep that spirit alive and transcend traditional boundaries to help humanity at large?’

So he decided to take a break from his movie career and to concentrate on building his own foundation. Jet explains: ‘The concept behind One Foundation is simple: 1 person + 1 dollar (or whatever currency) + 1 month (each month) = 1 (big) family. Translation: each person who can, donates one dollar per month. Everyone is connected as one world. The generosity you show to others ultimately comes back to you.’

Soon the One Foundation started operating in China, in partnership with the Red Cross of China, and later it was established in Singapore. It focuses on two key areas: it aspires to create a platform to promote philanthropy in China and beyond, and it provides humanitarian support to people and charities who help people in need. After last year’s Sichuan earthquake, the One Foundation was instrumental in bringing funds, materials and volunteers to help the victims. Last year and this, the foundation also supported what they call ‘demonstration projects’ – projects by creative local Chinese NGOs determined to improve lives in their communities.

Jet Li’s dream is to see the world as one family helping each other: ‘… 6.5 billion people on Earth, if even 10 per cent of them contribute, the world will be changed. It is not enough just to have politicians or enterprises, we need to change our habits, to save the planet, to save energy. Don’t disregard the word “One”. I say to the Chinese that using reusable chopsticks instead of disposable ones can save a lot of resources. One person’s resources are limited, one family’s power is endless.’

His concept of responsibility

He elaborated on this idea in an article published on his personal website outlining his understanding of responsibility in philanthropy: ‘The most popular response to a disaster is a business/economic model, or a fashionable model. Mainstream media and newspapers report, people express their emotion and love very intensely but for a short time … In two months, people are no longer talking about the disaster. My model is different – it is a kind of “public charity”. My ideal foundation is a fundamental charity facility much like the water and electricity utilities to a city. It can provide relief from a disaster for two or three years. This “public charity” is not driven by the influence of trends, but is driven by a custom of giving.’

He goes on: ‘Assume that we have 500 million cell phone users in China. If every one of these gives away 1 yuan per month, we will have 6 billion a year. If each Chinese person gives away 1 yuan a month, we will have 15 billion a year. One yuan is not an economic liability to anyone, but it reflects the liability of a citizen to society. We don’t need money from big corporations. When I visited Microsoft, they were very relieved when I told them, “we don’t need your money.” But then I asked them to give away 1 yuan from each employee’s monthly salary, or 1 per cent of the profit of selling one product.’

During research, he says, they found four problems: there are no NGOs with high credibility in China nor do most NGOs have a clear, long-term vision; there is no transparent system for giving, and it is just ‘too much hassle’ for a Chinese to donate. ‘Every step in our operation is designed to address these problems.’

It is still a struggle, with the lack of people with experience of running NGOs and a considerable amount of regulation to deal with. But Jet’s vision and passion help to overcome hurdles.

Why engage with other NGOs?

But why engage with other NGOs? Why not use Jet’s enormous popularity and implement their own projects? Why organize donor meetings and forums instead of just plain fundraising?

Jet responds: ‘My biggest lesson from the Sichuan earthquake rescue is that grassroots NGOs can help the government in its blind spots. Government relief is not always detail-oriented. Grassroots NGOs can’t be as big as a government effort, but they need to be flexible and independent. Grassroots should not be merged. Once merged, they are no different from governmental organizations.’

Philanthropy is growing exponentially in China. In 2002, according to various sources, RMB 2 billion was raised for charitable purposes. In 2006, four years later, the figure was RMB 10 billion and in 2008 it was RMB 30 billion. But Jet is not satisfied with these huge numbers. ‘It is only 0.075 per cent of our GDP! In the US, the percentage is 2.75.’

I watched Jet Li on the stage at the One Foundation annual meeting – passionate, inspiring, a true leader for those in China who want to see their country excel not only in business or space travel but in also achieving a high quality of life for all. I kept asking myself: will he get tired, how much can he achieve as one of very few, so far, in this huge country who raise not only funds but their voices in favour of philanthropy. And a question kept coming back, a question from someone who grew up in the Soviet Union – will he be allowed to continue?

Then I brushed my doubts aside and wished him well. And I also wished that these two Chinese characters for responsibility, ‘respect’ and ‘future’, might be understood and taken on board by philanthropists in other corners of the world.