Established in 2005 by the Van Vliet family, following the sale of their asset management company, the Adessium Foundation can be hailed as a newcomer to that all too select group: philanthropy infrastructure funders. Having found it difficult to find good advice when they were starting out, the family decided to look into setting up a resource for the philanthropy sector as a whole. The result is the Erasmus Centre for Strategic Philanthropy (ECSP), launched on 23 September. Caroline Hartnell talked to director Pieter Stemerding about the foundation’s involvement with the new centre and other projects.

I believe that one of the reasons the family funded the Erasmus Centre was that when they were setting up the Adessium Foundation they found it hard to get good advice and information. Is that right?

That’s right. When you’re an entrepreneur and you turn yourself into a philanthropist, you are entering a different world and it’s a world you don’t know. When the Adessium Foundation was founded, there were very few doors to knock on in order to get support in terms of how to set up the foundation, whom to approach, how to build a portfolio. There were different people in the Netherlands, in particular, who could help on a consultancy basis but there were few organizations or entities that could provide support on an independent basis. That’s what triggered the initial decision to go and talk to Erasmus University (the alma mater of the foundation’s founder) about these issues.

Philanthropy in essence is an economic allocation issue – an issue of how you best and most effectively allocate cash resources. Erasmus University, which has a strong focus on economics, was very much interested in these issues. They have worked on them before, but not to the extent that they are working on them now that they have a centre focusing on philanthropy. Before the ECSP, Erasmus had used the label of philanthropy to look at some impact issues, so when the Erasmus Centre was launched on 23 September they presented work, for example, on the impact of the Netherlands Heart Society.

It was quite a surprising decision for a new donor, indeed for any donor, to support something like the Erasmus Centre. Donors usually have a particular field they want to support, such as climate change or education, but to fund something that will benefit a whole field is a pretty sophisticated decision.

What the foundation tries to do is to be a real strategic player. At first we were just funding projects and programmes and trying to invest in partners, but later we realized that by investing in the effectiveness of the philanthropy sector at large, you can achieve an incredible impact. What we’re trying to do is not just to make sure that one organization can carry out specific activities, but to make the whole sector more effective and more efficient. That’s something that appeals to us, both the professional staff and the board of the foundation. It’s not been easy; we’ve gone through a lengthy process and many discussions, but we’ve done it. 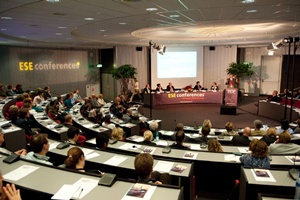 Is funding the Erasmus Centre a one-off, or do you intend to carry on funding in this area?

Although the Erasmus Centre has been formally established, a lot of work still needs to be done. We’re now identifying professors and PhD candidates who can work under the umbrella of ECSP, we’re building up networks, we’re building up knowledge and experience, and we’re identifying suitable research themes. When I say ‘we’, it’s actually the ECSP doing all this with support from the Adessium Foundation, among others. We’re very supportive of this work and we’re very involved but not at an operational level; we’re supporting it more strategically, rather than holding their hand.

In funding terms, our partnership with ESCP is a large one. We want to make it a success, so we will continue to invest time and money over the next few years in order to make sure that it is. We don’t exclude the possibility of funding other initiatives in the same area, but we’re not actively seeking it either.

Funding philanthropy infrastructure is quite rare – especially among European funders. Do you consciously feel you’re filling a gap? Does it feel a bit lonely?

Actually, there are other philanthropic initiatives in this area in Europe, including one other in the Netherlands led by Professor Theo Schuyt from VU, the Free University in Amsterdam, so no, it’s not lonely. We also see that there is strong interest from a lot of funders in what we’re trying to do with Erasmus University, and there’s a lot of interest from the philanthropy sector at large.

It’s true that at the moment we are the sole external funder of this Erasmus initiative. It is desirable that this changes over time.

How will the Erasmus Centre be run? You talk about investing time – are you on the board?

I am on the board, yes. ECSP is set up as a partnership between the Adessium Foundation and Erasmus University. Also on the board are George Yip, dean of the Rotterdam School of Management, and Philip Hans Franses from the economics faculty. The centre is led by Charles Erkelens, the executive director. A number of professors, PhD researchers and others will be appointed to work under the umbrella of the ECSP.

There is a strategic plan for three years. In quarterly board meetings we discuss the overall strategy and workplans.

What do you think about the issues raised by John Healy at the launch of the centre: about the danger of an academic centre becoming not as relevant to practitioners as it could be because it is governed by the needs of academics?

I acknowledge that danger. One of the reasons we actually initiated discussions with Erasmus University is that it’s a hands-on, pragmatic organization. One of the advantages of its research is that it is normally rooted in practice in the field, and I think that’s as it ought to be. There’s always the challenge of balancing academic interests versus the demands from the sector, which is not as much about the academic quality of research as about the practical usability of work being done under this umbrella.

So we are aware of this potential problem and I think there is a balance there. We’ve chosen to set this up as an academic institution and we understand what needs to be done to meet certain academic criteria. However, the ultimate objective is to meet the needs of the sector so we need to balance those two very carefully.

I understand the Erasmus Centre is going to be looking not just at philanthropy but at the non-profit sector and civil society more widely – is that right?

Well, I think there is a lot of confusion when we talk about definitions. If you ask ten people what philanthropy is about, you will get ten different answers. I don’t think there’s a very clear line between all the different entities, but in a way that doesn’t matter – we are very much looking at this as an effort to increase the impact of the sector at large. We’re not limiting our efforts to endowed foundations; the more organizations we can reach out to and work with, the better. In a way, distinguishing between the funding sources isn’t all that relevant – it’s ultimately about the impact of the sector at large and we therefore shouldn’t worry too much about where the money comes from.

We’re taking a rather broad view on this and we do target organizations funded by the general public, such as WWF and the Red Cross, but we also include endowed foundations like ours. What we’re really interested in is the aggregated impact of all those actors operating under the banner of the philanthropic sector.

Had you made other grants or investments before or was this the first?

No, we do have other grants, not just in the Netherlands but also internationally. We have a number of programmes we’re supporting in Borneo, for example, and also in Africa. Over the three years that I’ve been with Adessium, there’s been a kind of shift towards a more institutional programmatic approach.

We divide our work into three main programmes. The first is about promoting critical reflection and debate in society; our work with the Centre for Public Integrity in Washington fits in here. The second has a strong human rights component, and that’s where Human Rights Watch and Amnesty International fit in. Our work with Global Witness is something that we include in the third area we’re supporting, which is about nature and resources. In most of our programmes, we focus on integrity, transparency, accountability and preventing corruption.

In all your programmes, it sounds like you’re funding at quite a high level of organization. Do you fund smaller organizations too, or do you really want to affect the structure of whatever area you’re going in to?

We do fund smaller projects and more concrete activities as well, especially where we can address local issues. However, it is true that to a large extent our funding goes into these larger programmatic institutional partnerships, which in general try to tackle more fundamental issues and tend to yield results in the longer term.

Pieter Stemerding has been director of the Adessium Foundation for the last three years. Email info@adessium.org