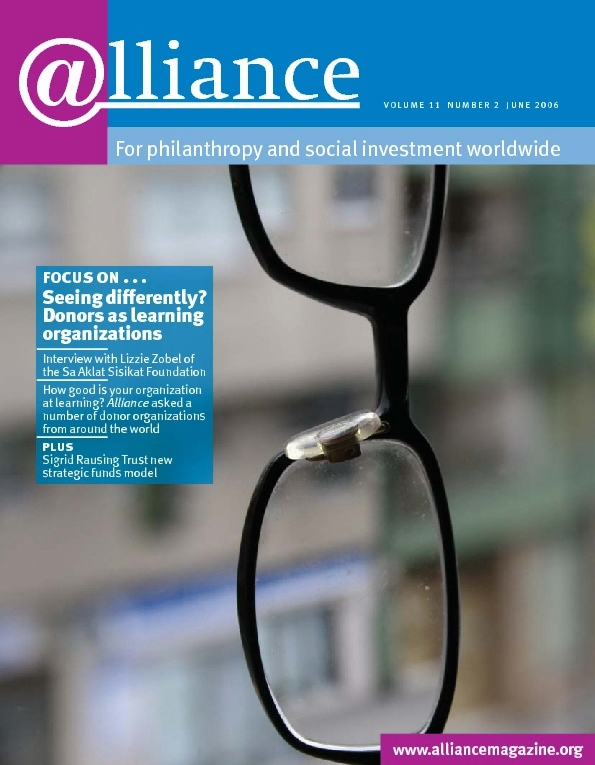 The CIVICUS World Assembly in June will feature workshops on, among other topics, the completion of the Civil Society Index (CSI) implementation phase 2003-2005 and CIVICUS’s Millennium Development Goals (MDGs) programme.

Between 2003 and 2006, organizations from over 50 countries undertook in-depth studies of the state of civil society in their country as part of CIVICUS’s CSI programme. As of June 2006, nearly all participating organizations will have completed the project. A workshop prior to the Assembly for these CSI partners will review their findings and chart a way forward for the project and two general workshops about the project will be held during the Assembly. The comprehensive country reports and preliminary results, meanwhile, are being posted on the CIVICUS website as they become available and a two-volume report on the programme will be published jointly by CIVICUS and Kumarian Press.

During 2005, CIVICUS’s MDGs programme focused on supporting the Global Call to Action against Poverty (GCAP). A mini-plenary at the Assembly will discuss the lessons learned from the 2005 campaign and how they should affect civil society’s strategies for economic justice in 2006 and beyond. Charles Abugre of Christian Aid will present a background paper arguing that, on their own, GCAP’s policy demands for better aid, debt cancellation and fairer trade will not be enough to provide adequate resources for the development of poor countries.

In addition to the mini-plenary, several workshops at the Assembly will focus on GCAP and the MDGs. Some of the issues that will be under discussion are the partnership for development (MDG 8) and responsible lending; enhancing civil society participation in the financing of the MDGs; renewing the Global Call to Action against Poverty for 2006-07; linking civil society to trade policy-making; and how far the MDGs will help to bring about economic justice.

For more information
about the World Assembly, visit http://www.civicusassembly.org