The privatization of governmental or quasi-governmental enterprises or assets offers a new avenue for resourcing community-based foundations in developing regions around the world.

This possibility has gained new visibility with the recent growth of Italy’s network of 88 foundations of banking origin as a byproduct of the privatization of the country’s former network of non-profit banks. But a new ‘Philanthropication thru Privatization’ (PtP) Project has made clear that this approach to building foundations is by no means limited to Italy. To date, 415 examples of foundations that have resulted from the privatization of state-owned or quasi-public assets have been identified. These include VolkswagenStiftung in Germany, New Zealand’s community trusts, Austria’s Erste Stiftung, the Netherlands’ Oranje Fonds, and the several dozen foundations created out of the privatization of non-profit hospitals and health insurance institutions in the US.

As the table below shows, extensive privatization is still under way in many developing countries. The PtP Project is identifying lessons from the previous cases that can help activists in these regions to initiate conversations about using some of the proceeds to build foundations in their own locales. The result could revolutionize the world’s foundation landscape. 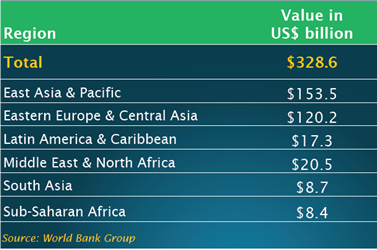 Proceeds from privatization in developing countries, by region, 2005-08