Looking at the EU, it is clear that there is a gulf in environmental awareness between northern Europe and many central and eastern European member states. In the five member states with the highest awareness of climate change, almost 76 per cent of the public feel they are well-informed, while in the five with the lowest awareness the corresponding figure is just 32.7 per cent. There are similar disparities in citizens’ involvement in environmental organizations, and in the extent to which the public hold ‘post-materialist’ values, where material possessions are seen as less important in life. 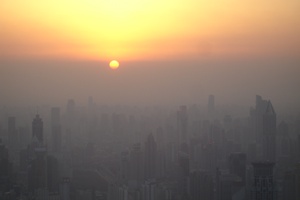 The research also shows that only a small share of grants are directed towards environmental initiatives in emerging economies such as China (pictured: sunset in Shanghai through the smog; taken from the top of the Jin Mao tower), which received just 12 of the 791 grants that were coded. Shouldn’t foundations be moving resources systematically eastwards to countries that are deciding whether to follow or leapfrog the West’s ‘dirty’ development path? These countries currently lack depth in their domestic philanthropic infrastructure, for understandable reasons, yet the decisions they are taking will affect everyone in the world.

Money isn’t everything when it comes to environmental policy success. For example, US environment groups had combined revenues in 2008 of $11.3 billion, yet the US ranks 61st in the world in environmental performance. More research is undoubtedly needed into the links between NGO resourcing and good policy outcomes. However, the data now being gathered suggests the need for a geographical re-orientation of grantmaking, informed by analysis of the changing geopolitics of the environment.