On 25 March, ten projects from eight European countries were awarded the ‘Living well with dementia in the community – European Foundations’ Initiative on Dementia (EFID) – Awards 2014’ at a ceremony in Brussels. The awards aim to highlight good practices in Europe and encourage their dissemination. All the winning projects help people with dementia and their families to lead fulfilling lives and play an active part in their local communities. 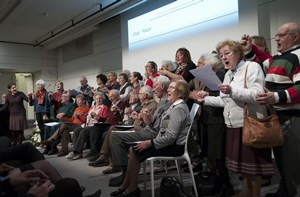 An example of an award-winning project is EDUCATE (Early Dementia Users Cooperative Aiming To Educate) from the UK, which was set up by people with early dementia who use their experiences to increase awareness of dementia. Their work includes giving presentations to associations, businesses and care institutions, and offering advice and training courses for care staff.

EFID is a collaboration between Atlantic Philanthropies, Fondation Médéric Alzheimer, Robert Bosch Stiftung, King Baudouin Foundation and the Joseph Rowntree Foundation, hosted by the NEF. The group is currently exploring other areas related to dementia and is open to new partners.