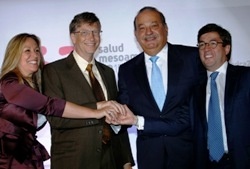 The Salud Mesoamérica 2015 (Health MesoAmerica 2015) initiative, whose aim is to combat poverty and to reduce infant and maternal mortality in Mexico and Central America, was launched in June. The initiative has attracted an initial investment of USD150 million from the Bill and Melinda Gates Foundation, the Carlos Slim Foundation and the Government of Spain.

Resources are to be administered by the Inter-American Development Bank (IDB) and will be used for reproductive health and nutrition initiatives and to fight illnesses such as dengue fever and malaria over the next five years. Salud Mesoamérica aims to effect a significant decline in the mortality rate of children under five, a reduction in chronic malnutrition and an increase in micronutrients among infants and pregnant women. An estimated 10 million people in the region will benefit from the initiative. Pictured at the launch are (L-R) Trinidad Jiménez (from Spain’s ministry of health), Bill Gates, Carlos Slim and Luis Alberto Moreno of IBD.