People in UK encouraged to ‘give more’

Thursday 26 April saw the launch of the Give More campaign in the UK, aiming to encourage people to make a public pledge, via the campaign website, to give more money, time or energy in the next year to the causes they care about and to get us all talking more about giving.

An idea that came from the Philanthropy Review held last year, the campaign is a response to rising need in communities and the pressure on charities and community groups to deal with increased demand for their services while resources are stretched.

The campaign was launched on the back of new research that showed: 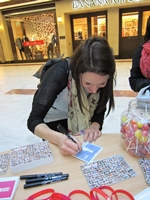 Four launch events were held simultaneously in London, Glasgow, Belfast and Cardiff, where members of the public were encouraged to talk about giving and make a pledge of their own to add to a public pledge wall in each location. The launch attracted widespread media coverage and hundreds of people signed up at the events, joining the 700 people who had already pledged via the website. (Pictured: a member of the public making a pledge at the London launch.)

The campaign is not affiliated to any particular cause or charity, and is independent of government. Its aim is simply to inspire as many people as possible to give more. It is being led by a steering group, chaired by Trevor Pears, executive chair of Pears Foundation.