Taking the blinkers off the Arab human rights community

In November and December 2013, the first author guided by the second author undertook a field trip to several philanthropic organizations in various parts of the Kingdom of Saudi Arabia (KSA). The trip was part of an effort to measure the impact of the programmes supported by the King Khalid Foundation (KKF), based in Riyadh and established in 2001. The trip also gave us some insights into the state of philanthropy in Saudi Arabia generally. 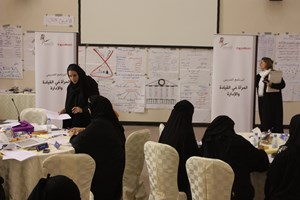 But first, the KKF programmes. Their main purpose is NGO capacity-building. This arose from KKF’s discovery, when it first started making grants several years ago, that it couldn’t find skilled organizations to support among Saudi Arabia’s approximately 200 NGOs at that time (the number of NGOs is now around 900). Our evaluation showed that KKF’s programmes have helped pass two laws, for protection of children and battered women respectively. However, KKF is not yet able to measure the full impact of its programmes such as youth employment or women’s engagement as it needs to define a clear theory of change, and the impact of these programmes depends on comprehensive legal, policy and economic changes within the country.

A similarly mixed picture is presented by philanthropy in Saudi Arabia in general. Annual philanthropic giving to causes within the country by individuals, foundations, corporations and the government ranks among the highest in the world – between 1.5 and 2 per cent of GDP compared to 0.5-1 per cent in most western countries. This level of support suggests vibrant social development, but this is lacking. The impact of all this giving remains weak and it does little to address the underlying causes of poverty. However, several positive efforts are under way to remedy this.

Changing attitudes
Changes in attitudes in Saudi Arabia are conducive to philanthropy’s playing a bigger role in development. Recognizing that simply paying unemployment benefits to young Saudis without attempting to create jobs for them is not enough, the government is directing some of its finances to the philanthropic sector to help solve youth unemployment. Business also believes that the philanthropic sector must play a key role in providing the young with the skills and mindset needed for the job market, and in helping to accommodate more women in the workplace.

The latter goal is now supported by a royal decree which lays down that all production in certain industries should be carried out by women. This decree and other like initiatives aim to increase the employment rate among women from its present 14 per cent to around 30 per cent of women working, which means that lots of development programmes are being planned to increase women’s employment skills and increase their access to amenities formerly closed to them. This will ultimately bring permanent benefits to the status of women in KSA. It also provides a golden opportunity for the philanthropic sector to enhance its role, while its financial sustainability will improve with the funds available from the private sector and the government. (Photo: KKF trains Saudi women in leadership and management.)

Endowments and innovative use of zakat
The use of ‘endowment’ funds to fund philanthropic organizations was the most innovative practice seen during the field trip. Foundations in several areas (including poor rural ones) have endowed shopping areas, residential buildings, pharmacies, clinics, etc, using the income generated from such investment to cover administrative and programme expenses. Also, zakat funding, which normally consists of simple handouts, is beginning to be made contingent on its use for specific purposes such as children, health or education needs, which also builds awareness among recipients of these priorities. These are budding initiatives in a region where endowing funds has not been easy. The way they develop may well have implications for the future of both Saudi Arabia and the Arab region generally.

While the developments surveyed here are not themselves revolutionary, they are signs of the growing importance of the philanthropic sector, which is increasingly engaged in key socioeconomic problems and improving its measurement of impact.[1] They may form the elements of a new Saudi philanthropy discourse which draws both on its rich culture of giving and on accumulated knowledge from other regions.

1 Most participants in a training run by Atallah Kuttab for key Saudi foundations in December 2013 indicated that they will use the training to develop a strategic plan with key indicators of success and a manual for good governance.

Good evening. I would like to know if the foundation offers support to individuals offering help to the children, elderly, and other needy groups in Uganda. I will be grateful for your quick response. Regards, Abdalah Mugaya