The many meanings of advocacy

Network of European Foundations – Establishing a fund for European journalism

On paper, advocacy may be one simple word, but GrantCraft found that its meaning can vary greatly. Foundation practitioners across Europe use the term to describe a wide and varied set of activities, ranging from making their voices heard and having their views taken into account to triggering and instigating policy change. In turn, ‘policy work’ can be broadly interpreted as any ‘activities aimed to influence policy implementation and change’.

The variety of these interpretations suggests that early in their discussions foundations, their partners and/or grantees should clearly define their brand of advocacy. By being explicit on the kind of advocacy they will or will not support, foundations can save potential partners’ time and resources.

Besides confusion about what is advocacy and what isn’t, foundations in Europe also differ about what distinguishes advocacy from lobbying. For many foundations and NGOs, while lobbying is felt to be driven by private, commercial or political party agendas, advocacy is seen as the pursuit of public benefit-related issues within a public policy framework. Certain foundations go further and detail the activities that may be covered by these terms. For instance, trying to influence a particular piece of legislation should be considered lobbying, while advocacy might be anything from influencing general public opinion or campaigning for a cause to denouncing infringements of the law and fighting for its just application.

The European regulatory framework adds further flavour (and confusion) to the debate by recognizing that different interests can be represented legitimately by different entities, whether they are businesses or foundations pursuing commercial or public interests. Regulation at the EU level seeks first and foremost to enhance transparency through the Transparency Register. 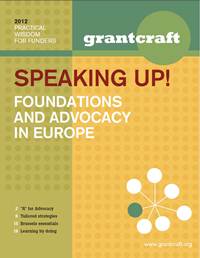 For the new GrantCraft guide Speaking Up! Foundations and advocacy in Europe, we analysed foundation publications and websites and conducted over 30 interviews with staff from foundations all over Europe. Our sample was biased towards foundations that are active in advocacy or funding such work. Rather than tabulating variables influencing why foundations choose to engage in advocacy or not, we primarily wanted to explore how foundations in Europe are doing this work.

That said, the topic ‘why advocacy?’ invariably emerged. While some foundations said that they would not engage in advocacy as they wished to remain neutral, others strongly disagreed with the notion of neutrality or impartiality: ‘This is the core of the debate within the foundation sector. There are foundations that are not neutral but they would argue they are. I think it is a way of refusing to nail your colours to a mast. Once you put money somewhere, once you make a funding decision you are absolutely an intervener in the game. So no foundation that is funding something is ever neutral.’ Other reasons not to engage in advocacy that were mentioned are the (reputational) risks involved and the capacities required, as well as concerns over legal and regulatory impediments (information on regulation in some European countries is included in the GrantCraft guide).

Foundations that engage directly or indirectly in advocacy claim they can bring a lot to the process. Interviewees felt foundations bring substance and concrete examples to policy makers’ reflections as well as independent opinions and resources. Some observed that foundations can bridge gaps between different stakeholders, such as between grassroots organizations, scientists and policy makers, and link policy to reality. Many interviewees mentioned the diverse networks that foundations draw on.

The stories GrantCraft collected highlight the value for foundations of developing advocacy: it makes change possible, it can broaden the scope of that change and it can make change stick. As one practitioner puts it: ‘For the foundation, the benefit of doing advocacy is certainly that you have greater impact, and I would say also greater visibility and greater leverage compared to doing only the traditional grantmaking and operational activities.’ The GrantCraft guide also aims to capture some of what foundations have been learning about doing and funding advocacy, but there is room for improvement in that respect: more deliberate strategizing, working from a theory of change and tracking outcomes are all critical ingredients.

Rosien Herweijer is director of GrantCraft at the European Foundation Centre.
Email RHerweijer@efc.be

For more information
Visit http://www.grantcraft.org to download Speaking Up! Foundations and advocacy in Europe