WSFF to make business case for investing in sanitation

A new initiative has been launched in the shape of the World Sanitation Financing Facility (WSFF). It consists primarily of NGOs and multilateral organizations – UNICEF, Water Supply and Sanitation Collaborative Council (WSSCC), Ashoka, SROI, Keystone and UBS among them. The key aim is to attract government and corporate attention to the neglected issue of sanitation, to establish sanitation for the poor as a viable market opportunity, and to draw in financing from across the funding spectrum.

The WSFF will proceed on the basis of a proposal, recently compiled by McKinsey, which makes the case for creating a process to create cross-sectoral collaboration in tackling what is the worst-performing of the Millennium Development Goals. At the present rate of progress, an estimated 2.7 billion people will be without access to proper sanitation in 2015. Apart from the hardships involved, poor sanitation costs the economies of many developing countries the equivalent of between 1 and 7 per cent of annual GDP. This is a market opportunity valued at potentially as much as $500 billion per year. 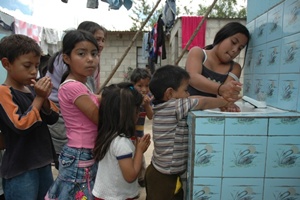 Under the proposal, four local studies will create a replicable toolkit to highlight the case for investment in sanitation, calculating the shortfall in supply, the costs and economic/social benefits of specific investments, and the work and financial and legal tools needed to bring about rapid and large increases in service coverage. They will also seek to draw in parties from all sectors in the countries in question . The proposal envisages work beginning in January next year. The full cost of creating a credible toolkit is estimated at $2.9 million, with an additional $1.5 million needed to establish WSFF as an institution, to ensure the model is scaled to other locations.

The initiative is also looking for additional technical and financial partners. The organizers concede that raising the R&D money through the facility will be a big challenge, but they see a number of positive signs: the growing realization that we need to look at systemic solutions based on development outcomes; the support of major forces like WSSCC; the involvement of McKinsey, which is now helping to bring in corporate sector partners; the UN’s offer to host the initiative, and the recognition by the UN at the end of September that access to water and sanitation is a universal human right.

Selecting charities on the basis of good impact reporting