EVPA Annual Conference 2016 – a sketch from the floor

European venture philanthropists get together in London

The European Venture Philanthropy Association’s (EVPA) 2016 conference was its biggest yet attended by over 500 delegates. Held in Paris for the first time in a decade, Andrew Milner shares his offbeat impressions.

The opening session struck an unusually spiritual note. A guided meditation led by Bart Weetjens of the Wellbeing Project who told us that if we were all looking for a better world we had to be internally well. He extolled the virtues of wellness and said that organizations whose leaders meditated were more successful and their staff was more productive. I gave it a try but after a minute caught the eye of the official photographer who was slouching with his arms folded. Then someone’s mobile phone rang. No-one took any notice. Whether because they were all too well-mannered or because they had achieved a state of transcendence, I can’t say. What I can say is that most of the people I spoke to liked the meditation.

The opening speakers were keen to stress terminology. Hedda Pahlsonn-Moller, one of the conference organizers, said the use of the term ‘societal’ in EVPA productions was deliberate – it embraced both the social and the environmental. Bernard Uyttendaele, EVPA’s chief executive, said he always talked of funders and investors. 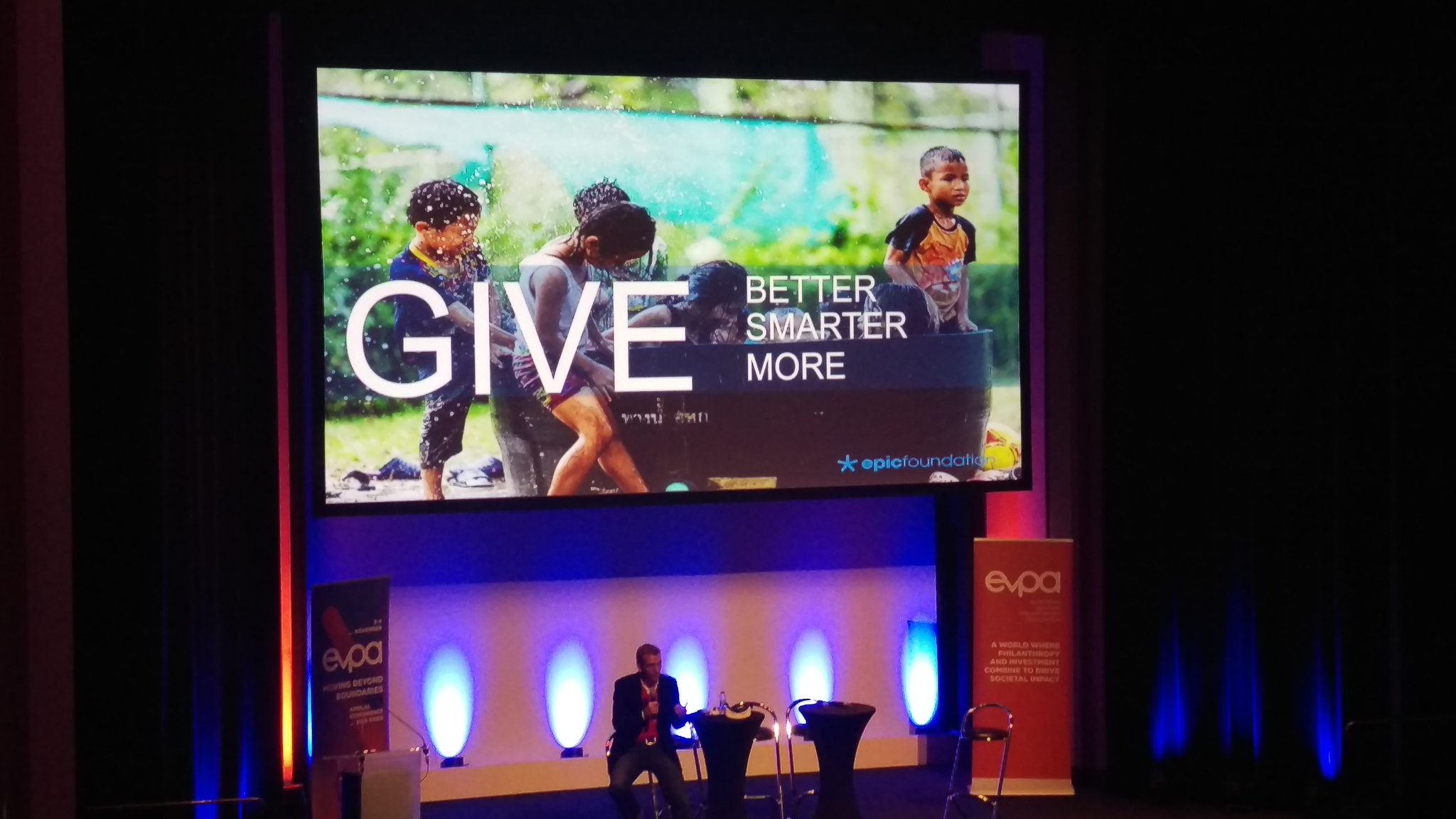 This was the only plenary and the four lead speakers talked with optimism of a new generation of social entrepreneurs rising. And the keynote speaker likewise – Alexandre Mars of the Epic Foundation, a businessman-turned-philanthropist who told us that, while everyone had a role to play, we should each find our ‘unique impact’. Epic’s area of work was young people. They were strict in selecting projects, but once they’d done it, they approached ‘money and power’ with humility. Social entrepreneurs should be ‘normal, not exceptional’ and this was happening with a new generation demanding that the companies they worked for and whose products they consumed should have a social impact.

Olivier de Guerre, meanwhile, struck a retrospective note. Ten years ago when the EVPA conference was last held in Paris, it – and venture philanthropy – was dominated by banks and private equity funds. Now, he said, the idea of business technology for social enterprises is a message that has got across. The main issue now, he said, was going to scale. Can we co-create, he asked? That was the question this conference needed to answer. If we can, he said, we’ll have an impact.

‘It’s as if we’re spending all our time talking about how the engine works, but the car’s going nowhere.’

A couple of points here about growth and co-creation. The event was subtitled Moving beyond boundaries and this seemed to be true in a literal sense at any rate. Not only was it much bigger than the first events (500+ delegates), but there were delegates from Asia and Africa, as well as from Europe. It drew a wide range of interest, as well. There were social entrepreneurs, philanthropists and funders of all stripes, bankers and advisers and even a lawyer or two. This was no coincidence. As one delegate I spoke to remarked, the EVPA has deliberately tried to cast a wide net and, by and large, it has succeeded. Symbolically, too, though there seems to be a lingering unease about the seamlessness with which different forms of resource provision have blended. Why else should Bernard Uyttendaele insist on talking about funders and investors, or why should Luciano Balbo demand an end to the dichotomy between investing and philanthropy? If we really are one big family working towards the same end, why should we keep telling each other so? I asked an African delegate with experience of the European Foundation Centre conference, how the two compared. ‘It’s the same,’ he said with a grin. ‘Same people, same atmosphere.’ I’m not sure whether the organizers would think that was good or bad.

Having said that, the spirit of cooperation and collaboration was very much in evidence. Workshops were calculated to appeal beyond a narrow conception of venture philanthropy. And there was plenty of variety. One of the most intriguing I went to was on the Friday (the better of the two conference days) entitled Movement making: an interactive workshop exploring chocolate, aspirations and how organizations can build movements through their work – well, you can see how it piqued my curiosity, It really was interactive and, among other things, tried to discern through a series of exercises what role you played in a group. I turned out to be an innovator. Who knew? And there really was chocolate – I ate mine.

Workshops were variable in quality, as always. The best were, like the chocolate one, interactive. Participants did more than just listen and ask the occasional question. While there was only one plenary (unless you count the wrap-up), many of the sessions were like mini-plenaries, with a panel of three or four presenters and a moderator. Even if it’s hard to avoid, it’s a formula that needs refreshing. Some of the sessions felt gruellingly long, too, at ninety minutes each.

‘Conferences are like the internal combustion engine – a lot of the energy is wasted, but nobody’s come up with anything better so far.’

The dragon’s den session on the Friday was an intriguing idea that tried to add variety to the pattern. In a reversal of roles, a group (too big a group at five) of funders tried to sell themselves to a panel of social entrepreneurs. Among the top priorities for both sides were honesty from each other and a shared understanding of what they were doing. So it was a nice idea and some interesting things were said but, I’m sorry to say, I found the format jarring. There was an attempt at a tongue-in-cheek staging (one of the presenters wore a mask but had to take it off because no-one could hear what he was saying) which didn’t achieve the lightness of touch intended.

I wonder, though, how many people go to conferences for the sessions. More likely people go to meet and make contact with others and there was plenty of opportunity for that with long lunch breaks and an evening at the French Foreign Ministry that was entirely, relentlessly networking – no sit-down dinner – apart from a guided tour which included the gold bath in which Winston Churchill once bathed. Not an image to dwell on.

There were other things to admire, too. The conference was pretty slick in its organization. My sense is that most found it good or at least worthwhile, though one delegate wondered where the sense of urgency was. From his perspective, Europe is in meltdown economically and socially, yet you wouldn’t have guessed it from the tone of the conference. ‘It’s as if we’re spending all our time talking about how the engine works, but the car’s going nowhere.’ Someone else wondered where the NGOs were. It did seem as though the only target group of assembled investors/donors were social enterprises and entrepreneurs, who were present in numbers. 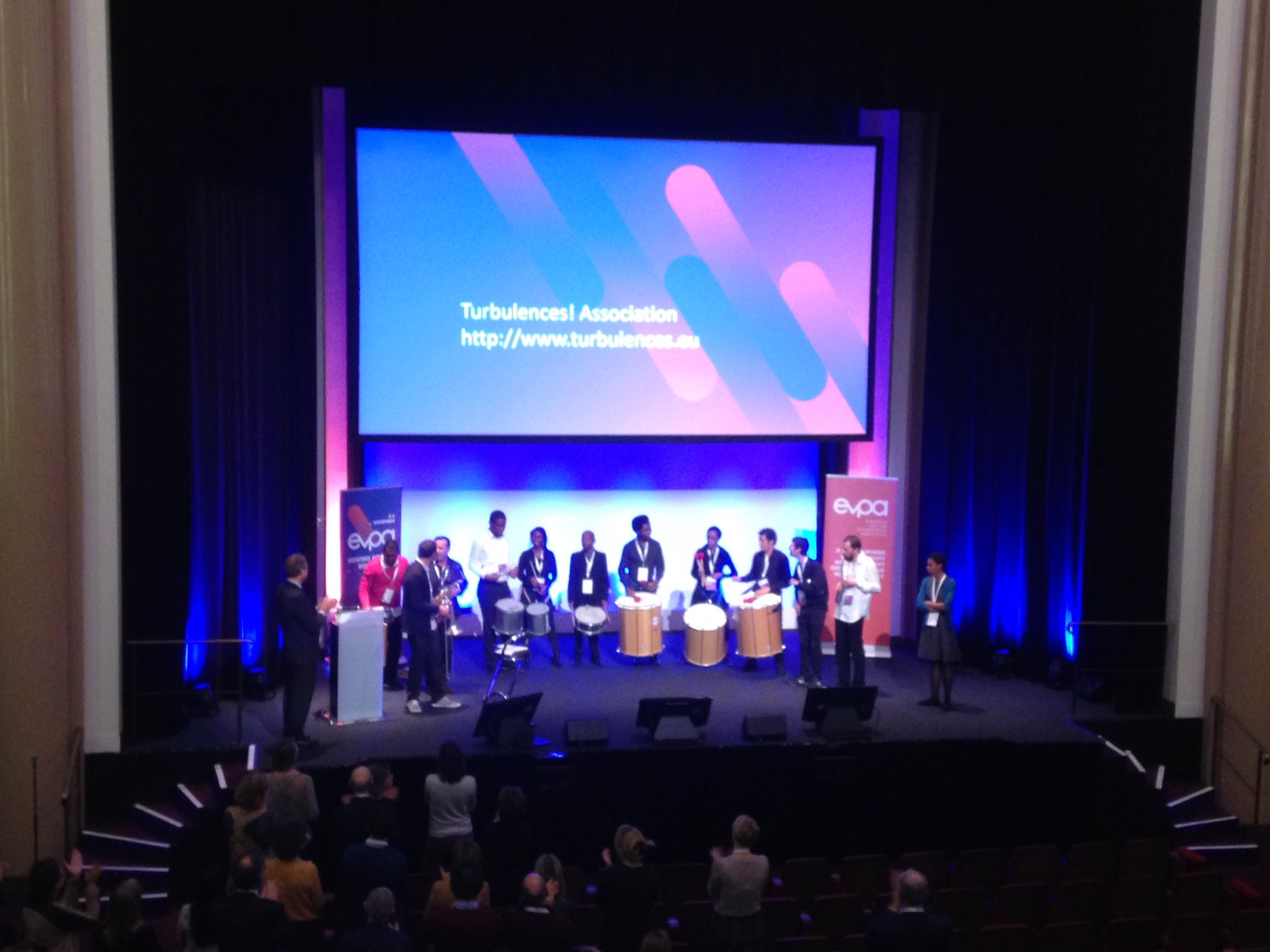 Probably most conference-goers are philosophical enough to take the good with the bad and not expect too much of either. They will have drunk coffee, eaten finger food, shaken hands or kissed the cheeks of old or new acquaintances, made conversation, been alternately bored and stimulated all while simultaneously trying to eat and balance a plate or glass. In the end, it could be that conferences are like the internal combustion engine – a lot of the energy is wasted, but nobody’s come up with anything better so far.

Everybody liked the last session, though, It was led by Turbulence Association, a social enterprise which, among its other activities, has a percussion and wind ensemble comprised of young people with disabilities. We’re a serious lot, us philanthropists and philanthro-poids and bankers and social investors and advisers and lawyers, but a bit of exuberant music put a smile on everyone’s face.

For further coverage from the event, see here.

The echo of constituent voice