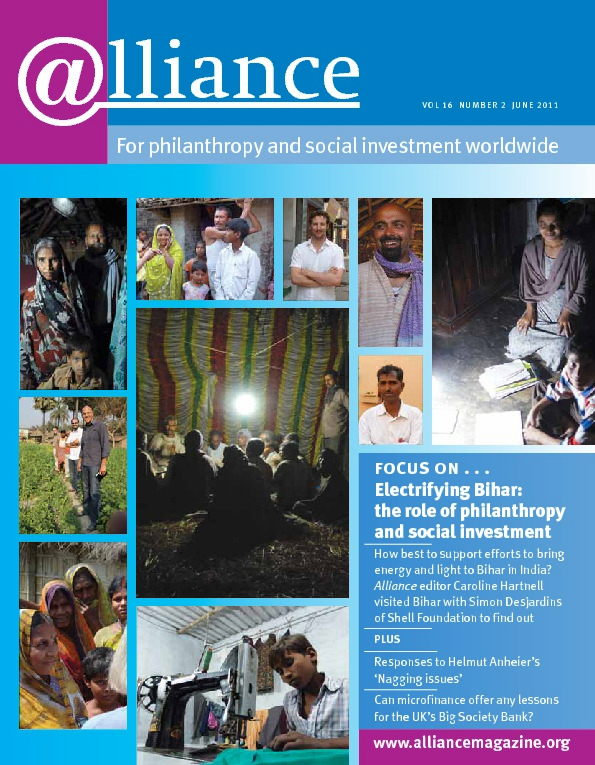 In December 2010 the UK Government included within its Green Paper on ways to encourage giving in England and Wales a deceptively short and speculative paragraph which proposed ‘that foundations should make a minimum pay out annually, as is the case in some other countries, as this could result in extra income for charities’. The concept of mandatory payout is one that has not been actively considered in the UK. But whether or not it is pursued, the proposal may be an indication of a wider change in the operating context for endowed foundations in particular, following from the tight fiscal environment now apparent in the UK and many other countries.

Our speculation on the origins of the proposal is that it was one of many ideas plucked out in the hope of finding more money to support charities, and came without deep thought. A government that is simultaneously desperately seeking funds and wanting to encourage philanthropy in order to replace services cut as well as to support the Big Society[1] has now discovered charitable assets, predominantly those of foundations, and wants to see them deployed in pursuit of its own priorities.

Accidental or not, the issue of mandatory payout is now in the public domain in the UK. There is wider awareness of the endowed assets of foundations, if often without understanding of their long-term or income-generating roles. Recently ministers have been speaking of their aim to ‘unlock £78 billion of charitable assets … to help build the “big society”’ – a comment possibly directed at encouraging foundations to provide increased finance for social investment. However, it simultaneously raises the profile of foundation assets in the popular mind and implies that they are under-used resources that can be redeployed. This sort of profile is neither familiar nor comfortable for most UK foundations, which may now need to become more aware that their processes and outcomes are in the public eye, and likely to remain so.

This suggests a response that emphasizes foundations’ missions, strategies and public benefit, and makes clear that our focus is on what foundations need to do or spend in order to be most effective. That is the real issue, and what we need to do is collate the powerful stories of how foundations are spending their assets now with the aim of increased public benefit. But we may also need to support foundation trustees in the management of their investments in order to generate greater returns, and emphasize the effective use of, and social return upon, their assets.

The fear from the payout proposal is that foundations’ focus will become getting money out the door, not effectiveness – in what other field would we consider measuring the effectiveness of an organization by the amount it spends in a year? – and that they will be driven by compliance rather than innovation. This will not of itself deliver greater public benefit.

And what of the payout proposal? We will not know the outcome until mid May. Having sought the guidance of our endowed members, who were universally opposed to the concept, ACF has made a robust and critical response to the Green Paper. We had many reservations about the limitations and complications of payout, arguing that the proposal would quite probably couple expensive regulatory change with disappointing results for operating charities. But our central message was that if the government wants to address the under-use of charitable assets by a limited number of charitable trust funders, then our regulator, the Charity Commission, needs no new and complicated legislation to challenge this inertia.

But those can be complicated arguments to make, and few outside of foundations understand the peculiarities of our funding and operational models, or the often indefinite timespan of the permanent charitable endowment that is so unusual in a rapid-response society. Conversely, statements about the massive sums of apparently under-used charitable assets available for public use are more easily set out. Those assets, and foundations as their managers, are likely to remain in the public eye. Hence our new challenge may be to explain more clearly foundations’ distinct role and their unique contribution to an effective and dynamic pluralist civil society, lest we leave ourselves exposed to further dawn raids on both our assets and our independence.

1 ‘Big Society’ is an over-arching theme of the Conservative Party, now in government, whereby civil society is renewed, and services extended and delivered better, through more extensive participation across all levels of that civil society. However, this idea is not uncontested.