Social innovation takes off in Europe

Looking beyond the echo chamber 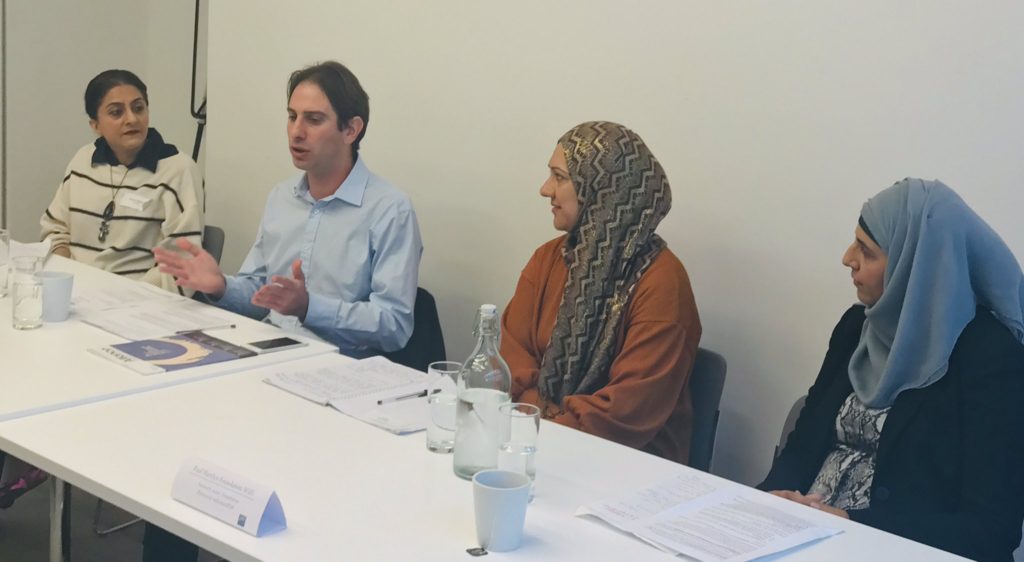 ‘Muslim philanthropy is limited only by its imagination,’ said Irfan. New to institutional philanthropy, Irfan spoke of the tradition of Islam’s faith-inspired giving, which she characterised as traditionally reactive, overseas emergency relief rather than strategic giving which focuses on underlying issues. Irfan has also recently written of her experiences at the Global Donors Forum for Alliance.

Irfan created her discussion around the context of identity and migration, referencing three steps in the journey: initially supporting themselves and their country of origin post-migration; creating infrastructure in order to support local communities and then finally, starting to fund wider projects. Irfan referenced American Jewish philanthropy’s parallels with these steps, before considering that Muslim philanthropy ‘is probably now at stage two in the UK’.

Just suddenly occurred to me that this was one of the first times I’ve seen an all female panel in philanthropy talking about a topic which didn’t relate to our gender…credit to @charleskeidan and @Alliancemag ! pic.twitter.com/huefrdMLDH

‘The biggest challenge for donors is that giving is a personal, private act,’ said Irfan. What is needed is to convince them of the purpose and benefits of strategic, collective giving – ‘which is the single most difficult hurdle.’ Irfan referenced Luton, a borough in the UK that has no majority community, but does have a large Muslim community, which raises mullions a year for overseas relief and yet they are chronically underfunded themselves. Irfan argued the need to prioritise, think of long-term social change and for the community to put itself in a position to take an equity-based, grant making perspective. ‘Mainstream, traditional foundations have failed underfunded communities.’

Another chronic problem is trust, or lack thereof, posited Irfan. The only philanthropic intervention given to Muslim communities in the UK had been through anti-terrorism initiatives. This has proved incredibly destructive and corrosive to external relationships. ‘We face scrutiny over our validity.’ Yet now, things are changing. Irfan ended her discussion by announcing that the opportunity is here to tear up the rule book, bringing sustainability in the sector – and with it, trust – both within and outside of Muslim communities.

Bunglawala spoke of the Aziz Foundation, and its mission to work with disadvantaged communities, four in particular: African-Carribean, Gypsy-Traveller, Muslim and white working class communities. With underfunded Muslim communities falling below certain indices, and external associations of religion and extremism, Bunglawala focused on her interest in how people relate, and align, to Muslims.

Institutional Muslim philanthropy necessarily brings public accountability and, Bunglawala states, ‘it is an ongoing dialogical exercise… it is important to be conscious of the choices we make as institutions.’

Recent polling, supported by several foundations including the Aziz Foundation, which asked individuals in the UK ‘Do people think that Islam is compatible with British life?’ showed some startling data. Whilst 20 per cent said they didn’t know and a quarter of respondents said ‘yes’, around fifty per cent of those polled said ‘no’, that Islam is not compatible with the UK.

The Aziz Foundation is only three years old; ‘we’re still learning and consolidating institutional processes.’ Bunglawala spoke of the foundation’s desire to ‘see a rich, diverse and plural community engaged in its own infrastructure.’

Institutional Muslim philanthropy necessarily brings public accountability and, Bunglawala states, ‘it is an ongoing dialogical exercise… it is important to be conscious of the choices we make as institutions.’ It is therefore important to collaborate with other foundations and do work together, rather than simply continuously replicating. Where are the differences, Bunglawala argues that it is just as vital to align that differentiation and employ strategic visioning.

With this powerful direction in mind, Bunglawala ended her statement by stating: ‘I therefore wouldn’t ask if Muslim philanthropy is punching under its weight; rather, I’d ask whether the punch is being felt by wider society.’ Her philanthropy is not one that enables social change from the top, but rather that is driven from below.

#muslimphilanthropy F. Irfan: for too long the only philanthropic intervention available to Muslim communities was given under the rubric of anti-terrorism initiatives. This is the way of giving that is the most destructive to trust. @Alliancemag

Huda Jawad looked more closely at Muslim philanthropy trends. ‘The act of giving – philanthropy – is in itself a tenet of Islam,’ she said and However, Jawad believes, it is now important to translate traditional behaviours of giving into present-day needs. ‘Globally, Muslims have the highest rates of young people… foundations and organisations who can speak to them is very important.’

Jawad also spoke on the necessity of Muslim philanthropy recognising single mothers, poverty, domestic abuse, food banks and older, more isolated Muslims. Whilst external judgments maintain that religions are regressive and violent, Jawad wanted the audience to recognise the ‘desire for capacity building, increasingly more gender-based work’ and an ever-growing attitude of ‘we can’t not talk about this anymore’.

During the Q&A discussion, Aditi Thorat at Thomson Reuters Foundation asked how, given recent Saudi revelations, the panellists see their role within philanthropy as ambassadors. Irfan responded that to be an ambassador ‘is a role thrust upon any minority. It is a responsibility and also a burden’, before warning that this is an area where new foundations must certainly tread very carefully.

Another question came from Sarah Dunn at The Power of Nutrition, asked who the key players are in terms of leading the way for transparency. Jawad answered that it is simply Muslims who donate. Whereas previously there had been an assumption that ‘giving’ would automatically mean ‘redistribution’, Jawad argued that it has become apparent that this isn’t happening. Those in the community are much more savvy about wanting to do good, and asking ‘How is this contributing to the benefit of humanity?’ Jawad’s final point stated that whilst there is absolute value in the secular, and that it is important for secular organisations to not appropriate Muslim causes, that her concern is working with religious communities. These communities, and particularly the women within them, are particularly important as the barriers they must overcome are just that much harder.

Amy McGoldrick is the Marketing & Advertising Officer at Alliance magazine

To watch the full recording of the panel debate, click below.