APPC – Exploring diaspora giving in Asia and the Pacific

I had dreamed about this trip for years. I read thick books about the history of China, watched films, learned strange-sounding names, and even bought a ‘crash course’ in Mandarin. My enthusiasm to learn Chinese also crashed in about a day but I solaced myself with the thought that some English would be understood (at least one positive outcome of globalization).

Finally, I got my visa and, on a grey February day this year, boarded a plane to the mysterious country of plastic toys and portraits of Mao.

CAF has wanted to explore the possibility of developing civil society and philanthropy in China for over ten years. In the mid-1990s, then CEO of CAF Michael Brophy and Andrew Kingman, then director of CAF International, made an exploratory visit. This showed both the enormous potential and the enormous challenges of China. At the time, CAF decided to concentrate on those countries where it had already established a presence.

So this trip was both a comeback and a fresh start. CAF Executive Director Russell Prior and I visited Hong Kong, Shanghai and Beijing. In each place we met local NGOs, philanthropists, researchers and businesses. Our interest was both practical – what could be done to encourage and further develop philanthropy in China – and, as far as I was concerned, personal. I wanted to know what the country is like that until recently had no philanthropy and now has over 1,100 private foundations, 30 times more than Russia, and which Russian politicians highlight as a successful example of economic progress without the ‘orange flavour’ of the Western bug called democracy.

China: front and back cover

If you think of China as a magazine, the front cover is impressive. For over 15 years, it has been the leader among so-called BRIC or emerging market countries in terms of the pace of economic development, with GDP growth of 8-10 per cent a year. Over the last 20 years, it has lifted over 200 million people out of poverty – without microcredit programmes or international aid. Chinese companies buy assets in Europe and invest heavily in Africa. Finally, China has achieved at least two out of three Soviet dream goals: it goes to space and it hosts the Olympics. The third – to be the first in classical ballet – I am sure is not far away.

The back cover is less impressive. While China now has one of the largest and fastest growing middle classes in Asia, some 200 million Chinese live in absolute poverty in deprived rural areas. Politically, China remains a tightly controlled autocratic state where the Communist Party and the central government regulate every aspect of life. Volunteer from Chinese People’s Public Security University with migrant children – part of an education programme supported by the Narada Foundation. 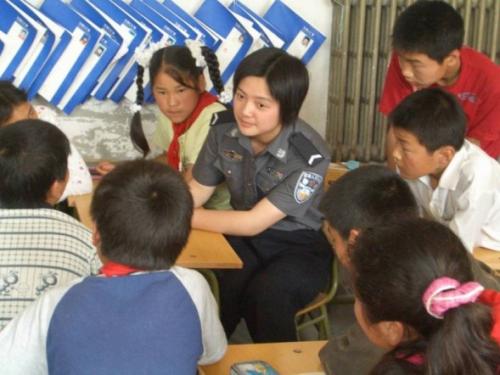 So, on the covers China seems to be a slightly modified version of the Soviet Union, sort of USSR 0.4, and enjoying a capitalist boom within a prison cell. What civil society and philanthropy can you talk about in such conditions? Inside the cover, however, is a more complex picture with a vibrant civil society. My first discovery was that the Chinese government is much more supportive of NGOs than the current government in Russia and that state control, while considerable, is very pragmatic: the Chinese government encourages any development or investment that will further improve the country’s economic or social situation, and so actively supports thousands of social, educational and other NGOs, and non-registered groups working on community needs. It is hostile to activities that border on the political or which are aimed at spreading Western-style democracy. I was surprised to learn of an international programme to improve the rights of prison inmates operating freely in China, officially unregistered but with government support.

This situation is paradoxically different from that in Russia. There, until recently it was comparatively easy to register an NGO – there are now over 350,000, nearly half of which exist only on paper. Even since the introduction of a more complex and generally repressive registration regime, it is still far easier to set up an NGO in Russia than in China. At the same time, it is now extremely hard for an independent organization in Russia to establish working relations or receive ongoing support from the state or influence policy.

Not in China! While it has one of the world’s harshest NGO registration regimes, the Chinese government has developed a wide range of joint programmes and initiatives with NGOs, and works not only with GONGOs (government NGOs, officially so called), but also with independent NGOs and non-registered groups. The government bases its judgement on concrete outcomes and risks in a particular situation and allows the civil society sector in China to grow against all odds.

My second discovery was that differences of opinion from the official line are possible and even welcome in the non-profit sector. In Shanghai and Beijing, we attended meetings with a range of Chinese NGOs and they reminded me of meetings in Russia in 1995, where there was heated debate and serious, free thought about what people could do to improve the situation in the country. I miss this urgency of action and belief in the Russian non-profit sector today, which, in my view, has somehow lost its sense of mission.

My third discovery was Chinese philanthropists. I was not surprised they existed. What surprised me was that many Chinese donors think and act much like many of their Russian counterparts, being active, outspoken, forward-looking and democratic, sometimes more democratic than the NGOs they support. They are business people and they invest in civil society in the same calculating way they make business investments, because it, too, is necessary for their business. For a moment I felt I was on the West Coast of the US.

Questions for China and beyond

My visit raised more questions than answers. Some of these questions Chinese NGOs and philanthropists will have to answer themselves; some we need to think about outside China.

One key question for Chinese NGOs is how far they are ready to go in adapting to the policy of the Chinese government. How much are they willing to sacrifice in their policies, views and practice in order to survive? A strategic approach to solving social problems is not possible without considering policy. As in the Russian language, in Mandarin policy and politics seem to be one word and any mention of policy therefore frightens Chinese NGOs. One day, it will become clear that in order to solve problems of poverty and exclusion, one needs to start talking about labour rights, property rights and other subjects that are so far still ‘taboo’ in China.

Another question specifically for Chinese philanthropists is how their strategic approach and their wish to be on a par with Bill Gates and other famous US donors can be reconciled with quite totalitarian labour practices and often the violation of local community rights in expanding their businesses. Take the case of internal migrants, people who move from the impoverished rural areas of China to the prosperous cities of the south-east. Working mainly in the manufacturing and service sectors, they often live in dreadful conditions in special dormitories near their workplaces. Due to a peculiar system of local residence registration, many do not have access to government-provided health care, social services or education. The majority of Chinese donors we spoke to cited this as one of the most pressing problems in China. At the same time, they employ internal migrants in their own factories, build dormitories where the doors are locked every evening, and employ guards to patrol the area. The widening gap between business practice and philanthropic approach is something that new Chinese philanthropists will have to address.

Then, there are questions for those outside China. The significant poverty alleviation in China in recent years has been achieved through massive industrialization, not aid or NGO projects. Do donors need to learn a lesson here? There is no consistent position in the donor community on China’s economic and social policies. Are we afraid to learn that people in Africa and South Asia dream of repeating China’s success, even at the cost of democracy and freedom?

While the international business community falls for the front cover of ‘China’ magazine and praises its economic growth and tenacity, the donor community focuses on the back cover and sees China as it now sees Russia – as an autocratically governed country with no hope and no wish to change. China, like Russia, is neither a beacon of economic victory nor a classic tyranny. It is a complex and constantly evolving country, and offers us lessons we would do well to learn for our future work both there and elsewhere.

Who, how and where? The tricky business of giving to charities in developing countries