Double advantage: To be effective, Indigenous peoples’ movement must give women a greater role

When I got married my husband, Mansur Labada, forbade me to make money. I was pregnant with our third child in August 1998 when he was jailed for leading the resistance against the expulsion of the Moronene people – our people – from The Rawa Appa Watumohai National Park in Southeast Sulawesi, an Indonesian island east of Borneo. 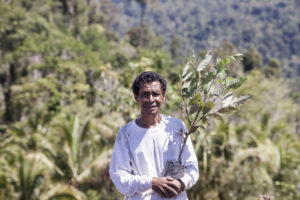 Mursid Habu, a teacher planted nutmeg in their customary territory. Nutmeg is a symbol of resistance by Indigenous peoples in Banemo against oil palm plantations.

Once a week, I took my two small children to visit Mansur in jail. We brought him food and clean clothes. The prison was hundreds of kilometres from our home. The journey there would take a day and sometimes we had to stay overnight. Mansur had previously received a salary and rice allowance as a civil servant. When he was jailed, this was stopped by the government . My extended family was harassed by government officials and told not to help us. Heavily pregnant and helpless, I had to be the mother and father of my young children. I knew I had to do something to earn money, so, one evening, I decided to make bread and ice cream. The next morning I looked for milk fish seeds, and made a hut of twigs and coconut leaves for my children to shelter while I sold my produce. More than a year later, Mansur was released from prison, but we remained entirely reliant on my earnings. Even when he eventually returned to work, I chose to continue contributing to our family income. I am currently working with other Indigenous women. We started a small business and share the profit equally, with an agreed part donated to our community, so that other families will not find themselves helpless in an already vulnerable situation.

The contributions of women to Indigenous peoples’ resistance movements are, too often, considered less important than those of men. The stories of their successes and failures are critical to the continuation of the push for rights, but they remain unheard. One example:  I have known The Moronene Peoples’ case since I started to work at Aliansi Masyarakat Adat Nusantara (AMAN – the Indigenous Peoples’ Alliance of the Archipelago) in 1999 but only heard the story of Mama Wati from her two decades later. I was saddened, ashamed, but not surprised that it took me so long to learn how she sustained a critical moment in our resistance and set up the infrastructure to ensure the same vulnerabilities would be lessened for her community. Mama Wati’s story is one of countless invisible indigenous heroines across the Indonesian archipelago.

AMAN strives to be both a modern and a traditional organisation, blending realities in an intersectional way

The movement for Indigenous women’s empowerment is still, in many ways, struggling to embrace a wider culture of inclusion. We too often consciously or unconsciously limit women by attaching to them characteristics such as the owner of the womb, nurturers, care givers, providers of food and nourishment, healers and other qualities that we think exclusive to women. We similarly burden men by giving them various roles that represent masculinity.

These simplistic polarisations mean we fail to give equal value to the different roles of Indigenous women and men. In many stories of Indigenous resistance, we seldom hear about Indigenous women, women like Mama Nae Sinta Sibarani in Porsea who stripped naked to stop police and bulldozers from PT Inti Indorayon (now Toba Pulp Lestari) destroying their ancestral territories. Or Mama Yosefa Alomang, who fought against PT Freeport’s seizure of Indigenous Papuan territory. These two women stood on the front line as warriors. But warriors come in different forms. There are also women we hear almost nothing about: those who supply logistics to the front lines, or continue to farm in the midst of company invasions, or cater community meetings, or take care of the whole community when men are imprisoned by, or in hiding from, security forces. These women and their invisible labour are considered ‘ordinary’, less heroic, and therefore we take them for granted.

Organisation and leadership roles
Because of these levels of discrimination, many women neither have a voice, nor feel entitled to have a voice in making decisions that will have a direct impact on them.

When AMAN was established in March 1999, its Constitution emphasised representativeness and the establishment of a safe council that reflected the diversity of regions, and leaders from each consisting of one man and one woman. This did not just happen, but was fought for by female delegates present at the founding congress: Mama Nae Sinta, Ibu Intan Bako, Ibu Den Upa and dozens of Indigenous women delegates from all over the archipelago worked to make this a reality for themselves, and for future generations. They ensured that AMAN must and would become a platform for Indigenous peoples’ struggles that included and recognised indigenous women. 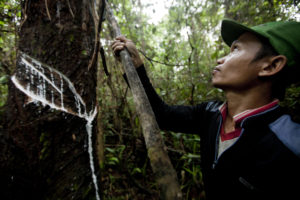 The legacy of Mama Nae Sinta and friends makes AMAN what it is today. However, it is important to realise that principles on paper will not come true if there is no imperative for translating them into reality. AMAN strives to be both a modern and a traditional organisation, blending realities in an intersectional way, while understanding ours is a reality where individual and community safety and survival take various forms, in which women are often discriminated against, and still cannot be taken for granted.

Strengthening Indigenous women as an organisational agenda cannot be separated from the role of the leader. In 2007 Secretary General of AMAN, Abdon Nababan, established a Directorate for Indigenous Women led by Rukmini Paata Toheke. Subsequently, he formed a Technical Assistance Team composed of women activists to support the work of the Directorate. The topic of Indigenous women was then mainstreamed into all AMAN’s programmes to secure resources and raise awareness within AMAN itself. Later in 2011, the mainstreaming strategy was adopted in standard operations across AMAN.

The work of the Indigenous Women Directorate led to establishment of PEREMPUAN AMAN right before AMAN’s General Assembly in 2012 as AMAN’s wing organisation dedicated to Indigenous women. The role of PEREMPUAN AMAN is the key to strengthening of Indigenous women as it serves as a space for them to openly and confidently discuss their situations. It is a platform for Indigenous women to agree on a shared agenda and strategy in their communities, within AMAN, and as an integral part of the Indigenous peoples’ movement. At the 2017 AMAN General Assembly, PEREMPUAN AMAN played an important role in shaping up the AMAN’s five years agenda from 2017-2022, including appointing women who became representatives on the National AMAN Council.

Indigenous women have contributed so much. However, challenges remain in many areas. 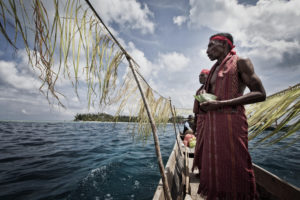 PEREMPUAN AMAN has been independent in implementing programmes and activities. It currently has more than one hundred local chapters across Indonesia. It has cadres who are agents of change at various levels. They work to ensure that Indigenous women’s tenurial rights are visible on Indigenous maps. They also became the main drivers of livelihood activities in AMAN member communities. Indigenous women support our younger generation with their ongoing ‘homecoming movement’ that includes the establishment of Indigenous schools, documentation, art works, and community media, helping us envision and implement a future where our identity is secure, and its changes driven by choice, not force.

Indigenous women have contributed so much. However, challenges remain in many areas. Much progress still needs to be made on the internalisation of Indigenous women’s struggles within AMAN. Resistance to PEREMPUAN AMAN among AMAN’s leaders is still prevalent. Ensuring better coordination amongst cadres in various places would be a critical enabler to strengthening women’s networks.

For the immensity of the sea