Empowerment is the key

The value of inconvenience

During the early 1970s, when I was living in India and working for the Ford Foundation, I had occasion to spend a couple of days visiting an unusually impressive rural boarding school led by a widely known and respected Gandhian gentleman and supported by NGOs. He was working in a particularly downtrodden part of India, where the dullness in people’s eyes, indeed in their entire expression and being, spoke of centuries of poverty and oppression.

The children in this school were learning reading, writing and the basics of sanitation and garden agriculture in the hope that it they were removed from their desperate home settings into this more progressive school environment, more modern attitudes would take root. These, in turn, would enable them to improve their own and their families’ living conditions in the future.

Some 30 years later, I met this man again; by then he had been working in the area for 46 years. I asked him what progress he had observed in that time. ‘None,’ he said. Seeing my shock, he allowed that perhaps the households and surrounding gardens were a little neater now.

Unfortunately, this is not an isolated case. Yes, some NGO education, health and income generation projects prove successful, mostly on a local level, but the persistence of extreme poverty and inequity in India – and elsewhere – stems from larger forces that deny the poor their fair share of economic progress. In India, all too often, politicians, civil servants, landowners, moneylenders and others at the ‘upper end’ of society have been willing to alleviate poverty only as long as doing so does not challenge the basic structure of inequality from which they themselves benefit. Some have been prepared to bribe, coerce, corrupt, even kill to prevent real change, even as the poor have little awareness of their constitutional and legal rights and little access to resources or services the government has theoretically designed for them.

Government and philanthropic development efforts have seldom addressed these root causes of poverty. Microcredit, for example, will not address root causes unless it replaces banking and credit policies that work against the poor and ensures that loan recipients, often women, control the use of their assets and income for the benefit of their families, particularly the children. Village electrification might be a worthy goal, but too often it is only the relatively well off who benefit because they have access to the necessary information to do so and frequently end up in control of the source of electricity. Similarly, land reform does not always improve the lives of the poor because they usually receive the worst quality land and lack the capital to make it productive. In short, economic development by itself will not lead to equity, because power inequalities skew the distribution of benefits. 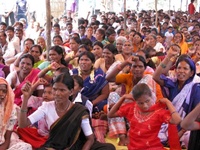 Among the very few philanthropies that focus entirely on the fundamental need for empowerment is the Unitarian Universalist Holdeen India Program (UUHIP). UUHIP focuses on India’s most impoverished and oppressed peoples: the dalits or ‘untouchables’, who are outside the caste system, and the adivasis or tribals, India’s indigenous peoples, and especially on the women in those groups, who are doubly discriminated against. Particular attention is paid to landless, migrant, bonded and child labourers.

Rather than provide grants for specific projects, UUHIP supports long-term partnerships with organizations of such peoples to help them increase their collective strength, take on difficult issues, challenge unequal power relationships and address the structural causes of poverty and injustice. These partnerships have used funds to organize unions and cooperatives; provide management, technical and legal expertise; advocate for land, water and forest rights, and increases in minimum wages; and campaign against the practices of untouchability and bonded and child labour. As a result, UUHIP partners have strengthened and built cadres of confident leaders and helped increase access for the oppressed to credit, natural resources, new employment opportunities, education, health, and other social services from which they were previously excluded. Increasingly, they have taken on more difficult and risky issues such as campaigns for dalit rights and tribal land, water and forest rights, recognition of home-based workers and street vendors, and a national agricultural workers minimum wage.

For example, partner organization Shramik Elgar enabled Pochu Lungu Shidam, among many others, to regain his rights after he had been beaten and hounded off his land in the western state of Maharashtra 20 years before. In Rajasthan, the group Ekal Nari intervened to force state government to meet long-denied pension obligations to poor widows; widows were also organized to stop the home evictions and domestic violence that were all too often their fate.

There are some remarkable individuals among these groups. One, Martin Macwan, director of the National Campaign for Dalit Human Rights, received the 2000 Robert F Kennedy Foundation Human Rights Award. Another, Vivek Pandit, organized oppressed tribals around issues of land rights, bonded labour, untouchability and police atrocities, and was awarded the 1999 Anti-Slavery Award by Anti-Slavery International in the UK.

Not all of UUHIP’s efforts have succeeded. Small groups have often failed, lacking quality leadership or critical mass. ‘Projectized’ women’s activities have frequently proved ineffective in empowering women in any long-term, comprehensive or meaningful way. Sometimes groups have been lured by large grants from other donors that have over-extended their ability to perform, not to mention their focus on empowerment. In some parts of India, the forces opposing change are simply too strong: a modicum of respect for law is a necessary prerequisite.

The bottom line is clear, however. For meaningful and sustainable development, it is critical that the vulnerable be able to protect themselves. The dependent must learn to be independent; the isolated must join in common struggle; and the fearful must gain confidence through joint action with others to defend their legal rights. Philanthropic institutions need to see and take account of this if they are to succeed.

John Sommer can be contacted at jsommer@together.net

This article draws from John G Sommer’s book Empowering the Oppressed (Sage Publishers, 2001) and subsequent research that gives detailed information and lessons from the experiences of groups referred to in this article.