The power of the Crowd

Even more than with the internet’s first incarnation in the mid-1990s, the emergence of ‘Web 2.0’ has led to fundamental changes in how we do just about everything. The ‘Crowd Web’ has helped to topple governments and consume companies. Now organizations of every kind find themselves consulting the Crowd in order to survive and remain relevant in this century of revolutions.

The Crowd is a powerful force in philanthropy, and can be even more so in the future if it is imaginatively embraced by forward-thinking philanthropists. Innovators in the fields of philanthropy and social entrepreneurship, such as Ashoka – with its ChangeMakers programme – are already making interesting and important changes to the way good is done. The programme has a platform where the crowd of social entrepreneurs can post and discover information about projects, engage in collaborative discussions to build valuable concepts, and then fund the best ideas, ‘Kickstarter’ style.

Similarly, in 2009-10, InnoCentive, GlobalGiving and the Rockefeller Foundation drew upon  the Crowd for help in major global water-related challenges. The result was the Global Giveback programme, divided into three phases, each representing one of the three major forms of Crowd participation: crowdsourcing ideas, crowdsourcing solutions and crowdfunding.

Crowdsourcing ideas
In the first phase, we asked people to identify issues that they cared about. In a way that was inconceivable 20 years ago, ideas were contributed from all over the world (including Bolivia, India and Uganda) – anyone with access to a computer was able to bring a local cause to the attention of three large, multinational organizations. The potential for connectivity is mind-blowing. We are finally able to ask people, ‘How do you want the world to be?’ or ‘What issues do you care about?’ and be in a position to act on their responses. It is a whole new paradigm of interaction.

In the case of the Global Giveback, we asked people to identify issues based on an additional criterion: those that can readily be turned into Challenges for InnoCentive’s global network base of over 275,000 problem-solvers to tackle. Ideas were selected on the basis of their applicability and potential for impact. With a broad base of sectors represented in our network, the programme was able to embrace many different ideas.

Crowdsourcing solutions
The Crowd can be used to find solutions to problems. We have been experimenting with engaging the Crowd through a simple but tremendously effective tool: prize competitions. InnoCentive designs ‘Challenges’ to generate new ideas and solve problems of all kinds, typically attracting hundreds (sometimes thousands) of participants by awarding cash prizes for winning solutions. Beyond a simple financial exchange, the awarding of a prize is a symbolic act. The prize becomes a focal point to engage the Crowd by invoking people’s competitive and inventive spirit. When there is $40,000 (in the case of the Global Giveback) or even $1 million at stake, people feel emboldened to engage with the problem, where before they didn’t think they had anything to offer. 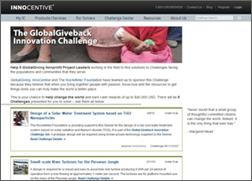 The results are tremendous: in the Global Giveback programme, for example, InnoCentive received 335 solution submissions from 2,200 registered participants from around the world. They were motivated to get involved both by the obvious importance of the problems and by the challenge and fun of participating. InnoCentive has now run more than 1,500 competitions, which have led to successful outcomes for commercial enterprises, public sector agencies and non-profit organizations. Concurrently, marketing programmes are run both to generate awareness of a particular cause and to attract and engage problem solvers. By abstracting the problem, InnoCentive levels the playing field, so that all that matters is the quality and inventiveness of ideas, not a solver’s background, experience or education.

But the results go beyond those figures. Through the Global Giveback, wider awareness was raised. Of the problem-solvers that were alerted to the challenges of water purification in Uganda and rainwater harvesting in Kerala, few had any idea of these issues before. The size of the prize fund – $160,000 in total – also helped to draw attention to the Challenge programme and to the associated issues. By creating ‘viral buzz’, InnoCentive’s Challenge programmes help to explore the most obscure and unlikely corners where solutions may be found. Prizes bring out the best in human curiosity and inventiveness.

Some charities and charitable foundations are already discovering the power of the Crowd. Our work with the Rockefeller Foundation, the Sam Schmidt Paralysis Foundation, BeyondPolio, Prize4Life, Scientists Without Borders and others is testament to the interest these organizations take in crowdsourcing work. There is a real opportunity to increase the power of every dollar spent, by looking beyond the financial value of this money to what it can represent for people.

Crowdfunding
The foundations that InnoCentive has been working with have also come to see the power of crowdfunding, the process whereby the Crowd, either spontaneously or through an organized mechanism, pools its money to support a given purpose. The internet has enabled the establishment of platforms for peer-to-peer funding, where individuals can access good causes and contribute small amounts. This has proved to be a great help for organizations around the world to reach funding goals, even when they have limited resources.

GlobalGiving, InnoCentive’s partner for the Global Giveback programme, is a leading internet-based network for peer-to-peer philanthropy. Its platform facilitates giving from anywhere to anyone, with the knowledge that the donation will be direct and little will be wasted on administrative costs.

This powerful partnership between a pioneer in crowdsourcing and a pioneer in crowdfunding helped to add value to the donors, and to the receivers of prizes, as well as allowing the programme itself to gain valuable support from other sources. When it came to funding the implementation of the prize winners in the final phase – this is where the help of GlobalGiving was crucial to the success of the programme – the Rockefeller Foundation match-funded every donation. This was a simple but effective way of capturing and acknowledging the interest shown by the Crowd in these projects. The match-funding initiative also helped to draw attention to the projects and to increase the amount of money received.

As with other transactions undertaken with the Crowd, crowdfunding is not just financial – it is symbolic. It demonstrates that people care about an issue. Before the advent of the Crowd as a significant global force, it was difficult to find a good gauge of people’s interest in a cause or issue. Now, with the help of GlobalGiving and similar platforms that help people access and fund projects on a peer-to-peer basis, we can better understand and quantify how much causes matter to people. When a cause attracts attention, perhaps through a Grand Challenge programme or more simply through YouTube hits, the internet provides a number of excellent channels to track this growing interest. When this information is available, big players start to listen. And very quickly the dollars contributed by individuals represent a powerful force in themselves, and lead the way to unlocking greater funding from governments, large corporations or high net worth individuals. The Crowd does not keep its interest in causes a secret; foundations would greatly benefit from being able to digest and fully use this (often easily available) information, and start to catch the tail-wind of large, popular movements for good causes.

The value of the Crowd to philanthropy is apparent at all levels of charitable work. The individual is able to influence their world with a financial gift – but the real change will come when organizations can understand these internet collectives, and how to engage and mobilize them to place their own stamp on the marketplace of good. That is, in understanding what motivates individuals, charities and foundations will be better placed to mobilize the Crowd and capture the benefits that come from having it on their side. 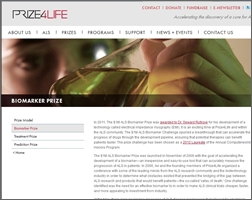 Prize4Life
Prize4Life, a charity seeking to find a cure for Lou Gehrig’s disease (a rare neurodegenerative disease that has received very little attention), put up more than $1 million to find a disease biomarker in order to reduce the cost of clinical trials. A number of discovery prizes were awarded to solvers, including a plant biologist and a dermatologist with no prior experience of working with the disease. Ultimately, the $1 million prize was awarded in early 2011 to Dr Seward Rutkove, a neurologist at Beth Israel Deaconess Medical Center, for his biomarker discovery.

Divining a vision for Markets for Good