The good, the bad and the unspeakable – corporate foundations gather in Switzerland 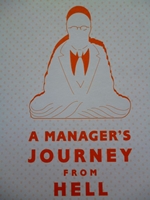 A Manager’s Journey From Hell makes for touching, and endearing, reading. It’s touching to see motivational literature for managers – and anyone questioning how income can turn into happiness – coming from Slovakia. Eastern bloc culture was not a breeding ground for either philanthropy or spiritual questioning, so the book has a fresh feeling to it.

Kiska witnessed the fall of the Berlin Wall and an influx of western managers telling Slovakians their country would soon be some kind of Switzerland, or better. Kiska was distrustful. He saw few chances for himself as a trained engineer, and left the country.

‘Hell’ is a recurring theme in the book, and it turns out to be very different things that appear somewhat disconnected at first, but do make sense upon a closer look. His grandmother had warned him of the ‘hell’ he would go to if he did not believe in God. This was of course not a workable guideline for the young and questioning Kiska, but in the end spirituality is the central ingredient in this book.

First, though, Kiska, had a pretty ‘hellish’ gastarbeiter (guest worker) stint in the US, and was duped in the end. Yet he managed to draw positive lessons from his experience of western capitalism: be ready to take risks and endure difficult times. He had a business idea and was successful: ‘Triangel’ buys consumer goods wholesale and delivers directly to customers, bypassing what Kiska sees as overpricing by the retail sector.

In short: Kiska sold his money-making business and went full-time into founding and running a national charity. ‘Dobry Anjel’ (good angel) provides monthly support to poor families stricken by cancer or other serious illnesses. Doctors select recipients; celebrities act as ambassadors; a website assures some degree of transparency; fundraising is directed at the general population; the model has grown strongly in Slovakia and is now being picked up in the Czech Republic.

Kiska emphasizes personal exposure to suffering, to find personal happiness. He makes friends with the families ‘his’ charity supports, goes to funerals, shares meals, sees (and features!) difficult and unsuccessful cases. He seems to see all of this as training for his heart capacities, and attributes his sense of fulfilment exactly to these heartful, and painful, experiences. He is a featured speaker and radiates the happiness his commitment to helping brings to him.

Some of his strategic advice to other managers who have philanthropic interests might be self-evident (start where you are; work with what you have; don’t be afraid to just start; use failures to try again; be prepared that not all of your friends will understand). And one feature of ‘Dobry Anjel’ goes against my sense of donor education: they sponsor all transaction costs externally, so that every cent fundraised can go to the families. That doesn’t really teach about investing in sustainable organizations. But maybe Slovakia is not there yet; possibly Slovak society needs such a door opener to develop local philanthropic practices.

But Kiska’s message can be for all of us. He writes with love of his small country, where he seems to know all regions and their problems. The charm of his tale goes beyond that location, however. It is endearing to see a self-identified business manager using the capacities of his heart, foremost, to orient his decisions. ‘Hell’, in the end, is the lack of such fulfilment. This is Kiska’s lived message, and quite a development over his grandmother’s simpler version of ‘hell’.

A Manager’s Journey From Hell Or How to Do Charity Work Successfully and From the Heart
Andrej Kiska published by Andrej Kiska, Poprad
ISBN 9788097082154