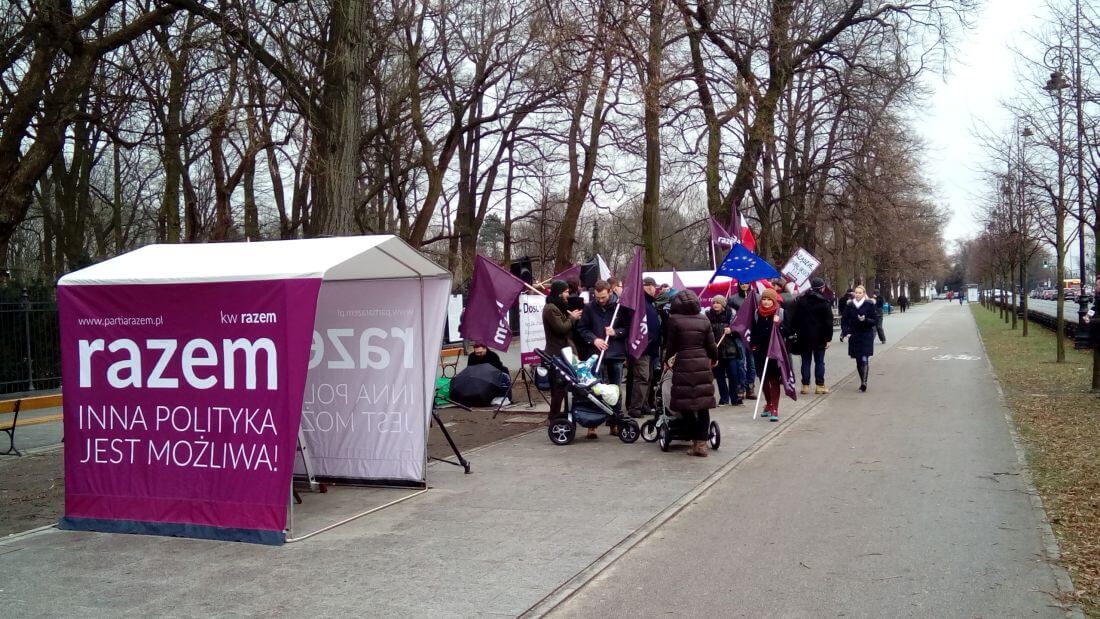 We have to be sincere, however. Central-Eastern Europe and the Balkans consists of twenty countries inhabited by a population of about one hundred eighty million people.

While the socio-political turmoil of the recent decade in Europe and beyond have resulted in the emergence of new political parties, confluences and platforms in the South and inspired leftists in the West to build new political agendas, the electoral successes in the East have been few and far between.

In Central-Eastern and the Balkans this progressive “wave” has translated into four seats on the Zagreb city council, six in the Slovenian National Assembly (for United Left platform – the ancestor of Levica) and an extra-parliamentary opposition party in Poland with an electoral performance of only 3,6 % in the most recent election.

Even after adding individual cases of progressive city mayors (like Robert Biedroń in Polish Slupsk) or single leftist politicians in some of Eastern Europe governing bodies, our optimism should not be completely blind. Against the background of radicalisation of nationalism, populism, and neoliberalism, there’s must be an urgency to move quickly towards encouraging progressive forces in the region.

Eastern European Chessboard
There’s no doubt we have to continue empowering Eastern progressive political parties, trade unions, and social movements – the traditional actors of the socio-political stage. That’s already taking place. Connections between parties from Poland, Slovenia, Croatia and their allies from the West and South are deepening. Eastern trade unions lively collaborate with their partners from all over Europe to blockade international chains of production and overcome national workers’ weaknesses in the globalised market.

The Polish Workers’ Initiative trade union, which I’m proudly a member of, contributes not only to black-red networks’ actions, but also to processes like Transnational Social Strike which gathers different types of workers’ organizations to struggle against precarious working conditions beyond national borders as well as to redefine the methodology of strikes performed by autonomous workers. Eastern, Southern, and Western social movements stand arm to arm in solidarity against global economic agreements, natural disasters, and attempts to limit reproductive rights in Europe. Both in the West and East, we also witness the renewal of sociological researches focused on characterising social classes.

Connecting political parties, trade unions and social movements beyond national borders as well as analysing our realities according to social differences are progressive strategies which we should never abandon. It’s our heritage, a matter of political efficiency which has been tested for almost two centuries, but also a matter of our identity and, thus, responsibility before future generations.

However, traditional methodologies seem to have failed in the East to support the advancement of socially oriented, democratic, progressive political forces. That’s because we have not recognised one significant actor which could both contribute to the progressive agenda building process in the East and transform political forces relations in the region – civil society organisations or the third sector, if you like. Progressives – especially in the West and South – should recognise the unprecedented role and the historic transformation of NGOs in the East, accept the Eastern third sector as a political partner, and urgently form alliances with progressive parts of civil society in Central-Eastern Europe and the Balkans.

A Lesson from Croatia
In March 2017, the eyes of the East focused on Croatia. Zagreb je NAŠ!, a municipal political platform that assembled progressive forces announced that it would run in the May 21st local elections .

The decision to stand for elections was made after 2014 and 2015 brought a successful electoral attack from the United Left in Slovenia and a partly successful appearance of urban movements in Polish local elections – as well as the creation a new Polish party, Razem. Now, it was Croatia where organizers hoped the next episode in the progressive Eastern wave would occur.

For two months, Zagreb experienced an unprecedented citizen oriented and grass-roots political campaign appealing right to the city’s principals. With 7,6 % of votes ZjN managed to occupy four seats in Zagreb City Assembly, twenty one seats in city districts and forty one seats in local councils. 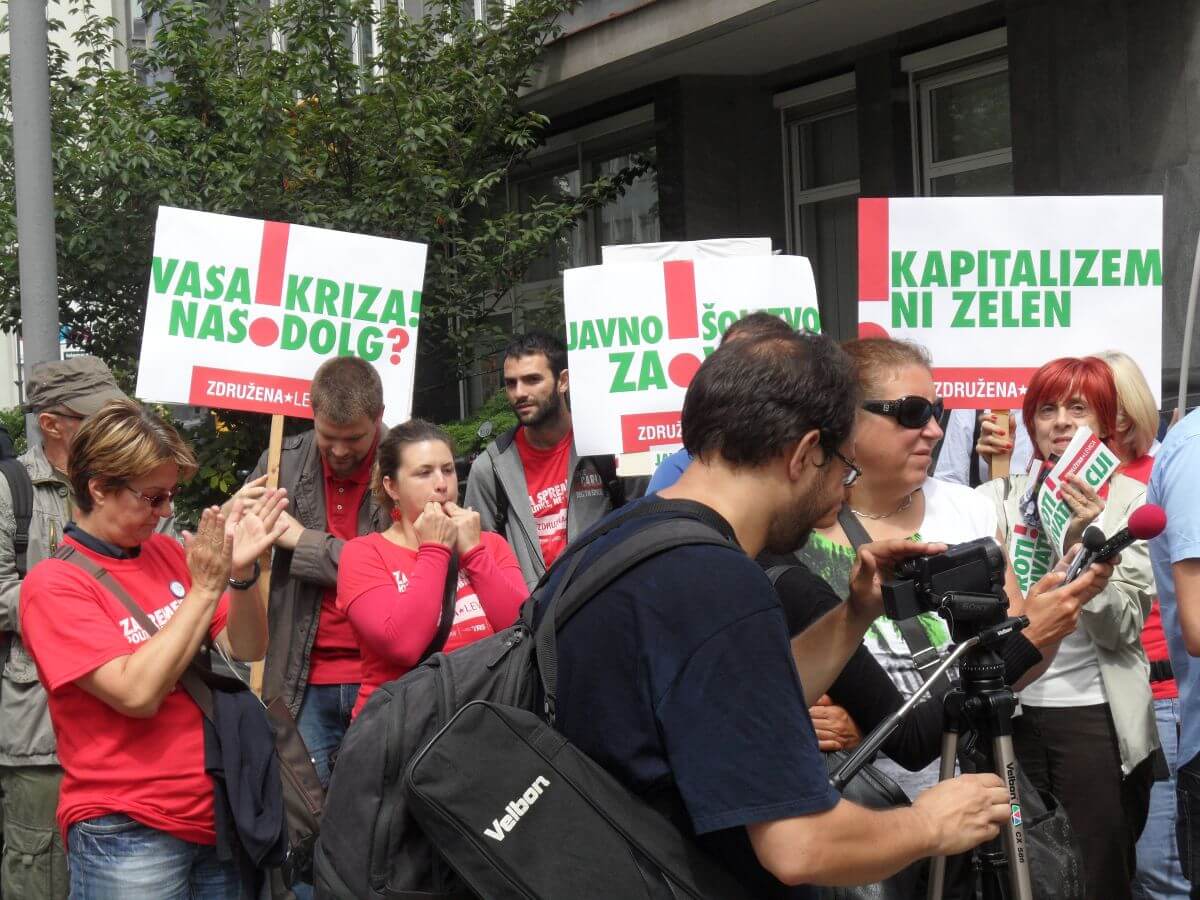 Although Zagreb je NAŠ! claimed their political approach and electoral actions were inspired by municipal platforms in Spain, there are significant differences between the city space offense in the South and in the Balkans.

Electoral success in Croatia did not come after social turmoil, mass mobilisations, or other struggles that had prepared the ground for progressive forces in the Spanish context.

Instead, victory was a consequence of the patient development of a leftist milieu in the country since at least 2007. And – it was not a newly developed type of movement-party based upon a confluence of social movements, engaged individuals and political platforms which structured itself into an electoral entity. Zagreb je NAŠ! developed directly out of the local NGO scene.

Croatia could be a perfect example for what we recognize as a transition from civil society to political society (or politicised society) in the last fifteen years in Central-Eastern Europe and the Balkans.

A lesson to learn from Croatian experience is that in the East, NGOs are the natural allies for strengthening the left.

Political Society – Polish Experience
To precisely track the stages of transition from civil society to political society in the East and further elaborate on its benefits to the progressive agenda, let me discuss the Polish experience. In Poland there are approximately one hundred thousand non-governmental organisations (associations, foundations and social economy actors) which compose the third sector between free market dynamics and the state.

The third sector in Poland – as in all Central-Eastern European countries and the Balkans – was established in early nineties, with the support of American funds, in a liberal – or even neoliberal, if you like – modus operandi. It was based on the principals of political neutrality , civic oriented activities, and social support, including charity. The third sector was stabilized in its liberal realm through development of state support mechanisms and – after 2004 accession to the European Union – through financial injection from transnational institutions.

However, simultaneously NGOs became spaces for critical thinking and political action. Almost all social movements of that era – feminist, environmental, or LGBT movements – grew out of the third sector organisations. This phenomenon was related to the lack of progressive political forces in Poland. While the post-communist party drifted towards Anthony Giddens-like “third way” policies mixing socially sensitive declarations with neo-liberal solutions, civil society was rushing  in the opposite direction – it, so to speak, performed the “reversed third way” abandoning liberal principals upon which it had been constructed and heading towards direct political engagement with the leftist spirit.

Some of the organizations launched in mid-two thousands, with Krytyka Polityczna as the most significant example, from their very beginning claimed political goals and implemented methodologies taken rather from the political than civil society space. After 2010, the politicisation of the third sector found its first electoral expressions. Urban movements which partly successfully competed local elections in 2014 originated from the third sector and were – in their majority – organised into civil society type entities.

2015 brought another crucial, from the progressive perspective, development within the civil society milieu. NGOs in Poland became the main arena for workers struggles against precarious conditions they’ve operated in so far.

Civil society thus not only recognized itself as a neoliberal machine, but pushed towards abandoning its market-like roots with a large number of the sector’s workers implementing socially oriented development instruments within organizations and in the third sector as the whole. In this particular moment a significant differentiation in civil society’s class composition was manifested.

While in nineties and early two thousands the third sector was occupied rather by middle class actors, since mid-two thousands and especially after 2010, the precariat began to dominate; transforming the sector into a potential class base for progressive politics and inculcating it with the socio-political practices of the leftist repertoire.

2015 however, will be remembered not because of labour movements in civil society, but because of a sudden acceleration of the transition from civil society to political society in Poland. Populists from Law and Justice party won elections. Far-right government addressed the necessity to support civil society organizations which popularize conservative values instead of progressive third sector mainstream.

First they attacked the dominant third sector organizations in the public sphere, then – they began cutting state funds for “incorrect” NGOs. After 2015, an expression “political society” began to refer to two phenomena – it described a process of politicisation of Polish society as a whole which manifested itself in mass mobilisations against far-right government, and it related to part of the third sector which openly declared disobedience against the central government. 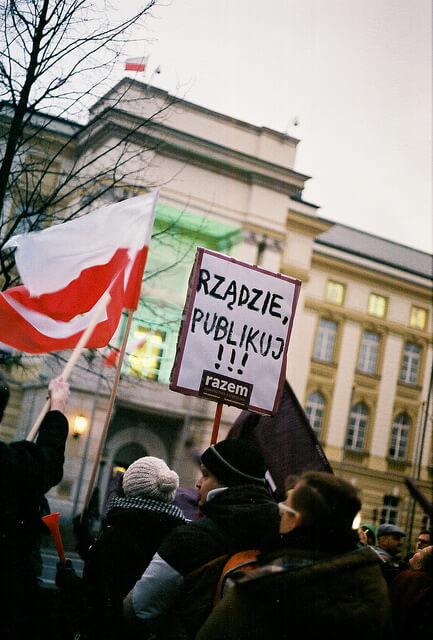 Having learned from the Hungarian experience where the third sector had been literally smashed by Viktor Orbán regime – Polish civil society environment immediately abandoned an apolitical approach and declared itself an opposition force. In 2016, the Citizens Fund was established – an autonomous fund which is supposed to provide sustainability for dissident NGOs.

Simultaneously ngo.pl portal – an online platform for information-sharing and knowledge-exchanging purposes within the civil society environment invited key figures of the sector to express their opinions on necessities for the civil society circuit to exercise political action.

Most of them stated clearly: civil society in its apolitical liberal realm is not enough anymore in the urgent situation where a far-right government attacks fundamental constitutional and human rights.

In 2017, the Polish government established the National Institute for Freedom which is supposed to regulate  civil society by distributing funds towards conservative groups and deserting dissident organizations. It’s needless to mention that the politicisation process had already been activated within right-wing civil society.

The pro-life movement is the clearest example. The far-right is politically benefiting from this fact in Poland, Hungary and everywhere else in Central-Eastern Europe and in the Balkans.

Rightist political society has become a fact, while on the centre and the left it’s becoming a reality in front of our eyes.

The Third Sector and the Left
Political society is a phenomenon which goes beyond any particular ideology. A Positive consequence of the transition from a civil society to a political one is that people transform themselves from consumers into activists. A society together with its grass-roots organizations becomes a protagonist of political action and change.

The Negative consequence is that not every part of the dissident third sector in Poland, to stick to this example, will empower progressive forces. Many entities and individuals will contribute to liberal and even neoliberal agendas.

Now is the time for progressive political parties, trade unions, and social movements to intervene in the third sector of the East. We must help to empower progressive tendencies within a mosaic of political actors into which the Eastern civil society environment will soon transform.

The third sector in Central-Eastern Europe and in the Balkans is a well organised network of people, groups, and institutions which is moving towards direct political engagement. It is a class base for progressive politics and is already inhabited by leftist practices related to social movements and trade unionism.

The Left in the West, in the South, but also in the East should recognise our historic momentum, and extend strategic partnerships to progressive parts of civil society. We have to focus immediately on creating  an electoral expression for this new pact in the nearest future.

Igor Stokfiszewski is a researcher, and activist and lectures at the Institute for Advanced Study in Warsaw, Poland.

This article originally appeared on the Political Critique website on 25 October 2017. The original article can be found here.