Though this book spans a long period – over 100 years – the concerns it highlights still ring disconcertingly true. What may be different is the confidence and the ambition: over the last century, there have been few rings into which the Carnegie Corporation of New York has not been prepared to throw its hat. 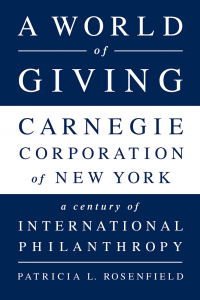 The story is also a sweep through changing American preoccupations and views of the world, embracing migration and assimilation in the aftermath of World War I, the cold war and race relations. It details some common, and enduring, grantmaking dilemmas – how to interpret the mission in response to a changing environment, when to stop funding, how to obtain reliable knowledge when the foundation has no physical presence in a region, how much risk to run. This is fascinating but it only tells us what the foundation chose to do, not what it chose not to do and why. For example, why did it give support during the Chinese revolution but not during the Russian revolution? The foundation’s work was infused with a belief in cultural internationalism and the pursuit of global understanding as a route to peace, but it did not support the League of Nations.

The book is full of gems. The foundation’s response to the convergence of polarized economic conditions and migration in the aftermath of World War I – The Study of the Methods of Americanization – illustrates both its ways of operating and its theories of change. When the foundation wanted something done it did not wait for a grantee with the smart idea – if necessary, it created its own organization or project. Creation of The Study of the Methods of Americanization also highlights the foundation’s faith in education as a major tool of social change. Another gem is the story of the Poor White Study of the late 1920s and its subsequent use by the architects of apartheid.

As might be expected over a span of 100 years, the story is full of anomalies and contradictions. The foundation, in many respects, pioneered collaboration especially with the Rockefeller and Ford Foundations, but there is next to no contact within the ‘family’ of Carnegie foundations until 2001. The foundation aims to influence political discussion but rarely seems to question the assumption that policy-making is a rational process and that, if you give policy-makers objective evidence they will make good decisions. Furthermore, and perhaps even more important, the foundation’s tendency, as Rosenfield notes, is to fund the creation of knowledge but to leave dissemination to the grantees. What’s more, despite its institutional continuity, the foundation’s failure to learn is one of the strands of her narrative.

This inevitably raises questions about why foundations change; unlike most other types of institution they do not need to so why do they? In Carnegie’s case, change seems to be driven by the trustees and the CEO/president, but can this be true more generally? It seems unlikely that there are only one or two sources, and if there are others, how much do we know about the process of negotiation over ideas/possible courses of action?

Rosenfield concludes by identifying four attributes of effective grantmaking: significance of mission; openness to risk taking; willingness to make long-term investments; openness to collaboration and partnership. Her concern is that these attributes are threatened by a growing cost-benefit approach which favours quantitative measurement of short-term results. ‘While some positive social change is likely to result from the use of such models and metrics,’ she believes, ‘the cost to the field of philanthropy is that it reduces the impetus for making long-term investments, for taking risks, and for entering into partnerships.’

Perhaps foundations would do well to remember the words of Henry Pritchett, corporation president in the early 1920s, who described the foundation as an agency equipped to ‘work with time’, making long-term and cumulative investments that might only properly be assessed a generation later.

About the book
Published by
Public Affairs
Price
$60
ISBN
9781610394291
To order
http://www.publicaffairsbooks.com

The Resilience Dividend: Being strong in a world where things go wrong – Judith Rodin