Duty of Care: The role of trusts and foundations in supporting voluntary organisations through difficult times 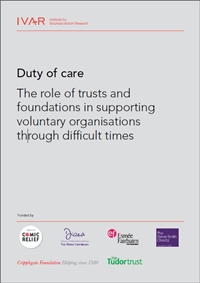 Do grantmakers have a duty of care to those they fund? The proposition put forward by the Institute for Voluntary Action Research (IVAR) in a report published at the end of 2012 is that they do.

The report looks at the practice of six foundations aiming for social change that wanted to understand the impact of their behaviour on their beneficiaries in the context of what is now being called ‘the Great Recession’, from what I heard during a recent trip to North America.

The beneficiaries IVAR spoke to, as you might expect, reported increased vulnerability since 2008, principally due to cuts in public spending, changes in public policy, increased demand from service users and growing competition for limited resources in a commissioning environment that is becoming increasingly tough for small and medium-sized organizations. The learning points IVAR identified for funders of such organizations are not a radical departure from the key components of what has become known as ‘Funder plus’: offering funding and in-kind support to build the capacity of organizations, streamlining application and monitoring processes to make them less burdensome, and actively collaborating with other funders. At a time of rapid change, IVAR also highlights the importance of offering core funding to organizations in order to allow them the internal space they need to think through their mission and approach. Without it, the report argues, organizations will falter or fall victim to the agendas of others, including funders, with the risk that they won’t be able to adapt to an environment that ultimately only they can make judgements about.

IVAR has been thinking about supporting funders to improve their practice for some time now. If it were possible to give a ‘lift pitch’ for their insights it might be, in words I’ve heard director Ben Cairns use: ‘How you do it matters.’ In other words, the quality of processes, systems and relationships created by funders affects not just the ‘customer experience’ of beneficiaries, but outcomes too. So far, so good.

What’s new in this report, however, is IVAR’s proposal that these elements of the relationship aren’t just optional extras, but instead that foundations have a ‘duty of care’ towards those whom they fund. That’s not just challenging. It’s controversial.

In the first place, and perhaps pedantically, there is in fact no direct legal duty of care for charity trustees towards their beneficiaries. In strict legal terms, charity trustees’ prime obligation is to their charitable aims.

But some might take issue with the concept even as a metaphor. For some funders, the primacy of mission requires trustees to take an instrumental approach to those whom they fund. On this view, beneficiaries’ organizational interests are subordinate to the mission of the funder. If an organization is struggling or failing, rather than trying to fix it, some might argue, a strategic funder should look to invest elsewhere to achieve maximum impact for their philanthropic pound.

That may be too strongly put. In any case, I don’t think any of the foundations IVAR worked with in this study would agree. While all are committed to achieving social change, my sense is that most opt for a more responsive approach to grantmaking which emphasizes their role as the supporters of social change activists rather than as primary instigators in their own right. In that context the notion of ‘duty of care’ helpfully articulates an understanding of the interdependent nature of the relationships between funders and their beneficiaries.

What IVAR doesn’t mean to imply – but what I fear some might assume from the title – is that in tough times foundations have a duty to support voluntary organizations as ends in themselves. With that in mind, I fear that the lack of a question mark against the title may have deterred some readers from engaging with the contents of a typically thoughtful report from IVAR. Funders are under pressure too just now, and at times of stress no one likes to feel they are being told what to do.

In fact what this report does is to articulate a simple truth and invite reflection. And this is it: whether you see your role as funder as being the initiator or supporter of change, you can achieve nothing whatsoever without the action of those whom you fund. Many well-run organizations are struggling for reasons not of their own making. This report shows that how you support them matters.

Richard Jenkins is author of The Governance and Financial Management of Endowed Charitable Foundations. Email mail@richardjenkinsconsulting.com

Duty of Care: The role of trusts and foundations in supporting voluntary organisations through difficult times
Institute for Voluntary Action Research Free download

Giving with Confidence: A guide to savvy philanthropy