No Such Thing as a Free Gift: The Gates Foundation and the price of philanthropy – Linsey McGoey

Advisers’ Perspectives – What is success for a philanthropy adviser?

Why might anyone think philanthropy was a bad thing? Linsey McGoey explains why with thoroughness, insight, flair, first-hand experience and an impressive range of arguments marshalled from fields as wide-ranging as anthropology, economics, history, sociology and political philosophy.

Her focus is on those contemporary entrepreneurs and philanthropists who believe that the ways in which they have made their wealth provide the key to righting the inequalities we see around us. Hence their emphasis on entrepreneurialism, market-based initiatives and outcomes bought for dollars invested. For today’s ‘TED heads’, capitalism isn’t the problem, it’s the solution.

The prime example she gives is Bill Gates and the Bill and Melinda Gates Foundation. 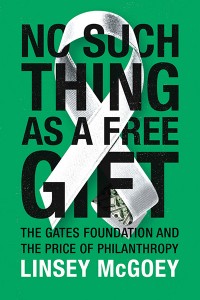 In essence McGoey’s argument boils down to this: that the wealthy might give their money away, but they haven’t given away their power. And that power extends both within the realm of their giving – so that money flows according to their ‘solutionist’ view of what nations and communities need – and beyond it, so that they continue to ‘devise the rules of national and global governance’.

In evidence, McGoey cites the influence and control the Gates exert over education policy in the US; in the realm of health, where a laser-like focus on eradication of single diseases takes attention and resources away from other more pressing problems; and the well-known criticisms of Gates’ investment policy. Outside the realm of philanthropy, McGoey examines Bill Gates’ continued belief in strong patent protection – key to Microsoft’s own success – and makes a link with the foundation’s ambivalent attitude to the production of generic versions of life-saving HIV drugs. Through McGoey’s eyes, the comparative vastness of Gates’ generosity casts a large shadow.

And it was ever thus, she argues. History shows that magnates like Ford, Rockefeller and Carnegie similarly believed that their perspective at the apex of the economy gave them unique insights into how the system can and should operate for the benefit of all. Social purpose went hand-in-hand with wealth creation, corporate protectionism and resistance to labour controls.

Philanthropy, then, isn’t really the problem for McGoey – it’s democracy, or rather the lack of it: that the wealthy are unaccountable and increasingly untrammelled in exerting their influence on our world. Their giving is only the tip of the iceberg. The solution therefore entails reform of an economic, social and political system that allows wealth and influence to accumulate to such a degree. Within the world of giving, however, she promotes the idea of free gifts ‘offered with a lack of self-involvement’ avoiding ‘chains of enduring dependency or obligation’.

Is indifference the answer? I don’t think so. At their best, foundations are the most transparent, intentional and efficient way of transforming private wealth into public benefit. Unlike most other types of funder, foundations can work independently of political timescales, free from short-term market cycles, and counter to received wisdoms, allowing them to respond creatively to immediate need as well as take a long-term approach. I know many foundations, philanthropists and families who exercise humility in the way they give, where the wealth they have increases rather than decreases social capital. In other words, rather than distance, you need attentive engagement with those you’re trying to help, free from self-interest. McGoey herself admits that the Gates continue to learn and admit their mistakes.

Are the wealthy damned if they do and damned if they don’t? Wherever you stand, and particularly if you’re a cheerleader for philanthropy, read this book. Wealthy or not, it’s only through becoming conscious of our shadow side that we can minimize the harm we do even while we think we’re doing our best.

Richard Jenkins is head of policy at the Association of Charitable Foundations. Email rjenkins@acf.org.uk 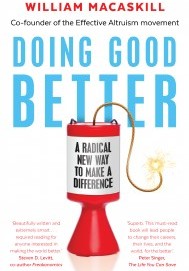