Taking leadership in Asia: Engaging with policy sector for impact

Pandemic – A time to demonstrate philanthropy at its best 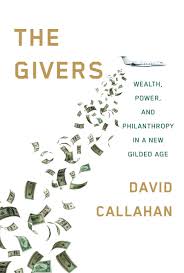 What are the consequences of surging philanthropic resources and ambition when public spending is falling and disillusion with democracy is growing? It’s interesting to contrast the US perspective on that question which David Callahan’s book gives, with the experience of an emerging economy like India.

In the US, The Givers sees ‘hyperagency’ – the confidence that accompanies great wealth, especially wealth acquired by solving wicked or vast problems – combining with the emotional rush that charitable giving provides, to produce a quest for game-changing ‘big bets’. This trend is increasingly apparent in India too, where it is easier to gain support from philanthropists for big, novel ideas than for incremental change and proven models. As Callahan points out, it’s not just that there is so much new philanthropic money but that it’s impatient, as billionaires get younger and seek to give while living. Again, the Indian experience echoes this. Asked recently about succession planning to his operating foundation, a major Indian philanthropist said he planned to focus all his resources on what could be accomplished in his lifetime.

But there are differences, too. In the US, these ‘super-citizens’ see the possibility of bypassing political oversight and democratic accountability and converting wealth into power in support of their causes of choice. In India, and other emerging economies, new wealth is still timid about taking on ‘political’ issues, putting its credence instead into building models that government will take to scale.

While civil society remains the conduit for many voices, a relatively small number of philanthropists is deciding which of those voices is loudest. The author quotes philanthropist Herb Sandler: ‘It’s all about betting big on the right people working the right leverage points with the right ideas.’ This finger on the scale is largely invisible as the media fail to scrutinise philanthropy with any degree of rigour and, since most of these campaigns are funded by tax-exempt funds from wealthy donors, US taxpayers are, in effect, subsidising the efforts of the wealthy to influence public policy. In India, until recently, activity of this kind was largely either funded by communities themselves or by international donors. As constraints on foreign sources have grown, many advocates for human rights, marginalised communities and environmental causes have had to scale back, repackage or abandon their efforts.

Callahan calls, among other things, for greater transparency, a narrower definition of charity for tax deductibility, introducing a mandatory payout rate for DAFs and raising that for foundations. While it’s hard to argue against increased philanthropic accountability, expanded regulatory oversight might be counter-productive in countries where governments are hostile to dissent, democratic rights and freedoms more generally. His advocacy of a stronger public sector and greater taxation might receive a chilly response both in the US and countries like India where both business and elites lean towards privatisation and a smaller role for the public sector.

Wherever you are, though, the book raises urgent questions. For countries like India, where adequate platforms for policy debate and norms for accountability are both absent, and who face growing inequality and polarisation, it should be read as a call to address those gaps in order to maintain democracies already under threat.