Asia Philanthropy Congress: a space to explore the future of the region’s giving amid rapid growth

A new space for philanthropy across Asia to gather – the first Asia Philanthropy Congress took place in Tokyo, Japan, on 19 November 2022 bringing together philanthropists, NGO leaders, practitioners, and others interested in what the future of Asian philanthropy looks like. 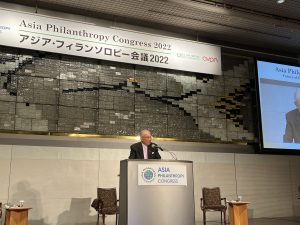 ‘Now looking at the world, we see such a strong growth in the economy of Asia – and at the same time, the population is also growing’, said Yohei Sasakawa, chairman of the Nippon Foundation and elder statesman of Japanese philanthropy, opening the public session of the Asia Philanthropy Congress to the attendees gathered.

‘The issues society are faced with are becoming more and more diverse’, Sasakawa said. ‘How can we collaborate with each other?’

Collaboration across the region and sectors

Two panels sought to answer this question in depth. The first – ‘The Future of Philanthropy and Social Innovation’ – convened leaders of Asian and global businesses, including AVPN CEO Naina Subberwal Batra from India, BRAC Chairperson Hossain Zillur Rahman from Bangladesh, Dutch business leader and former CEO of Unilever Paul Polman, India’s Jamshyd N Godrej who is the Chairman of the Board of Godrej & Boyce Manufacturing Company Limited, and Saskawa representing the Nippon Foundation and Japanese philanthropy.

Rahman, Polman, and Godrej shared how they brought principles of social innovation into their work in the business sector, offering a potential blueprint for others given a similar opportunity.

Batra, moderating the session, pushed on what was possible in the business setting: ‘All of us need to see what we can do to leave the world in a slightly better way than what we’ve found. You’ve come from a corporate background – unless and until we bring corporates into this discussion, we’re not going to be able to solve these problems.’

Polman, who spent his decade-long tenure at Unilever working to dully decouple the company’s business growth from its overall environmental footprint and increase its positive social impact through the Unilever Sustainable Living Plan, said: ‘You can’t have this unlimited growth on this finite planet – and anything that you can’t do forever is by my definition unsustainable.’

Against conventional wisdom, while leading Unilever, Polman provided a return vastly superior to rivals and more than double that of the FSTE index.

‘The cost of not acting is becoming higher than the cost of acting’, he said, citing the figure that Covid has cost the West $17 trillion.

Godrej echoed this sentiment: ‘If companies cannot be both sustainable and innovative, they will disappear,’ he said.

Godrej is currently Chairman and Managing Director of Godrej & Boyce Manufacturing, a holding company with a diversified business with a presence across 10 industry sectors. Godrej himself led the group in the areas of home appliances, consumer durables, office equipment, industrial products, and consumer products and services.

On the journey to bringing more social innovation into the $1.5 billion company, Godrej shared that employees have been an important part of this journey.

‘Employees see this as a great motivating factor,’ he said, sharing that: ‘Today we have the second-largest footprint of rated green buildings in India. This is what’s required. This is what is the motivation.’

Rahman, the economist and social thinker who sits at the head of the BRAC board, shared about the experience of BRAC as the Bangladesh international development organisation. BRAC is a microfinance company that provides on-the-ground access to funding for small enterprises, women, migrant households, agriculture, savings, and job holders. To date, BRAC estimates that it has impacted 8 million clients through $4.5 billion disbursed. It states that 87 per cent of its clients served are women.

BRAC as a movement originated alongside the growth on civil society in the region, Rahman said. ‘It started as an intention after the 1970 cyclone and flood… It has grown organically in terms of agenda, but also in terms of partnership,’ he said.

‘My advice here is to prioritise sustainability and access,’ Rahman said.

Sasakawa offered a final piece of advice to attendees gathered at the first session: ‘You have to be determined to do your mission responsibly.’

The second session of the afternoon explored ‘Forging philanthropy-business partnership towards diverse, equitable, and inclusive society.’ It brought together Caroline Casey, founder of The Valuable 500, who facilitated a panel including Hiroki Fujimoto, Senior Executive Officer and General Manger of Next Business Planning Department and SUMISEI INNIVATION FUND Business Co-Creation Manager from Japan; Lilibeth Aristorenas, Executive Director of the Unilab Foundation in the Phillippines; Satoshi Sato, Executive Director of the Special Committee on Parallel Reporting of the Japan Disability Forum; and Yosuke Ishikawa, Program Director of the Social Inclusion Team, Global Issues Department at the Nippon Foundation.

The Valuable 500 is a global business collective made up of 500 CEOs and their companies innovating together for disability inclusion. Casey, who is from Ireland, founded the organisation in 2017 to commit to building a global movement on inclusive business for the 1.5 billion people in the world with a disability. According to Casey, the spending power of that group is $13 trillion.

‘We want to have an integrated approach to stop people with disabilities from being seen as charitable only,’ said Sato, who works on the Special Committee on Parallel Reporting at the Japan Disability Forum.

Aristorenas – who’s organisation the Unilab Foundation is focused on long-term, transformation impact on the areas of mental health and wellbeing – said, ‘We have a lot of disability in places of high leadership, but it’s not talked about.’

To do this connecting work, ‘we must build ambassadors.’ Aristorenas said.

The afternoon sessions of the Asia Philanthropy Congress came after a closed summit in the morning that convened leaders of philanthropy from across the region. These leaders explored the role and future of philanthropy in social innovation, focusing on what it means to have a pan-Asian space and identity given the vast region and diversity of the population. The summit also discussed what is necessary for the philanthropy leaders of the next generation to steward the sector as the world falls into increasingly complex crises.

Japan at the vanguard 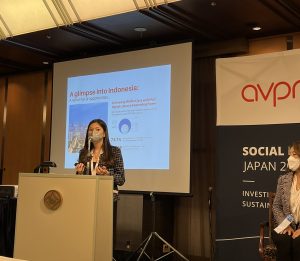 The Asia Philanthropy Congress took place a day after a Social Investment Forum organised by the Asian Venture Philanthropy Network – a different pan-Asian organisation that has been offering a space for cross-regional collaboration for over a decade at its annual conference.

‘Asia is fast becoming the world’s epicentre,’ said Batra, CEO of AVPN at the start of the Friday, 18 November gathering.

Speaking in Tokyo, she highlighted the importance of the setting, saying: ‘Japan has emerged on a leader on social investment and ESG. It is the first country to establish a global steering group.’

Japan can ‘lay out the pathway for Asian solutions to global problems’, Batra said.

Later in the day, the Singapore-based Temasek Foundation offered another example of what cross-border collaboration can look like. Temasek recently committed $200 million for an Asian philanthropy alliance which will aim to catalyse collective action for a better world and prime Asia as a force for the greater good.

Speaking about the potential, Temasek CEO Ng Boon Heong said: ‘If Asia grows, the world will grow with Asia.’