Applying the lessons of Ebola to Covid

#ShiftThePower: A movement not an industry

Facilitate development from below and from within: Seven practice-based recommendations for philanthropists

Is capacity strengthening support the missing piece in grantmaking? Part I

To grassroots non-profit organisations ‘neutrality paradox’ is a double-edged sword!

The devastating Ebola outbreak of 2014 taught us a great deal, but donors still need to maintain their commitments if the human cost of future health crises is to be kept as low as possible 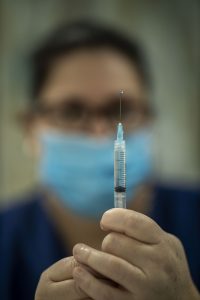 ‘After all, infectious diseases don’t respect borders and pose a global threat to international trade and travel.’ Photo: University of Queensland

No one would deny that the challenge to end this Covid-19 pandemic is considerable. Yet, when I think about the future, I’m optimistic. The speed and scale of the research response to date has been remarkable and it was made possible only because of progress and global collaboration on epidemic preparedness. The global response to the west African Ebola epidemic, more than six years ago, was the turning point.

In 2014, the task facing Guinea, Liberia, Sierra Leone was mammoth. Each had very limited health infrastructures, dealing with a fast-growing outbreak and the number of cases rising constantly. Ebola is by no means a new disease, but there was limited vaccine research underway and for the most part, it had suffered from a lack of global will to invest further. The scale of the tragedy unfolding in 2014 prompted Wellcome and others to push for a different, more urgent response, bringing global researchers, governments, NGOs, industry and funders together.

The question was asked: what if we put research at the heart of the response? What if we ran clinical trials of a new vaccine in the midst of an epidemic? Vaccine development, and the clinical trials to test them, are astronomically costly and can take decades. The only time we can assess a new vaccine is within an active outbreak, but Ebola vaccine candidates had never been humans before. The case was made to richer nations that tackling this outbreak would require all of our scientific effort. After all, infectious diseases don’t respect borders and pose a global threat to international trade and travel.

When Ebola returned to the Democratic Republic of Congo in 2018, local health systems were already better prepared. Licensed approval for two vaccines has been gained in little over five years, an astonishing achievement.

There was huge will from all involved, from Wellcome’s £10 million in fast-tracked grants, to surveillance systems set up by the World Health Organization and Gavi, the Vaccine Alliance, as well as an incredible and determined commitment from all health responders in the affected countries, in some of the world’s most challenging settings. The pharmaceutical company Merck played a pivotal role, investing considerable resource, with no expectation of a return.

Eventually this became the deadliest Ebola epidemic in history, leading to more than 11,000 deaths. The global response had averted many more deaths and made rapid advances. But it was clear we needed a more sustainable strategy to ensure the world is better prepared for threats from emerging infectious diseases.

After the outbreak
In 2016, the Coalition for Epidemic Preparedness Innovations (CEPI) was founded and formally launched at the World Economic Forum in Davos 2017 by Wellcome, the Gates Foundation and the governments of Norway, Germany and Japan.

Aiming to fill the financing mechanism gap directly, and designed to develop vaccines to stop future epidemics, CEPI’s work in the last four years has been far-reaching. It has accelerated research into emerging infectious diseases, such as Lassa fever and Chikungunya that afflict low- and middle-income countries. 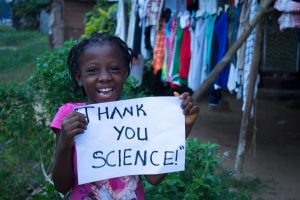 Thank you from Liberia during the 2014-16 Ebola epidemic. Credit: Alphanso Appleton

Six years on from the beginning of the 2014-16 Ebola epidemic, we see the fruit of that collaboration to accelerate research. When Ebola returned to the Democratic Republic of Congo (DRC) in 2018, local health systems were already better prepared. Licensed approval for two vaccines has been gained in little over five years, an astonishing achievement. Thanks to an incredible effort by local healthcare workers, more than a quarter of a million people have since been protected by Ebola vaccination in the DRC.

From the very start of this year, the Covid-19 pandemic has highlighted the value of epidemic preparedness. As a result of previous investments, CEPI has been central to the research response from the very outset, pivoting its existing ‘Disease X’ programmes and work on MERS-CoV to Covid-19, accelerating vaccine development.

Global support for the ACT-Accelerator has been growing but it still urgently needs an additional $35 billion to realise the goals of producing two billion vaccine doses, 245 million treatments and 500 million tests.

This response was so rapid in fact, that together with the US National Institute for Health, CEPI co-funded pharmaceutical company Moderna, which was able to enter Phase 1 trials – testing the safety of a new vaccine – just 63 days after the new coronavirus was first genetically sequenced. CEPI is now responsible for the funding of a total of nine vaccine candidates currently in late-stage clinical trials at the time of writing in October 2020.

The coronavirus pandemic has highlighted significant questions about the distribution of any successful vaccines and treatments. To address these, the Access to Covid-19 Tools (ACT)-Accelerator was launched in April, to unite international development and production of, and equitable access to, Covid-19 tests, treatments and vaccines. The vaccines pillar, COVAX, is convened by the WHO, CEPI and Gavi. Wellcome is working with Unitaid to lead the pillar for the development of and equitable access to treatments.

Global support for the ACT-Accelerator has been growing but it still urgently needs an additional $35 billion to realise the goals of producing two billion vaccine doses, 245 million treatments and 500 million tests.

To ensure we stay on the right path, there must be sustained investment and global collaboration. To bring this pandemic to an end as quickly as possible and prevent future tragedies on this scale again, we must invest in our future now.

Dr Charlie Weller is head of Vaccines at the Wellcome Trust.