Giving in India: are you wasting your money?

Founded in 2003, the Dalit Foundation was born out of an imperative need for institutional support for activists and organizations involved in the Dalit communities’ struggle for equality. Its establishment followed the World Conference against Racism, Racial Discrimination, Xenophobia, and Related Intolerance in Durban in 2001, which acknowledged that the Dalit situation in India fell in the realm of racial discrimination. It also fuelled realization by activists, researchers and civil society organizations that concentrated support was needed for Dalit initiatives. The central characteristic of the Dalit Foundation is thus that its strategies are rooted in initiatives emerging within the Dalit movement.

Why start another fund? The Dalit Foundation is not just a fund but a partner in the struggle to eliminate caste discrimination and ensure equality. It is a fund that looks beyond projects and instead supports leaders from the Dalit and other marginalized communities in South Asia.

As a partner rather than a funder, its strategies stem from initiatives emerging within the Dalit movement. The profound understanding of Dalit issues that permits such a bold ambition comes from the board of trustees, who bring to the Dalit Foundation a vast store of knowledge and experience.

First and foremost, the foundation seeks to strengthen the Dalit movement by promoting exemplary Dalit leadership through grants and fellowships to small grassroots initiatives. Before the advent of the Dalit Foundation, Dalit activists were encouraged to be community workers rather than community leaders. Ashish Rajhans, a young man from Bolangir, Orissa is a striking example of this new direction. Previously employed by a not-for-profit organization, with the support of the Dalit Foundation Ashish was finally able to shape his own leadership mission, spreading awareness about Dalit rights and helping the community to access them. Today, volunteers from the community help him to run three centres in the Bolangir district to disseminate information on Dalit rights and welfare schemes.

Capacity-building training gives foundation partners additional opportunities to strengthen their leadership potential, sharpen their perspective and develop their skills. Peer learning, self-reflection and the value of equality are core aspects of perspective building, with the stress on gender equality and subcaste integration among the Dalits. The workshops, which are spread over the three-year support period, prepare partners to independently address issues of equality and social justice, stop atrocities against Dalits, and proceed towards their objectives undeterred.

Leadership among the most marginalized

Bhaggulal Balmiki, a middle-aged man belonging to the community of manual scavengers from Uttar Pradesh, has suffered and fought ‘untouchability’ and other forms of discrimination all his life. With support from the Dalit Foundation, he has been able to address the issue of manual scavenging in his area. He is working to stop the practice in 37 villages of the Jaloun district and has already helped 50 families, including his own, to escape from the degrading occupation.

Sandhya Devi represents a forceful voice of Dalit women. Land is the key commodity and source of all power in India, and Dalits have less access to land in rural India than any other group. Ownership by Dalit women is almost negligible, automatically placing them at the losing end of all power relations. Sandhya has been working for land rights for Dalit women in Kalahandi, Orissa. Despite the size of the task she faces, she led 7,000 Dalits from village to village for ten days in 2005, campaigning for women’s land rights. More than 1,500 applications were filed and 680 women were able to acquire plots of land.

The foundation realized that Dalit youth and Dalit professionals are the key to tomorrow and need to be active participants in the Dalit movement. Fellowship programmes were thus initiated, with two objectives. The first was to encourage and enable young Dalits to become leaders of the community and provide strategic support to grassroots initiatives. The second was to create awareness about Dalit issues among professionals and a support system for Dalit students in professional fields such as medicine, law and engineering. 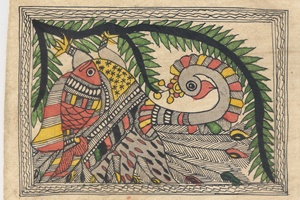 Understanding that historically Dalits have been associated with a culture of oppression and negativity, the Dalit Foundation wanted to support the emergence of cultural expressions that help create an identity of a proud, united and self-conscious community. Godna art is a remarkable example. A style of painting evolved by Dusadh (a Dalit community) women in Mithila, Bihar, inspired by their oral, cosmological and aesthetic traditions, the Godna style has become the most popular style used by Dusadh artists in adapting their tattoo art to paper. Over the past three years, the Dalit Foundation has identified and supported a number of Godna artists, including the late Chano Devi who received a Ministry of Textiles and Handicrafts award in 2008 for her work.

Caste and its discriminatory manifestations are deeply embedded in Indian society. The foundation’s mission thus cannot be accomplished in isolation. The mindset of the entire Indian society has to change. Understanding this, the Dalit Foundation has paid special attention to creating understanding and a favourable public opinion about the Dalit situation and the Dalit movement. The volunteers and interns who have come to the foundation have played a pivotal role in achieving this objective, serving as ambassadors for the Dalit cause.

What lies at the heart of our strategies?

The central tenet of the Dalit Foundation is that ‘Dalit’ means anyone who believes in and practices equality, and it is this belief that drives it. The project selection process, a key link in the process of grantmaking, is the first test of equality. It involves an open three-day interaction between all participants, a learning event for everyone including the foundation. Also part of the selection process is a mandatory three-day visit to the area the applicant works in so that the evaluator lives with the applicant and sees for himself or herself the work and implementation of the practice of equality.

While the initiatives from the community themselves continue to shape the Dalit Foundation’s evolving grantmaking strategy, the full realization of the mission requires a prolonged and committed struggle for equality. The stress of the grantmaking strategy is thus on transformation from within, the individual first and then society. Begin your transformation by asking one simple question: are you Dalit? That is, do you believe in and practise equality? Do you believe in social change?

Santosh Samal is executive director of the Dalit Foundation and Chandrika Sahai is a development consultant. Emails santosh412001@yahoo.com and chandrikasahai@gmail.com

‘Dalit’ is a title the so-called lower castes of India use to describe themselves. The caste system divides Indian society into groups ranked by ritual status determined by birth and governed by the principles of ritual purity and pollution. Each caste is associated with a traditional occupation. The castes defined now as ‘Dalits’ are at the lowest rung of this ladder and are obliged to undertake the most degrading of occupations, such as manual scavenging – the removal of human excreta with a rudimentary broom and pan. These castes are considered so ‘impure’ that even their touch is defiling and they are subjected to the most extreme manifestation of caste discrimination, ‘untouchability’. While the practice of ‘untouchability’ has been constitutionally abolished, it is still rampant in many parts of India and Dalits continue to suffer routine exploitation and humiliation at the hands of the dominant castes.

Traditionally associated with Hinduism, caste has now become intrinsic to Indian society; it is no longer just a religious phenomenon but a social one too. Dalit communities have as a result been systemically pushed to the margins of society. Not only have poverty and deprivation followed as the inevitable result, but the lives of Dalits have been stripped of dignity too.

The Dalit movement manifests the resilience of the Dalit community and their resistance to caste oppression.