Who is investing in the decentralized energy sector in Bihar and who could be investing here? I’ve tried to answer this by mapping the funding ecosystem based on stakeholders that we know. The stakeholders shown in green (see diagram) are those who are either currently invested in a business or programme that is providing access to energy in Bihar (either with commercial risk capital or with grant funding) or are helping to enable investment in the state (‘Enabling Ecosystem Stakeholders’).

The map reveals two fundamental market gaps that we believe are restricting growth of the sector. First, as mentioned by a number of contributors to this special feature, there are very few providers of funding for the seed stage of the funding cycle. A severe shortage of risk capital therefore exists to bring post-R&D but pre-revenue (pre proof-of-concept) enterprises to the stage where they can attract scale-up capital from existing impact investing funds and development finance institutions. There is ample capital available to invest in businesses that have already demonstrated proof of concept, especially in the rural energy sector. The problem for these impact investors is a lack of pipeline. Markets with large angel investor communities like the US don’t suffer as much from this gap, but for India (and Bihar in particular), it is a key constraint.

Second, few debt providers are prepared to lend without full collateral. This type of debt is usually required after an enterprise has already attracted an initial round of commercial funding. While this isn’t an issue specific to Bihar, the acute lack of debt providers in Bihar is striking, given the demand and the apparent interest among foreign investors to provide debt here. This means substantially reduced growth rates for enterprises operating in this space. India’s External Commercial Borrowings regulations are a barrier to foreign institutions wanting to provide debt directly, though there are untapped options to induce local financial institutions to lend.

The broader (and related) issue that is less visible in this map concerns the coordination between different types of funder. Husk Power Systems is a good example (see Why are they funding Husk Power? for details of funders to date). The business was founded using the promoters’ own capital and some small winnings from a business plan competition. Shell Foundation then injected two successive grants totalling US$440,000 over approximately 12 months, sufficient to prove its concept and attract a consortium of impact investors, including Acumen Fund, Oasis Fund, LGT Venture Philanthropy and DFJ; IFC came in as an investor six months later. This in turn was enough to scale up the business to a point where the promoters can raise a larger series A round of equity and debt financing later this year and scale up beyond Bihar. That consortium also unlocked an additional capacity-building grant from Shell Foundation. 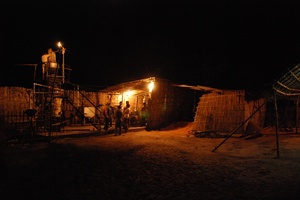 Husk Power (whose plant is pictured, working by night) has also received capital expenditure subsidies from the Ministry of New and Renewable Energy and a small unsecured loan from IntelleCash, which I will describe below. This case highlights the power of leveraging different funding types and their respective risk appetites successively to help scale up a business. As a group of investors we’re also working together to provide support beyond funding, which is equally necessary at this early stage.

This case is exceptional, though. The level of coordination between types of investor is generally low, and the concept of providing a grant to an enterprise with a shortlisted set of next-stage commercial investors pre-defined is still an exotic one. But the benefits of doing this could be considerable to both the investors and the entrepreneurs. Having a commercial investor involved at the grant stage (as part of a steering committee, for example) would help ensure the grant is genuinely used to provide sufficient proof of concept to attract that later stage investment, not to subsidize the product itself. The entrepreneur would benefit from greater clarity on milestones to be met before pitching to commercial investors, and the investor would benefit from an enhanced pipeline.

It would be great to experience a world where grant providers receive as many opportunities from later-stage commercial investors as they do from entrepreneurs directly. To help create that world, we are creating two financial intermediaries in India aimed at addressing the market gaps described above.

Pre-finance to bridge the ‘valley of death’

In the coming months, Shell Foundation will be launching a dedicated pre-finance facility (PreFin) that will provide low-cost capital and business development assistance to early-stage ‘pre-investable’ enterprises. This will act as a feeder to later-stage commercial investors. This business accelerator will help address the ‘valley of death’ between concept stage and commercial funding that plagues the social enterprise sector globally. It will focus initially on the energy and infrastructure sectors in India. We envisage 8 to 12 deals per year of between $100,000 and $300,000, providing an approximate 18-month runway ahead of a fundraising round.

To help address the lack of commercial debt financing to SMEs in India, in late 2010 we launched a credit facility in partnership with IntelleCash, an Indian non-banking finance company. It is providing debt (less than $250,000 per loan) tied to specific anticipated cash inflows. IntelleCash currently has a test portfolio of four companies, including Husk Power. It specifically targets small businesses that do not have three or more years of profitability or full collateral (so cannot be served by banks). Employing lessons learned from our partner GroFin (www.grofin.com) in Africa, we are aiming to create an independent business capable of attracting commercial funding to enable it to scale up.