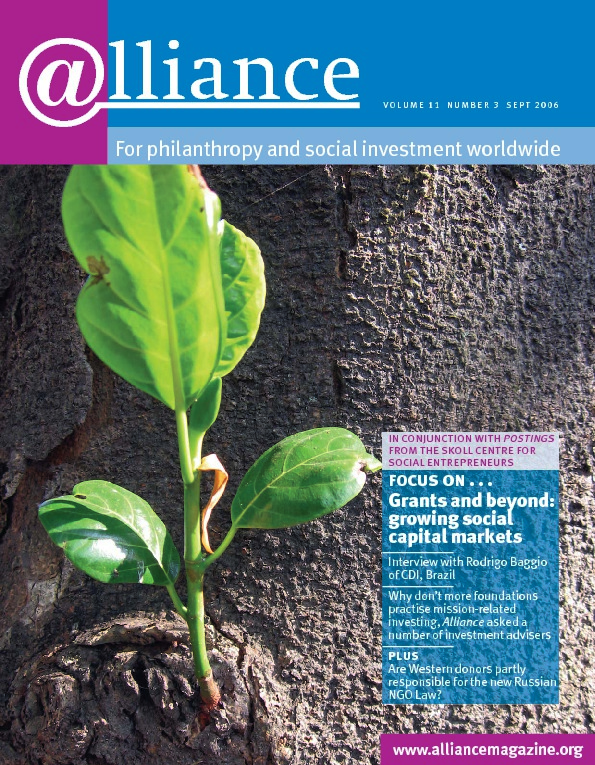 Corporate Social Responsibility and International Development: Is business the solution?

Mixed news on likely effects on corporate giving of recession

Learning from the farmer’s market

Over the last decade, the terms socially responsible investment and corporate social responsibility have become common currency, yet no one has fully translated them into practice. Mainstream SRI-oriented investors fail to see that genuinely implemented CSR might in the short term affect the earnings (or even the economic value in the medium term) of the companies in which they invest.

If business were creating more social value through its own processes and profit were shared in a more balanced way as it is generated, wouldn’t there be less need for it to be reallocated later through charities? Can we be creative enough (or naive enough, some would say) to invent hybrid value business models – that is, profit-generating, cause-centric business models?

Grameen Danone Foods is an attempt to do this. Based in Bangladesh, its aim is to ‘reduce poverty through the implementation of a community business model’, producing and delivering fortified nutritious yogurts to poor rural villages. Its features include ‘mini factories’, with deskilled tasks to maximize local employment; direct distribution in the villages, creating 1,500 jobs for each mini-factory; 500 microfinanced new milk farms for each factory; and fully biodegradable packaging.

While Grameen assesses the impact on the local community and on competitors, Global Alliance for Improved Nutrition (GAIN) will verify that the new venture is fulfilling its health mission. In order to ensure its replicability, the business must be cash flow sustainable in year two, and generate a return on capital exceeding its cost after year three. Most dividends will be ploughed back into the business. Generally, the Grameen ‘social business model’ is on a ‘no loss’ basis, but our experience convinced Muhammad Yunus to try the different, hybrid, model, since we believe that the profit element is key to its sustainability.

How did it come about?

Over the last ten years, Danone’s corporate mission has evolved into one of bringing ‘health through nutrition to the largest number of people possible’. As a result, it has revised its product range to focus on milk, water and cereals and it now has three business models globally, biologically tied by R&D, technology and marketing:

Grameen Danone is the latest example of the hybrid model. We are only at the very early stages, but we have about a dozen initiatives using the same approach starting around the world in the next year, in both developed and developing countries. We believe that hybrid models could provide an opportunity to broaden the traditional scope of charity financing and significantly advance social causes. They could open up ways for companies to sharpen their commitment to their social missions and modify their fundamental governance.

Serious SRI investors could find publicly listed hybrid companies a real option in their investment choices; foundations could find ways to reconcile their investment and donation activities; and socially and environmentally conscious individual shareholders, consumers and citizens might find it a way to directly and profitably contribute to causes they would like to support.