Michael Donoghue writes in this issue that Pacific Islanders are responsible for only a tiny fraction of GHG emissions, yet they are suffering the worst effects of global warming. This unjust situation should be at the heart of the climate debate but was overshadowed in Paris by the much-acclaimed progress made elsewhere. We would question how much progress can truly be made without a commitment to climate justice. Climate justice demands action from those who are contributing most to climate change and benefiting from resource depletion: developed countries and multinational corporations. This is the area that is crying out for philanthropic action predicated not on charity but directed towards systemic change.

The mindset required for action can be summed up in three words: conviction, compassion and commitment. By conviction we mean full agreement that global warming is happening and that it is primarily the result of human activity. By compassion we mean empathy with and care for the victims, to date mostly in the Global South. That conviction and compassion combine to require commitment to do something about the situation; to put our resources where our hearts are and curtail the toll being taken on the planet.

Is the Paris Agreement a turning point?
The Paris Agreement has been hailed as a turning point in global efforts to avoid catastrophic climate change. Nearly all countries, polluters and non-polluters, rich and poor, have for the first time agreed to do something about global warming. So at least there is conviction, but the value of conviction without action is limited. Will mere acknowledgement that climate change is urgent and that temperature increases above pre-industrial levels must be kept to 1.5 °C, or well below 2 °C, be enough to save life as we know it on the planet?

‘The key concepts of justice, including common but differentiated responsibility, have barely survived on life support provided by the preamble to the Paris Agreement.’

Key concepts of justice missing
The key concepts of justice, including common but differentiated responsibility, have barely survived on life support provided by the preamble to the Paris Agreement. This is an opportunity for philanthropy to back the countless groups such as Corporate Europe Observatory, Friends of the Earth International and Third World Network advocating that northern nations increase their level of ambition in line with the requirements of common but differentiated responsibility. Apart from the lack of attention to climate justice, there are two big omissions from the agreement. First, as La Via Campesina, the international peasants’ movement, puts it (and as other articles in this issue have pointed out), ‘there is nothing binding for states, national contributions lead us towards a global warming of over 3 °C and multinationals are the main beneficiaries. It was essentially a media circus.’ 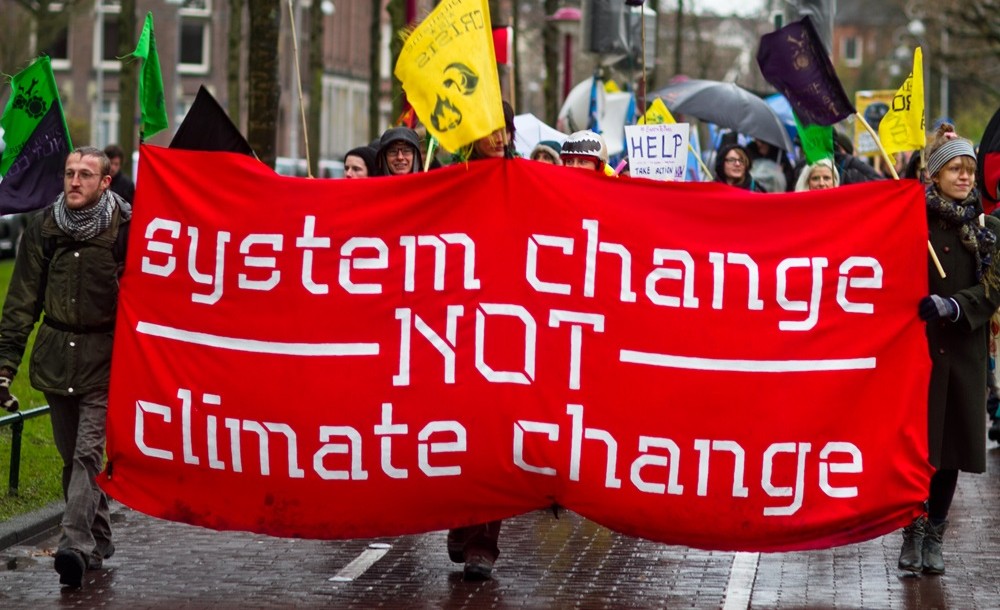 ‘The agreement made no mention of fossil fuels, the great culprit in the unfolding climate crisis.’

The influence of the fossil fuel lobby was made most apparent at the Warsaw COP in 2013 when there was an official coal conference during the negotiations. It is estimated that the only way to keep temperature rises to 1.5 °C above pre-industrial levels is to stop burning fossil fuels by 2030. Philanthropy can and should fund the groups and coalitions organizing and advocating for alternatives, while at the same time divesting its own endowments from fossil fuels. Some have already set the example, as shown by Ellen Dorsey, Sian Ferguson and Clara Vondrich and a recent Alliance interview with Stephen Heintz of Rockefeller Brothers Fund. But as 350.org leaders May Boeve and Bill McKibben also write, ‘[Big] philanthropy is not sufficiently involved. Many foundations, including some of the largest environmental funders, have not divested from fossil fuels.’

Need for funding for adaptation as well as mitigation
Wanjira Mathai and Sean DeWitt point to another area in need of philanthropic attention: grassroots movements fighting to preserve local ecosystems embodied in forests. While the Paris Agreement highlights carbon markets and the embedded carbon offsets, forest communities, especially those of indigenous peoples, see their trees and soils as arenas of life and culture and not as carbon sinks. Tackling global warming at the grassroots level means supporting groups fighting for their way of life and their culture. These fights provide opportunities for compassion which lead resolutely to commitment. Commitment demands action now, not simple intention. It requires philanthropy to fund adaptation on the scale that it has been funding the search for mitigation.

‘Tackling global warming at the grassroots level means supporting groups fighting for their way of life and their culture.’

There are areas where justice has a still more obvious application. Nations have considered climate change to be a national security issue and their obstinate dependence on dirty energy has led to a form of climate warfare against protesters. While nations continue to see their interests tied up in big dams and fossil-dependent power generation, these sites have become the focus of protests. In some cases, protesters have become the targets of violence.

‘Under Kyoto, the emissions reduction plan was based on the reduction in emissions that was actually needed. Under the INDCs, national interests determine what actions should be taken.’

Emissions reductions determined by national interests
The linchpin of COP21was the so-called Intended Nationally Determined Contributions (INDCs). The INDC platform was set by COP19 in Warsaw. As the name implies, nations were required to submit the level of emissions reduction they would contribute towards limiting temperature increases above pre-industrial levels. The key attraction was that countries would set their own targets, in contrast to the Kyoto Protocol which required that countries reduce emissions in line with a global assessment of contributions, abilities and historical responsibility. In other words, under Kyoto, the emissions reduction plan was based on the reduction in emissions that was actually needed. Under the INDCs, national interests determine what actions should be taken. Analysts at the UN Environment Programme (UNEP) indicate that with the INDCs the world is set for a 3-4 °C temperature increase at the minimum, which would mean irreversible loss of lives, species and habitats, territories and citizenship due to climate change.

Catastrophe pending
This sort of temperature increase would make Africa, for example, uninhabitable because the continent would suffer temperatures 50 per cent above global averages. Temperatures in the range of 4.5-6 °C would mean incineration of the continent, heatwaves, floods, catastrophic droughts and crop failures, among other calamities. Island communities and coastal regions would disappear under water. Maxine Burkett notes in her article, ‘in earth’s documented history, we have not seen the amount of carbon released combined with the speed at which we are depositing it in the atmosphere.’ As she suggests, climate-induced migration will need to be a funding priority of foundations. More starkly, Pablo Solon, former chief climate negotiator for Bolivia, remarked: ‘The Paris agreement will force us to choose [which] of our children will survive, because in a +3 °C world, not all will be able to live.’

‘Thousands of climate justice groups around the world are offering solutions from those most affected, including indigenous peoples, women and youth.’

How philanthropy can support climate justice
We have considered at length the reasons why the current climate negotiation pattern is leading us into more crises. The good news, however, is that grassroots communities are both innovative and resilient in the face of challenges. Thousands of climate justice groups around the world, including coalitions such as Climate Justice Now and the Grassroots Global Justice Alliance, are offering solutions from those most affected, including indigenous peoples, women and youth. They are being supported by funding from foundations including Rockefeller Brothers Fund and the Chorus, Kendeda, Oak and Overbrook Foundations, some of whose efforts are profiled in this issue.

We urge philanthropy to become more committed: to divest from fossil fuels and reinvest in renewable energy; to fund adaptive strategies developed at local and regional levels; to support people’s movements  putting pressure on world leaders; to make grants for the protests that will be erupting around the planet to shut down fossil fuel facilities; to fund alternatives such as wind and solar power; and, perhaps above all, to consider the issue of climate justice which should inform all our efforts to combat the various forms of climate change.