Democracy still a ‘work in progress’

If there is one region whose political landscape has dramatically changed in the last 20 years, it is Latin America. After several decades of dictatorships in many countries, the region is now engaged in strengthening the essential elements of representative democracy.

All the countries of Latin America have multi-party systems, with periodic, free and fair elections, based on secret balloting and universal suffrage – though in some countries weaknesses have been detected and denounced. As we look at the Latin American map, we see that a former union leader in Brazil, two women in Chile and Argentina – one of them a former political prisoner – an indigenous leader in Bolivia, a former guerrilla leader in Nicaragua and a former Catholic bishop in Paraguay have been elected as presidents.

Separation of powers and independence of the different branches of government are the rule in most countries, again with certain weaknesses, which the countries themselves are trying to address, often with the help of the international community. Political and civil rights are generally respected, but social, economic and cultural rights are not, and in this sense Latin America is still far from equitable.

International donors and the transition to democracy

Funding from democratic governments and progressive institutions in the North during the 1970s and 1980s was crucial in the recovery of democracy in the 1980s. Key civil society groups (see box) were supported by international donors, and their support made a very positive contribution, not only in financial terms but also in breaking the local and international isolation in which groups operated. Support for human rights groups, women’s groups, independent research centres and civic groups allowed them to have a voice, to exert pressure, and finally to contribute to the recuperation of formal democracy. Without citizen participation, strong community organizations, and volunteer participation in social organizations are all signs of a healthy democracy. Democracy is not complete without a strong and vibrant civil society.

However, over the last 20 years a great deal of funding has moved from supporting participatory mechanisms of citizen engagement to building and strengthening formal democratic institutions (electoral systems, judicial systems, etc). In fact, both formal democratic institutions and a deepening of democratization processes in the form of more citizen participation are needed. In many cases, funding for civil society organizations has been reshaped and now goes through governmental offices and special ‘windows’ managed by government departments or similar agencies. And, too often, Latin America has ceased to be a priority for international cooperation agencies, progressive foundations and development NGOs in the North.

Yet the work of democratization is not complete. The 1980s and 1990s marked a double transition for the region. In addition to embracing democracy, Latin America also installed a neoliberal economic model as part of the demands of a globalization process. The results have not always been fortunate and their adverse consequences have placed a strain on lively but still fragile democracies, which still harbour some authoritarian and non-inclusive tendencies.

In this complicated situation, with large sections of the population suffering from increasing poverty, civil society organizations face diverse challenges. In some countries and regions, government funding for CSOs has resulted in a kind of paralysis: it is not easy to criticize the source of 100 per cent of your income. In fact, some analysts claim that a process of cooption has taken place, with CSOs substituting many of the state’s responsibilities, especially in provision of social welfare services and areas such as health education and campaigns against domestic violence. In other countries, it seems the space for civil society is shrinking, with cases of persecution and discrimination and the introduction of legislation that may reduce the space for civil society organizations.

Yes, Latin America is more democratic than 20 years ago. But democracy still has a long way to go. All actors involved have considerable work ahead, and important responsibilities, and all must be accountable.

Anabel Cruz is Director of ICD (Instituto de Comunicación y Desarrollo) in Uruguay and Chair of the Board of CIVICUS. Email acruz@lasociedadcivil.org

Daniel Barragán – What democracy means to me.

Democracy goes beyond voting to elect our representatives to make decisions and govern – which is indeed what we do in our region. It implies involvement in public life while respecting the social order, the law, human rights and diversity. We need a more participatory and inclusive democracy, whereby citizens are responsible for the actions of their representatives and engage in public processes.

Over the past three decades civil society organizations have overcome great challenges to play a significant role in widening people’s rights to participate in the management of public affairs in Ecuador. Since the country joined others in the region in returning to democracy in the 1970s, civil society’s role in Ecuador has been to promote new mechanisms for citizens to exercise their rights. In particular, civil society groups secured significant progress by working through Ecuador’s Constituent Assembly as it wrote a new constitution and created a fresh political system based on participatory democracy.

The new constitution recognizes the importance of civil participation and transparency, assigning to the public ‘a leading role in decision making, planning and governance’ and ‘popular control of state institutions and society and their representatives, in a permanent process of citizen power construction’. By giving citizens opportunities to exercise better control of the government, this will also generate a deeper sense of ownership of public affairs. In this regard, CEDA is working on a capacity-building process to strengthen civil society leaders’ capacities and skills to participate and advocate in different spaces.

Most countries in Latin America endured some form of repressive regime in the 20th century. There were military regimes in Argentina from 1976 to 1983, in Uruguay from 1973 to 1985 and in Chile from 1973 to 1990. An estimated 30,000 people were killed by the junta that ruled Argentina and thousands of prisoners filled the prisons in the three countries. The military dictatorship in Brazil lasted for 21 years, ending in 1985; the dictatorship of the Somoza dynasty ruled Nicaragua for more than 40 years until 1980. Honduras was ruled by a military dictatorship from 1972 to 1980, and in El Salvador authoritarian governments employed political repression to maintain power from the 1930s to the 1970s. In the 1980s, the country endured a bloody civil war, that which ended with the Chapultepec Peace Accords in 1992. 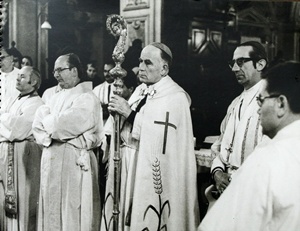 In Chile, following an initiative of the Bishop of Santiago, Raúl Silva Henríquez, the Solidarity Parish (Vicaría de la Solidarid) was founded in 1973 to give legal and social advice to the victims of human rights violations following the military coup of 11 September that year. Over 20 years, the Vicaría was one of few voices in Chilean society that denounced torture, violence and abuse of power and defended human rights. It advised more than 90,000 people a year and supported more than 5,000 judicial cases. The Vicaría was consistently harassed by the regime and many of its members suffered prison and exile, but thanks to its work, there were no missing persons in Chile after 1977 and the cases of torture decreased from that time. The Vicaría also brought cases to international human rights organizations and the United Nations. Throughout the two decades of its existence, foreign donors were a crucial source of support for the Vicaría: it received support from universities, international governmental organizations, UN agencies, bilateral donors including European governments, private foundations, and human rights NGOs from all over the world.


Servicio de Paz y Justicia, Uruguay and Argentina
The Servicio de Paz y Justicia (SERPAJ – Peace and Justice Service), created in 1974 by Adolfo Pérez Esquivel, who won the Nobel Prize in 1980,was instrumental in human rights and democracy promotion in Uruguay and Argentina and other countries. SERPAJ received support in its early years from bilateral donors and human rights organizations from various countries in the North. In Uruguay it was due to the efforts of SERPAJ that specific commitments were signed by the political parties regarding truth and justice, to be implemented by the first democratic governments to take office.
For more information
http://www.serpaj-ar.com.ar
http://www.serpaj.org.uy