From CEO to CNO: becoming networked is the key to success

Bruce Lesley is the president of an NGO in the US called First Focus, an organization dedicated to making children and families a priority in US policy and budget decisions. He has more than 20 years of public policy experience at all levels of government and a demonstrated commitment to making children’s lives better. He directs all aspects of policy development and internal operations. He also serves, informally, as the organization’s ‘Chief Networking Officer’, on social networks and offline.

Several years ago, when Lesley first heard about Twitter, he was sceptical. Today, it is one of his most valuable online networking tools, helping him leverage his organization’s and his professional networks to advocate for children’s issues. 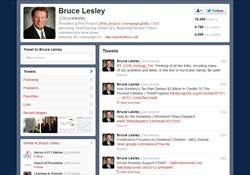 A quick look at his Twitter feed reveals that he engages in conversations with reporters and others working on children’s welfare issues, from healthcare to safety. His aim is to change the dialogue on children’s issues and get more child-friendly policies passed. He also curates information about children’s issues and shares resources and success stories with his network, which in turn includes a network of state-level children’s advocates who welcome the stream of content he sends them to share with their networks. He blogs about the issues and trends on Huffington Post.[1] Through the use of tools like Twitter, Linked In and Facebook, he identifies key networks that focus on healthcare and seeks to fill structural holes in his network by brokering connections.

Enter the chief networking officer
The way that Bruce Lesley is using networks to support his organization’s mission could be imagined as a whole new set of tasks or even a whole new position for NGOs and foundations – that of chief networking officer, or CNO. The job title and function was first defined by a corporate business coach called Octavio Pitaluga in a Wikipedia article for the for-profit sector as:

‘Chief Networking Officer is the corporate business networks portfolio manager… and map[s] out and organizes all resources available inside the network, i.e., contacts, experiences, success stories, knowledge, competences and business opportunities. Finally, they set up long-term partnerships with fair and well-defined mutually beneficial gains with each stakeholder inside all business networks.’

What would this position look like for an NGO or foundation? Are there NGOs or foundations that already have a full-time CNO? Not according to Meg Garlinghouse, head of social impact at Linked In: ‘I have not seen a dedicated, full-time staff position for chief networking officer at a non-profit,’ she says. ‘I think it would be the updated version of the chief development officer, and a testament of how valuable an organization’s network is to their mission – not just major donors, but future board members and skilled volunteers.’

Weavers and guardians
A CNO is not a ‘network weaver’. According to June Holley, who wrote the Network Weaver’s Handbook, network weavers are people who intentionally and informally – and often serendipitously – weave new and richer connections between and among people and groups in networks, and between networks.

The distinction between a network weaver and a CNO recently came up in a discussion in a Facebook group founded by Holley, where 321 people discuss the techniques and best practices of network weaving for NGOs and philanthropy. A network weaver is someone who does the actual work of building the network and facilitating the work of network members. The CNO, on the other hand, is responsible for the development of the networking strategy. In a smaller organization, these roles may be one job or part of the CEO’s or other senior management’s job. In larger organizations, the CNO might supervise a team of network weavers.

In the Network Weaver’s Handbook, Holley describes the activity as being a ‘network guardian’ and remarks: ‘The more I see NGOs and foundations use networks, the more I see the critical need for everyone in the organization to see themselves as network weavers, and a Chief Networking Officer would help set up the peer learning for this to happen. My only issue is with the title, which sounds so in line with hierarchy rather than the peerness of networks. Maybe Network Catalyst?’

Seth Cohen, director of network initiatives for the Charles and Lynn Schusterman Foundation, says that his job incorporates the roles and functions of both. ‘I often describe our work as “identifying, connecting, supporting and creating networks of young adults that want to change the Jewish world, or change the world Jewishly”. There is a lot to unpack in that description, and the functions of our work in the foundation have evolved to match it, including grantmaking, programmatic initiatives and insight sharing.’ Cohen describes the CNO as a ‘sort of a network-weaver-in-chief, but one that uses the strategic resources of her/his organization to help leverage networks as a tool for impact. The network initiatives team should follow a 70-20-10 rule, spending a core amount of time – 70 per cent – on building, nurturing and connecting core networks, 20 per cent on expansion of those core initiatives and then 10 per cent exploring frontier ideas such as cross-scale networks.’

What does a CNO look like?
What exactly would go into a job description for a CNO? A list of skills would probably include:

Smaller organizations would be unlikely to have an entire position for this, but might look at how to incorporate the skills and mindset into existing jobs.

Creating a network mindset
It is important to understand that networking, especially at an NGO, should be part of everyone’s job. Having a Facebook brand presence or tweeting as the CEO is not enough. It requires a total redesign of the organization and it begins with developing a network mindset. Networking is obviously relationship based and in order to benefit from your network, you need to nurture and feed it. Each staff person should ask themselves every day ‘How did I nurture my network today?’

A network mindset means exercising leadership through active participation, openness, decentralized decision-making and collective action. It means operating with an awareness of the networks the organization is embedded in, and listening to and cultivating these networks to achieve impact. It means sharing by default and communicating through a network model rather than a broadcast model – finding out where the conversations are happening and taking part. It isn’t always easy or fast to do. As CEO of San Francisco Goodwill Debbie Alvarez-Rodriguez points out,[2] becoming a networked NGO requires a change in the way the CEO and their staff do their work on a day-to-day basis.

Getting comfortable with social media and showing a little bit of themselves is the first step for leaders if they want to make this leap to a networked professional. But as Alvarez-Rodriguez and other non-profit leaders have discovered, organizations also need to incorporate networked practices, including having leaders leverage both their professional and organizational networks.

For NGOs, it is also important for boards to lead with a network mindset. This would be an important task for the CNO to manage. Today, there are tools like Board Connect on LinkedIn that can help non-profits leverage the networks of their board members and recruit talent, skills and connections to achieve their goals.

An emerging role
It is important to remember that the role of CNO is an emerging one so it is too soon to assess its impact. But if networking activities are linked to a specific definition of long-term success and interim success indicators are identified along the way, it won’t be long before one can connect networking activities and strategies to on-the-ground impact.

For Bruce Lesley, success translates into child-friendly policies. In order to accomplish this, he and his network need to develop more and better partnerships with policymakers and aligned partners as part of their communications strategy. The short-term result is the way networking on Twitter or other platforms improves relationships with partners and policymakers. The short-term evidence might be in the form of a well-connected network analysis map.

The job of chief networking officer may seem like science fiction today, but that will change with the growing importance of networked strategies to achieve meaningful, measurable impact. Whether it is to integrate the skills and way of working into an existing job or to infuse a network mindset into the organization, becoming networked is the key to success.

Beth Kanter is author of Beth’s Blog (www.bethkanter.org) and of the just-published Measuring the Networked Nonprofit, reviewed in this issue of Alliance. Email beth@bethkanter.org