Progress for third sector in Kyrgyzstan and Laos

A socio-economic development target, incorporated in law, does a good job of ‘inculcating a habit of giving back to South African communities where profits are generated’, according to Gail Walters, head of group corporate affairs and social capital at Hollard Insurance.

Under the country’s Broad-Based Black Empowerment Act (B-BBEE Act), companies donate 1 per cent of their net profit after tax (NPAT) toward socio- economic development[1], as part of a broader regime of transformation, which includes corporate ownership and control participation targets. Officials from three companies told Alliance about the work they do and highlighted the strengths and weaknesses of legislating the parameters of corporate giving.

Corporate giving
Hollard Insurance established its independent Hollard Foundation Trust in 2006, with a focus on the health, nutrition and education of vulnerable children from infancy to nine years of age. The Hollard Foundation’s successful early childhood development programme, called Kago ya Bana, or ‘building together for our children’, is now being rolled out to eight municipalities around the country, equating to about 50 per cent of the children in the target age group, says Gail Walters.

The agricultural services and processing firm, AFGRI, also supports education under its CSI programme. For example, the company pays the salary of a science and maths teacher in a school started by farmworkers near Delmas, a town east of Johannesburg. To help prepare children in the Kanana township near Bethal for school, the company has renovated a day-care centre, for which it now provides food.  AFGRI also works to alleviate poverty and to boost food security. 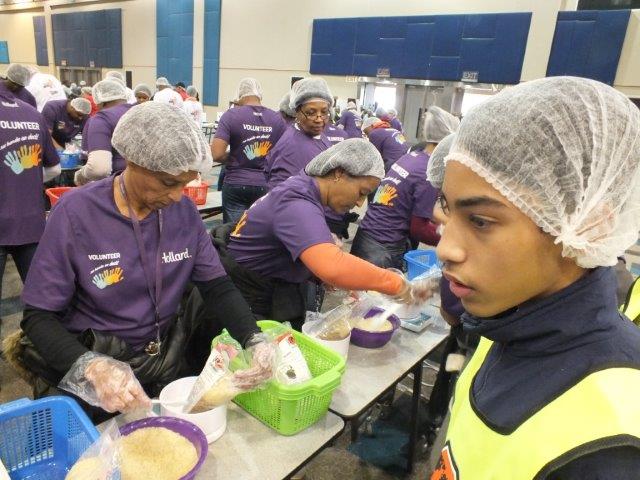 Hollard volunteers participate in a food‑packaging event in celebration of Nelson Mandela Day, in partnership with Stop Hunger Now.

LegalWise, which provides insurance for legal expenses and facilitates access to affordable legal representation, strives to ensure that only projects initiated by communities themselves receive the company’s NPAT funding, says Lesley Haynes, corporate social investment manager.  In one recent example, LegalWise helped build a 120-square metre high school library in partnership with a community called Woodford, in Bergville, KwaZulu Natal, according to the website. That community raised R20,000 and contributed volunteer work to the project.

Limits of legislation
The law is not perfect. Compliance-focused companies may only support causes that will earn them points, which could result in NGOs operating outside of those areas suddenly being without funding and struggling to meet the needs of their stakeholders. ‘A balanced approach is what’s called for,’ says Gail Walters.

Points under the B-BBEE Act awarded for socio-economic development (SED) are small compared with other B-BBEE goals and some companies may decide to forgo spending in this area, while spending more in other areas, says Haynes. Under the law, SED represents just 5 per cent of a company’s overall B-BBEE rating.  ‘It is human behaviour to resist what is forced upon us and unless philanthropy is part of a company’s DNA, no amount of legislation will result in a significant change to poverty levels in South Africa,’ she says.

Indeed, most companies ‘give the bare minimum to ensure that they comply with the legislation’, says Mpati Mojapelo, CSR manager at AFGRI.

The target is ‘a way of forcing companies to realise that inclusive, sustainable growth is the cornerstone of business: without markets and customers, business cannot exist’, says Walters.

‘It works best when companies support what communities are already doing for themselves,’ says Haynes.  ‘CSI that supports communities in their own development ensures a collaborative approach and appreciates the assets that all parties are able to bring to the table,’ she says.

The target is especially important ‘for corporations that would not have participated in corporate social investment if there were no legislation requiring them to participate’, says Mojapelo.

An enabling environment for ‘informal philanthropy’?