Global health: is the concentration of funding on HIV/AIDS skewing health systems in developing countries? 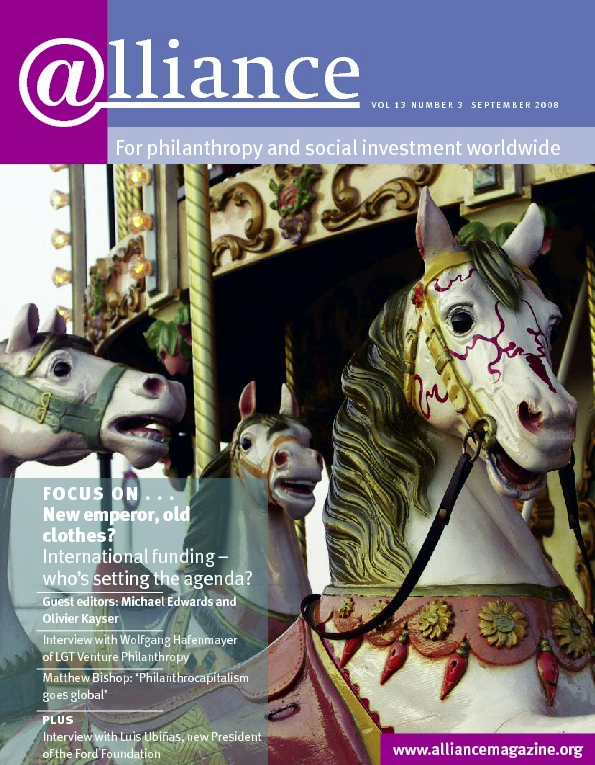 Doing ourselves out of a job?

For nearly 20 years, HIV/AIDS has been the centre of the global health universe. Billions of dollars of aid, public and private, have flowed from North to South to address the pandemic – while the number of infected continues to rise faster than the number receiving treatment. The annual global AIDS conferences remind us that more needs to be done to bring HIV under control. Any attention not devoted to HIV is usually captured by TB and malaria, collectively known as the ‘“Big Three’.

And yet more mundane diseases like diarrhoea, pneumonia and intestinal parasites sicken, maim or kill far more people than the Big Three. These ailments also have relatively simple and cheap treatments. Is the focus on HIV by global health funders, public and private, skewing health services and systems in developing countries? Is the focus on HIV merited or is it causing as much harm as good? Can philanthropy do more good for more people by focusing on other diseases or by improving health systems rather than focusing on a single health issue? Tim Ogden

Integrated funding is best for all

The single-minded focus by funders on HIV/AIDS for the last decade has unfortunately undermined health systems. By insisting that funds be spent only on HIV/AIDS and demanding immediately measurable results, the global fight against AIDS has made real progress in rapidly increasing the number of people receiving treatment. At the same time, it has created a parallel system of NGOs and health services while weakening the existing health infrastructure in many countries. The best and the brightest have unsurprisingly gone where the funding is, while routine care for every other community health issue has been left to whither. While the focus on HIV is certainly not undeserved, as we move forward and look for innovative ways to improve global health, our focus should not be on how we ‘solve’ one disease at the expense of others, but rather how we can integrate our solutions to improve the health of over a billion of the world’s poorest people.

Neglected tropical diseases (NTDs) and diarrhoeal diseases, for instance, represent a comparable health burden to HIV/AIDS. NTDs are a group of 13 bacterial and parasitic infections that represent the most common afflictions of the world’s 1.4 billion people living on less than $1.25 per day.[1] Because they are not public health problems in the North, and maim or disable rather than kill, they do not receive as much public – or indeed funder – attention.

However, when measured in Disability-Adjusted Life Years (DALYs), NTDs represent a greater public health burden than malaria or tuberculosis, and are nearly as burdensome as HIV/AIDS. In fact, in many countries and regions NTD infections vastly outnumber HIV infections: while there are approximately 22 million people living with HIV in Sub-Saharan Africa, over 500 million are infected with one or more NTDs. In Rwanda, approximately 150,000 people have HIV, but at least 3 million Rwandans have at least one NTD, and more than 75 per cent of children are believed to be infected with intestinal worms, which while not deadly will impair these children for life.

These ‘other’ health issues are also relatively cheap to address, both pharmaceutically and logistically, especially compared to what’s required for the “Big Three.”

This process improves both NTD-specific treatment and the efficacy of future health interventions, often in the most hard-to-reach communities. According to a WHO study, integrated interventions delivered through a community-based approach double the coverage rate for malaria treatment and bednet usage when combined with treatment for NTDs. There’s also evidence that many of the diseases ignored by the HIV/AIDS funding community contribute to HIV infection, either directly by making people more vulnerable to infection or indirectly by contributing to the social breakdown that provides the perfect environment for HIV/AIDS to spread. It’s clear that a more balanced and integrated effort to combat disease will also provide benefits to the fight against AIDS.

Our funding mechanisms for health must be innovative. We need to connect implementers, donors and afflicted communities to increase access to medicines that can halt the spread of common infections such as NTDs, while also improving the efficacy of other interventions and strengthening health systems. This isn’t just a nice theory. The Global Network for NTDs has already had success in places like Rwanda, catalysing international investments to improve global health through a new, decentralized funding model that empowers communities and encourages synergies with other disease control programmes on the ground.

In today’s constant battle for limited public health resources, funding HIV/AIDS alone is insufficient, because over a billion people will still be plagued with chronic and debilitating infections. Since community-based delivery can address multiple needs effectively, we can harness the synergies between funding and control for NTDs, HIV/AIDS and other diseases to make true progress in lifting the world’s poorest people out of poverty.

1 For a full list of citations, please visit http://globalnetwork.org/press/2009/alliance-article

The Bill & Melinda Gates Foundation has announced a $34 million grant to the Global Network for Neglected Tropical Diseases. The Network will use the support from Gates and other donors to help control and reduce the effects of the most prevalent neglected diseases including trachoma, hookworm, river blindness, snail fever and lymphatic filariasis. Speaking at the World Economic Forum in Davos in January. Bill and Melinda Gates challenged Forum participants to review the neglected tropical disease ‘investment book’ developed by the Network, which has mapped out the potential health and monetary benefits to be gained from specific NTD investments.

In favour of targeted HIV/AIDS funding

Now is not the time to stop

When the UN Secretary General Kofi Annan challenged governments around the world to set up a global fund for HIV and AIDS interventions in 2001, the severe impact of the HIV and AIDS pandemic in developing countries in terms of lives lost, children orphaned, increased burden on health systems, and the social and economic impact on individuals, families, communities and nations necessitated unprecedented efforts to provide rapid, targeted responses.  There was little dispute at the time that concerted emergency action was vital.  While the pandemic highlighted the weaknesses of health systems and their incapacity to respond effectively to the growing needs, making extra resources available to these cumbersome, bureaucratic and conservative systems would inevitably have obtained results only in the long term without tackling the immediate emergency.

The progress that has been made in response to Kofi Annan’s challenge would not have happened if this approach had been taken. Though much has been done, it is still not enough. Targeted global funding for HIV and AIDS programmes cannot stop now when the number of new infections still exceeds the number of people newly able to access adequate and appropriate care, treatment and support.

What has been achieved?

The considerable resources that have been brought to bear for HIV and AIDS programmes through the Global Fund for AIDS, TB and Malaria, PEPFAR, the World Bank’s Multi-Country HIV and AIDS Program (MAP) and other multilateral and bilateral agreements and private foundation initiatives have tackled the immediate emergency, reducing death rates, providing treatment and increasing prevention efforts.

NGOs and grassroots organizations strengthened
They have also had a positive impact on other sectors, as HIV and AIDS is not just a public health problem but affects social and economic sectors as well. If global funding had been destined to go only to existing health systems, funds would not have been allocated to NGOs and faith-based organizations that in reality provide from 40 to 50 per cent of health services in most developing countries. Grassroots organizations would not have been strengthened and empowered either, as they have been through concentrated HIV and AIDS funding. Many of these organizations have been able to successfully address the main barrier to ART adherence, ie indirect costs born by users themselves (transport costs, out-of-pocket costs, some diagnostic costs).

The burden of care reduced
Resources have also been used to promote and develop alternative strategies for the provision of chronic care such as home-based care and palliative care, thereby relieving the burden on hospitals, in which, prior to the advent of ART, at least 50 per cent of beds were occupied due to AIDS. The rapid scaling up of ART has also reduced morbidity and mortality rates, further reducing the burden of care, not only on hospitals but also on families and communities.

Beneficial effects on health workers
One direct beneficial impact on the workforce of most health systems is that HIV-infected health workers accessing ART are still alive and working in systems in which any further loss of manpower would be disastrous. 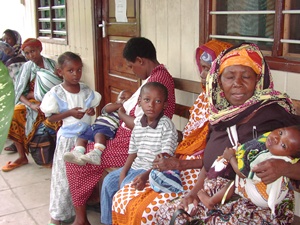 HIV and AIDS programmes have also helped address one of the thorniest issues in many developing countries, the shortage of trained health workers. Training and the use of incentives have improved the quality of care, while task shifting has allowed the reorganization of tasks among professional health workers by delegating medical and health services responsibility from higher to lower cadres of health staff and to non-professionals, for example by using community health workers and volunteers to provide prevention education, counselling and support to those in need.  Medical doctors therefore have more time to manage complex cases and improve the quality of care.

Increased awareness of the need for better health care
The concentration of global health funding on HIV and AIDS has drawn public attention worldwide to the need for universal access to primary health care and for governments in developing countries to invest more in the health of their nations. More governments are now being held accountable by their citizens for the miserable amount of funds being allocated to the health sector generally. The issue of equity, or lack of it, in most developing countries is more visible, and global HIV and AIDS funding has tried to address this through targeted interventions for those vulnerable groups that are most at risk of infection and that are more likely to infect others, with an emphasis on the specific needs originating from gender differences. HIV and AIDS programmes have promoted more awareness about individuals’ responsibility for their own health and more active participation of beneficiaries in decision-making, lobbying and advocacy.

Targeted HIV and AIDS funding has already benefited aspects of developing country health systems: procurement and supply, basic infrastructure, training of health workers, public-private partnerships and health information systems. It has also provided an impetus to governments to expand improved strategies and systems to other areas of health. Now is not the time to stop it.

Public sector spending reductions imposed by structural adjustment policies of the 1980s have contributed to the decline of public healthcare systems across the continent. With this decline compounded by increasingly burdensome external debt, few Sub-Saharan African nations have been able to rebuild their failing healthcare systems. The result has been a mushrooming of private clinics and health facilities which service elite classes and ex-patriot communities, but are inaccessible to local populations. Targeted HIV/AIDs funding has in many ways helped to resurrect basic healthcare infrastructure, including procurement and supply chains, as well as training of health workers.

However, neglected tropical diseases as well as new health risks, including diabetes and cancer, continue to afflict local populations, in some cases more significantly than the HIV/AIDs epidemic. Healthcare funding should therefore aim to improve public healthcare systems as a whole rather than focusing on specific diseases. In this way, healthcare systems will regain the sustainability and autonomy necessary to respond to the needs of local communities and prioritize diseases and treatments according to the context.