Partnering with a social movement as a strategy for scale

For millions of people, waste picking represents the last, desperate option for surviving by working, not begging. Living off people’s garbage, waste pickers are often seen as garbage themselves, excluded socially and exploited economically. Yet, paradoxically, they make a great contribution to our societies. If the world is to move towards a sustainable model of development, recycling waste will become one of its critical building blocks. Supporting the development of waste pickers’ organizations thus presents a great opportunity to fight poverty and improve the lives of an increasingly large and important group of workers.

The potential for social change 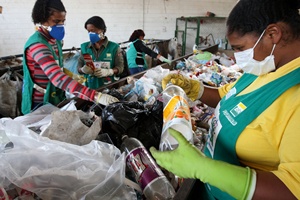 The Brazilian National Movement of Waste Pickers (MNCR) was formally established in 2001, on three founding principles: eradication of waste dumps and child labour in them; payment for waste pickers’ services; and investment in the development of their enterprises. Beside representing its members and carrying out advocacy activities, MNCR also organizes local productive clusters. These share technical assistance and services and create joint commercial outlets for recyclable materials, thus reducing costs, increasing productivity and scale, and obtaining better prices by selling directly to the industry. These clusters also interact with local authorities in order to gain access to basic social services for members and their families.

However, though it comprises over 400 associations and cooperatives, MNCR reaches only a little over 5 per cent of Brazil’s total waste pickers’ population, which is estimated at 800,000. More widely, studies indicate that less than 10 per cent of waste pickers in Latin America are organized in cooperatives or other forms of association. Working with the waste pickers’ movement to increase the proportion who are organized and strengthen those organizations thus represents a huge opportunity for achieving large-scale social change among a population of the very poorest.

The challenges of working with a social movement

Seeing the potential of this emerging movement to address poverty, in 2003 AVINA established its Solidarity in Sustainable Recycling initiative. In addition to potential, however, there were challenges.

Supporting a social movement is quite different from financing an NGO or a project. Social movements are much more dynamic and encompass greater tension and diversity of leaders and leadership styles. We soon realized that readiness to take risks is crucial for the development of this sort of strategy: without it no innovation will happen. Just as important is flexibility: by adapting internal procedures to the dynamics of social change and investing in areas/initiatives that other organizations will not invest in such as advocacy/lobbying, networking/dialogue building, new business models, seed/angel capital, AVINA can make the best use of its resources while allowing for new paths/solutions to emerge.

At the same time, it is important to keep focus. The dynamic nature of the process means you have to strike a difficult balance between adhering to too rigid a view of the concept on the one hand and losing sight of the underlying aims on the other. Finally, we found that it was critical to develop relationships based on trust and mutual respect which recognized the different strengths that each partner brings to the table in order to advance towards a common goal.

The role of AVINA

While there was great potential for scaling up the impact of the movement, it lacked the means to do so without specific types of support. In order to respond effectively, AVINA’s key roles have included fostering dialogue among diverse actors and sectors, promoting the building of common action agendas, investing and leveraging new resources, building bridges and alliances with global actors, and promoting shared knowledge to support learning and innovation.

Coming from a business background, AVINA has always believed in bridge-building, particularly between the social and the private sector. As Luiz Henrique da Silva, one of the waste pickers involved, remarked, ‘AVINA helped us understand the way companies see us and our work … it also helped us enter their offices, sit at their meeting tables and discuss our future, as partners.’

AVINA saw empowering the waste pickers, and creating the conditions for them to occupy the leading role in a process of broadening the discussions to areas such as industry and economic affairs, as the only way to create scalable, lasting change.

In March 2008, together with other organizations, AVINA supported the 1st World Congress of Waste Pickers. Hosted by the Latin American Network of Waste Pickers, the event was held in Bogota, Colombia, and brought together representatives of waste pickers from 32 countries. This gave the issue a global perspective and helped share lessons and experiences across continents.

It also brought it greater visibility, attracting new and key supporters.  In October 2008, AVINA and the Bill & Melinda Gates Foundation established a five-year co-funding alliance in the amount of US$5 million to  help the development of three main strategies:

Also in 2008, AVINA and MNCR signed a US$7.9 million agreement with the Inter-American Development Bank’s Multilateral Investment Fund, ICCO, Coca-Cola and the Brazilian government for the Socioeconomic Integration of Collectors of Recyclable Materials programme – dubbed Cata Ação. The partners will work for the development of waste pickers’ cooperatives and their communities in five cities in Brazil over the next four years. AVINA and the IDB are also designing a platform to connect their efforts in this field in the region as well as to coordinate with other partners.

One of the unanswered questions relates to measuring impact. Investment by the Brazilian government via the National Bank for Economic and Social Development (BNDES) and Banco do Brasil or the development of electric carts to make waste pickers’ work less hard seem to be clear evidence that a lot has changed. The growing numbers of municipalities that are formulating their waste management programmes and policies together with waste pickers seems to be another good indicator. But hundreds of people made redundant by other sectors continue to turn to waste picking, and this makes the situation so fluid – and informal – that measuring how many people’s lives are affected by one’s investments/efforts is a challenging goal indeed.

This is the regional initiative through which Fundación AVINA works in this area in the countries where it operates. Together with waste pickers and other strategic partners, it works for the inclusion of millions of waste pickers in a sustainable management of waste. This vision includes:


AVINA also supports waste pickers in building a vision for the future and in the presentation and validation of their proposals to a wide range of audiences. It has invested approximately US$3.2 million since 2003.

Photo caption: Roberto Laureano da Rocha has been working as a waste picker for the past 20 years, since the age of 16. He is now a member of the national committee of MNCR.