For years, we in the climate movement struggled to find actions to match the scale of the problem. Changing lightbulbs, more bike riding and less flying were insufficient. Through the fossil fuel divestment movement, we are operating at a scale big enough to matter. Moreover, you don’t have to be an investor to call for divestment. The movement includes thousands of activists all over the globe, who are asking boards of trustees of universities, pension funds, municipal funds and private investors to rid their portfolios of fossil fuel investment. Foundations – some of them – are playing an important part in this, too, by supporting those activists and by shedding their own investments. We’d like to see more of this.

The fossil fuel divestment movement took its inspiration from the divestment movement that helped bring down the Apartheid regime in South Africa. Like that movement, it provides a clear way for individuals and institutions to make a moral choice about a critical question of the day. To date, more than $3.4 trillion of assets under management have made a divestment commitment of some kind.

350.org became involved in this effort in 2012 with the ‘Do the Math’ tour, helping to launch more divestment campaigns in the US. Now we are working towards divestment victories on every continent save Antarctica. Three months before the COP21 Conference, we attended a Divestment Conference in Paris organized by the European Green Party. It illustrated how far the movement had come. We heard how, in the Netherlands, Urgenda had sued the government for its inaction on climate, and won. We met divestment leaders from Belgium, Switzerland and throughout Europe who are working to convince pension boards and local authorities to divest. Different battles are being fought in different places and that is precisely the strength of the divestment effort. It is distributed organizing, tied together with a simple but powerful demand: to de-legimitize the fossil fuel industry and force institutions of conscience to pick sides.

‘Different battles are being fought in different places and that is precisely the strength of the divestment effort. It is distributed organizing.’

At the time of the Paris Divestment Conference none of us had any idea that the call for ‘1.5 to stay alive’ would take hold and find its target in the final agreement. That cry had animated the first years of our fight at 350.org (our name is taken from 350 parts per million, roughly equivalent to calling for 1.5°C of warming). 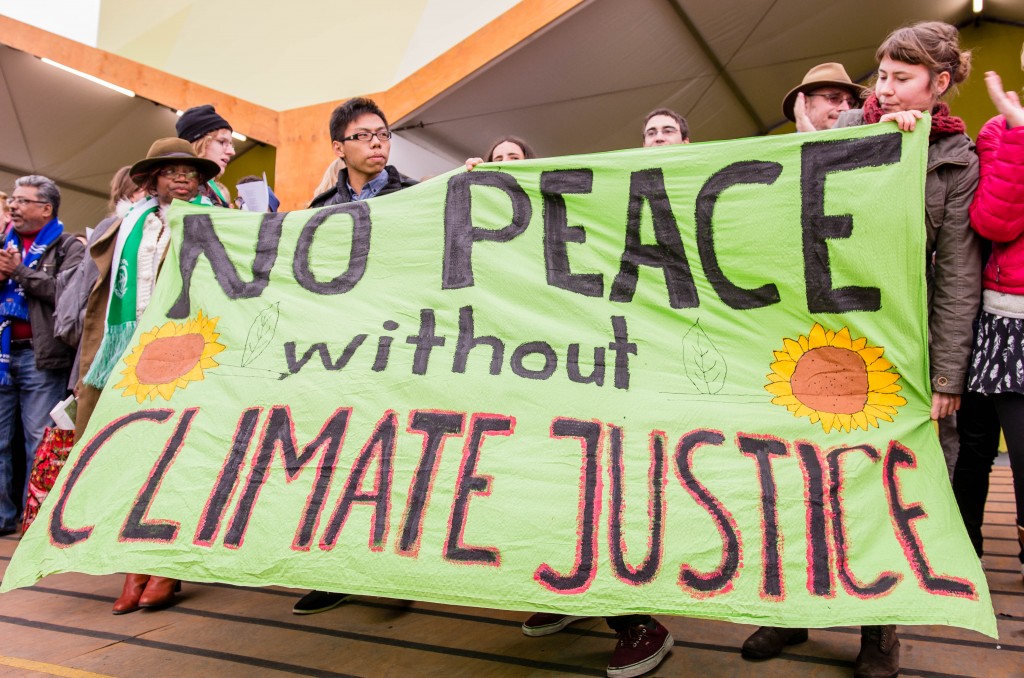 Philanthropy’s contribution – actual and potential
The divestment movement is a movement of great diversity. It has taken off on hundreds of university campuses, in faith communities, in cities and among foundations.

‘In the coming years, we want to see more action from foundations both as investors themselves divesting from fossil fuels and as funders of work on climate change.’

Foundations have been critical to the movement’s growth but we think they could play an even bigger part. In the coming years, we want to see more action from foundations both as investors themselves divesting from fossil fuels and as funders of work on climate change. The Rockefeller Brothers Fund and Wallace Global Fund helped lead the divestment charge, one by symbolically divesting an oil fortune, the other by organizing peers to follow their lead. The Divest-Invest initiative has drawn dozens more foundations into the movement.

The scale of philanthropy directed towards climate change now needs to increase given the severity of the issues. We are particularly glad to see growing support for movement-building efforts and grassroots organizing.[1] Efforts such as the Building Equity and Alignment Initiative in the US have helped push in this direction and we are excited to see what Oak Foundation’s climate justice initiative will bring to the table. We attribute many of the shifts in climate advocacy – indeed, the ability to achieve a global agreement – to a more powerful and diverse lobby to combat climate change. Many foundations have contributed to this, and many of them are the same ones who have taken up the call to divest.

‘”Big philanthropy” is not sufficiently involved. Many foundations, including some of the largest environmental funders, have not divested from fossil fuels – though we know the topic has been raised in many a boardroom.’

So far, however, ‘big philanthropy’ is not sufficiently involved. Many foundations, including some of the largest environmental funders, have not divested from fossil fuels – though we know the topic has been raised in many a boardroom. Some see it as a sort of gesture politics, and gesture for gesture’s sake is indeed not useful, but in this case it’s a gesture that matters politically.

The divestment movement has helped to bring into the mainstream the basic argument that we must leave carbon in the ground. Three years ago it was primarily divestment campaigners making this point; by Paris, it was the world’s central bankers and diplomats. By adding its weight to the movement, philanthropy can help build greater momentum. Using research to further advocacy is one approach. For example, the Canadian research group Corporate Knights pioneered an important study calculating the potential loss in portfolio gains for foundations that did not divest.

‘We would encourage all foundations that support climate advocacy of any kind to sign the Divest-Invest pledge and take the necessary steps to jettison portfolios of oil, coal and gas investments within five years.’

Moreover, divestment itself encourages and supports the climate change movement; it builds leadership. We would encourage all foundations that support climate advocacy of any kind to sign the Divest-Invest pledge and take the necessary steps to jettison portfolios of oil, coal and gas investments within five years.

Keeping the movement moving
Following COP21, we have an agreement that leaves us wanting more. Activists and social movements will use the Paris Agreement to force the action we need. We are looking ahead to waves of mass actions that will target the world’s most dangerous fossil fuel projects in order to keep oil, gas and coal in the ground, and accelerate the transition to 100 per cent renewable energy. Everywhere, we will call attention to how it cannot possibly be compliant with what was agreed in Paris to then allow, say, 50 new coal plants in Turkey, continued oil development in Nigeria, or massive gas build-outs in Brazil.

Movements move – so, pleased as we are to have left Paris in 2015 with an agreement, we are even happier to be dusting off our marching clothes to get back onto the streets. And we’d like philanthropy with us, in body as well as in spirit, supporting our cause and leading by example.

May Boeve is the executive director of 350.org and Bill McKibben is the founder. Emails may@350.org and bill.mckibben@gmail.com

For more information
Information on all active campaigns can be found at http://www.gofossilfree.org