Rebuilding communities from the ground up

CauseWired: Plugging In, Getting Involved, Changing the World

The founders of the Louisiana Disaster Recovery Foundation (LDRF) knew from day one that their job was more than providing food, water and shelter for those who had suffered the worst of the aftermath of hurricanes Katrina and Rita. In fact, the mission agreed upon was ‘to transform the disaster … into an unprecedented opportunity for a new Louisiana – providing resources for the relief, recovery and betterment of all its people by ensuring access and opportunity in rebuilding their communities and culture’. A side-effect of the catastrophe was that it provided an opportunity to put forward solutions to long-standing challenges that were not viable before the disaster.

These challenges were apparent long before Katrina and Rita exacerbated their effects. The poverty, racism, sanctioned economic apartheid and divestment from institutions that support equitable access to opportunity that have kept Louisiana among the bottom five states in the US in terms of quality of life indicators have long been facts of life for too many.

Furthermore, the region’s non-profit infrastructure was one of the country’s least robust. Community-based non-profits serving communities hardest hit by Katrina and Rita were under-resourced, disconnected from support networks, and likely to have suffered physical damage. We were aware that any strategy for holistic recovery from the effects of Katrina and Rita must first take into account the considerable toll these things had already taken on communities and the local organizations striving to serve them.

A key first step in LDRF’s response to Katrina and Rita was analysis of opportunity. Because of the catastrophe, opportunities to invest in people and strategies emerged that had previously lacked adequate support. LDRF’s challenge was to identify which problems could be addressed most effectively with the resources at our disposal. Who had to be activated to drive solutions? Which power dynamics would have to be contested? What would success look like?

LDRF looked at existing analyses that we hoped would underpin a theory of change. This approach was supported by non-profit and community leaders who often remarked ‘we already know what’s needed… we’ve known it for years’. LDRF also worked closely with data-generating organizations such as the Southern Poverty Law Center, PolicyLink (a national research institute dedicated to advancing socioeconomic equity) and the Greater New Orleans Community Data Center, which were measuring the changing landscape of community needs as the recovery progressed.

LDRF’s work also benefited from the invaluable support of national foundations committed to equity, citizen engagement and development of social infrastructure, such as the Ford Foundation and the Annie E Casey Foundation, as well as the game-changing support provided by the Bush-Clinton Katrina Fund.[1] But the most valuable source for LDRF’s analysis was members of the affected communities.

From this source, LDRF identified citizen engagement as one of the most pressing challenges. Hasty policy decisions were being made that were certain to cast a long shadow on the prospects of low-income communities across the Gulf Coast. For example, administration of federal recovery dollars prioritized homeowners over renters, single family homes over multi-family complexes, and large corporations over small businesses. State and local governments were awarding lucrative rebuilding contracts to out-of-state businesses while thousands of qualified Louisiana residents were desperate to work. In the first election following the storms, local government made no provisions to accommodate tens of thousands of displaced voters – most of whom were low-income African-Americans.

It was clear that unless there was a drastic change, those without power would not be able to participate equitably in decisions that would affect their families and communities for generations to come. While under-resourced neighbourhoods and communities lacked political power, LDRF realized that building their capacity would enable them collectively to develop and advocate for shared agendas. In partnership with the Ford Foundation, LDRF launched the Neighborhood Organization and Planning Fund, which has helped dozens of community groups to collect, organize and disseminate resident input. This has in turn helped displaced residents return and rebuild; enabled organizations with shared agendas to form coalitions; and helped citizens to influence the outcomes of the New Orleans Master Plan, the municipal planning document that, once approved, will have force of law for 20 years.

LDRF’s support of citizen engagement is closely linked to its commitment to strengthen the state’s ailing non-profit infrastructure. LDRF knew that non-profits would play a key role in empowering citizens and connecting them with the information and resources needed for their recovery, but that they would need considerable capacity-building support to handle the tasks before them.

This already under-resourced sector was hit hard by the storms, losing employees and donors to displacement, and physical infrastructure to wind and water. LDRF supported the Louisiana Association of Nonprofit Organizations (LANO) to provide organizational triage (assessing which non-profits were most in need of support after the storms), planning and technical assistance to help rebuild the non-profit sector in New Orleans and statewide. 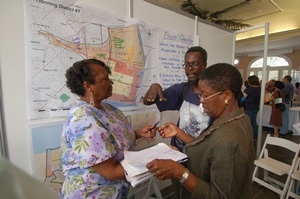 Another issue that clearly intersected with LDRF’s mission and resources was the right to return, which, due to inequities in the Road Home Program,[2] city planning efforts and the US Department of Housing and Urban Development’s (HUD’s) housing voucher system, was not being extended to many low-income families displaced by the storms. LDRF’s successful bid for the Louisiana portion of the Bush-Clinton Katrina Fund enabled us to support local non-profit housing developers committed to rebuilding homes for low-income families and special needs individuals who wanted to return, but were prevented from doing so by high prices in the post-Katrina construction economy. (The photo shows residents of New Orleans’ 7th, 8th and 9th Wards working with housing advocates to plan their return to the city.)

On the policy front, LDRF was able to join forces with the Stuart H Smith Loyola Law Clinic and Center for Social Justice (a cutting-edge university-based legal rights organization), PolicyLink and Oxfam to promote reforms to the Road Home Program. This resulted in more equitable grant allocation and extension of application and appeal deadlines to residents dealing with tricky succession issues.

Knitting the threads together

Knitting the threads of various programming and policy efforts together into a whole cloth that strengthens the fabric of entire communities has been a key strategy for LDRF. We wanted to see not only whether a given investment would further our mission in a particular area, but also whether it would leverage other investments and contribute to a holistic, long-term improvement. For example, LDRF’s support of disadvantaged businesses has created opportunities for minority-owned businesses and contractors to participate in rebuilding affordable housing. This has provided much-needed homes for low-wealth families and promoted economic stability in those same communities by creating decent jobs and workers who will spend locally. Further, LDRF’s support of policy that mandates preference for local businesses and minimum requirements for hiring qualified minority- and women-owned businesses for government contracts ensures that advances in this area will be institutionalized.

The response to recent disasters such as the Haiti earthquake and the BP oil spill reflects many of the lessons learned in our experience of Katrina. Groups representing and largely comprising residents of low-wealth communities have demonstrated greatly increased capacity to advocate effectively for their rights in the wake of disaster. This was particularly evident in community development organizations’ response to the contracts BP attempted to foist on local fishers, the small print of which required workers to waive their rights to litigation if they accepted temporary employment helping with the clean-up. Mostly due to citizen-led advocacy, BP quickly revoked this clause of the contracts.

Though there is still progress to be made, we also see local government entities responding positively to this citizen input and modifying how they respond. As a result, critical information can be gathered and services delivered in a more humane manner, such as providing food assistance in the form of preloaded debit cards rather than making those in need stand in line for several hours to receive vouchers. The federal government has also recognized the value of including community input into its planning process. Obama’s Disaster Recovery Working Group and HUD Secretary Shaun Donovan have both reached out to LDRF to convene local recovery leaders with federal team members for the purpose of gathering ideas on what works on the ground.

We still have a long way to go towards ensuring human dignity and equitable rebuilding and recovery in the wake of disaster, but I am heartened to see that the practice of democratizing recovery by including grassroots input is gaining ground.

2  The Road Home Program is the largest single housing recovery programme in US history, administering $4.2 billion in federal recovery dollars to assist Louisiana homeowners affected by hurricanes Katrina and Rita.