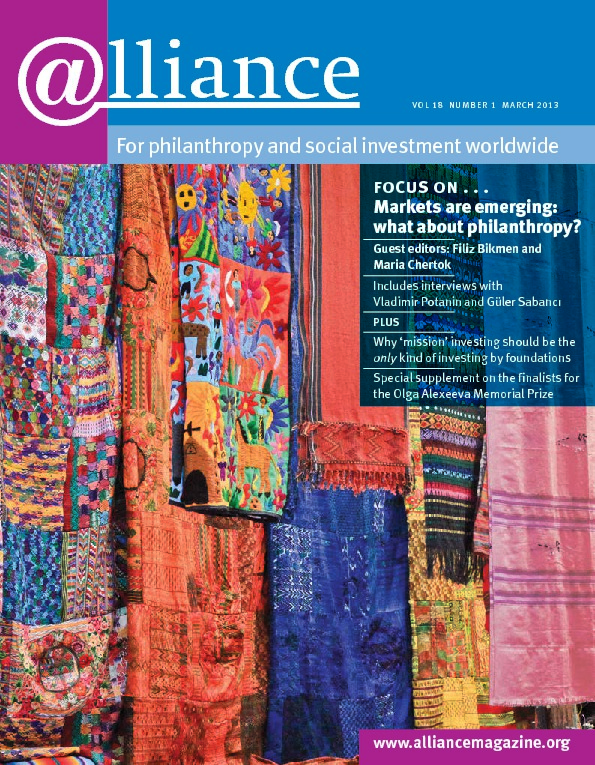 This article is based on those nominations for the Olga Alexeeva Memorial Prize that did not make it to the shortlist for the reasons explained in the special supplement in this magazine. Many of them nevertheless present extraordinary thinkers and doers, and this article is a way to do justice to them. All the quotations used are from the nomination forms. We see great value in preserving their words, though we have not named the writers. Deep gratitude goes to all the nominators who took the time and trouble to put together excellent nomination materials, and our admiration to all those nominated, shortlisted or not.

It seems to be part of human nature to perceive new things through the lens of existing categories. It helps us keep our world in order. While this may work well for established situations, if we look at the institutions and processes of emerging markets philanthropy, we should open our minds to totally new concepts and be prepared to see the most unusual mixes of shapes and colours. This is what struck me when browsing through the 41 prize nominations from various parts of the world.

The common-sense idea of philanthropy is all about private wealth being voluntarily redistributed for the public benefit or – in a more trivial sense – providing assistance to those who are less well-off than the philanthropists themselves. In this paradigm, philanthropy development involves encouraging more wealthy people to give, and to give more generously (and more thoughtfully, if we are ambitious enough). Initiatives like the Giving Pledge or the day-to-day work of the philanthropy development and advice industry – from specialized non-profits to private banks – make up this segment in the settled philanthropic market, and the impact of their work is impressive.

The approach is broadly relevant for emerging market countries too, because wealth creation and accumulation is an important consequence of the ‘emergence of markets’. But in these markets, the various strategies philanthropy building – raising the profile of giving in society, developing the professional capacity of people and institutions, experimenting with culturally appropriate models, promoting best practice, and working with individual philanthropists to provide inspiration and confidence – all take place in environments that are not particularly supportive. This is why it is hard to overestimate the efforts and leadership of individuals like one of our nominees from Latin America:

‘who can be considered a founder of modern philanthropy in the region, helping civil society regain its role after the fall of military regimes in several countries … a visionary social entrepreneur who brought innovation to address business philanthropy, family philanthropy and community philanthropy; defining models and processes of assistance to help donors in their decision-making; educating young professionals to support philanthropy; establishing benchmark organizations for a continuing process of growth and development of Brazilian and Latin American philanthropy.’

In trying to capture her power to convince people of the value of giving, a friend of mine once called Olga Alexeeva ‘an evangelist of philanthropy’. People like Olga and many of our nominees arise not because of an existing demand for their services but to build the field from scratch, like another nominee from South Africa:

‘who is currently involved in developing a long-term strategy to promote philanthropy in South Africa in line with the mission to build an enduring culture of “giving” that results in a strong and stable society and democracy in South Africa.’

The inspiration that role models provide to the rich is widely exploited in established giving cultures. Good evidence that personal example works everywhere is a philanthropist from India, a retired CEO of an IT company and chairperson of an Indian NGO:

‘Her ability to articulate her passions and the personal happiness and peace she exhibits in her demeanour and way of speaking are the best possible advertisement for the joy of giving. I know of several people who have been inspired by her example to embrace philanthropy in their own lives.’

But there are lots of examples where wealth is not involved that can nevertheless be described as philanthropy development. One of the greatest revelations of the nominations I browsed through was that philanthropy often comes from beyond the world of big sums, and it is fascinating to observe what drives it. Sometimes it is a personal story, like the story of:

‘a young man from Kenya [which began] in the year 2006 when at 18 years he mobilized 10 of his friends for a walk that aimed at helping his family raise money to help his ailing mum … to undergo a kidney transplant. They covered 120km each, hence collectively covered a distance of 1,200 km, which is what he estimated to be the distance his mum would have walked during her daily chores at home for the 3 years she was sick. As a result of this initial walk many more Kenyans of good will joined him to establish a foundation with the vision of a healthy, health-conscious society … He literally turned what was a family tragedy into a national remedy, through his foundation.’

Or it could be that what is essentially a community development project reinforces its core mission by building donors’ trust and respect for recipients, establishing a dialogue that never existed before and making giving more meaningful. The real change that this approach brings to the community affects donor behaviour and inspires the community to work together for a common purpose. A story of an Indian social worker from Rajasthan is a great example.

‘When she took me around the deserts of Rajasthan, the one thing I could see for certain is that givers really don’t know what’s best. The people who know best are those Rajasthani villagers living on less than £1 a day. The woman who runs her household on that sort of income is a world-class economist. She knows exactly whether to spend a few rupees on sending her kids to school, or on buying dal lentils, or on securing grazing for her cow … That is what she taught me. And you know what – she didn’t even realize that she was teaching anything because what she does is from her very soul. Initiative unbounded and inspiration unparalleled – give people a voice, show them what’s available, and watch them change their own lives.’

In many emerging market countries, huge economic opportunities coexist with gross inequality. That is why for many of our nominees philanthropy is not just about giving but about promoting social change. A good illustration of this is a nominee from Mexico:

‘who has grasped that for social change to occur, not only must civil society organizations be strengthened … but also social investment must become more strategic and oriented toward social change. Better than anyone else in Mexico, she has not only understood the complexity of these interconnected challenges but she has worked tirelessly to address them.’

Another nominee, who is engaged in developing community philanthropy in Central and Eastern Europe, takes the idea of social change down to the community level:

‘Through her work, she has contributed with professionalism, energy and commitment to the advancement of organized philanthropy in Romania and the region. This work provides an infrastructure for local communities and private individuals to engage in social change and take responsibility for their environment. This is an important change in social attitudes in Romania.’

Community philanthropy is the area our nominees most frequently devote themselves to, carefully weaving it into the fabric of local culture and tradition, focusing on giving other things than money and building philanthropic behaviour from scratch in very difficult conditions. This is exactly what our nominee from Palestine does, in a place where:

‘there is religious charity and there are corporate public relations, but the idea of community investment and mobilizing Palestinian resources (local, corporate and diaspora) is something that this organization is pioneering, with her at the forefront … She is keenly and intuitively aware of what will “fly” in the local culture, and what steps need to be taken before philanthropic initiatives will be seen as credible …  She knows what each individual can best contribute and uses her charismatic persuasion skills to encourage people to give … Her focus on giving, not on money, expands the definition of what it means to give (ideas, volunteerism, material goods, etc) and reveals a world in which givers and receivers are not related by hierarchy, but where everyone is a giver and a receiver, and both are dignified.’

It is amazing how many different shapes and colours philanthropy development takes, building institutions, creating public trust, developing a supportive environment, encouraging individuals, reviving communities, promoting best practice, educating donors and nurturing leaders. But at the end of the day without passionate leaders – evangelists like Olga Alexeeva and the people who were nominated for the Olga Alexeeva Memorial Prize – all these ideas would be no more than an empty sound. However different the things these people do and where they live, I have a feeling that we are witnessing the emergence of a new cohort of people from all continents walking in the same direction.

Maria Chertok is executive director of CAF Russia and a guest editor for this Alliance special feature. Email mchertok@cafrussia.ru

Why VPP decided to experiment with networked philanthropy